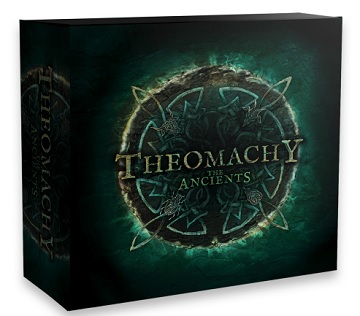 When gods fight, human blood flows. Theomachy lets you take the place of a high god – lord of a group of devoted followers. Now is your opportunity to face off Poseidon against Ishtar! Thor against Cthulhu! Morrigan against Yog-Sothoth! You have one goal and one goal only: annihilate your foes' believers and seize absolute power.

Achieve this task by staking the souls of your followers, using the same bluff, psychology, and tactics that have made Texas Hold 'em Poker the world's premier card game. Once you seize victory, you can rest, and listen to the cheerful song of your people. You have won the clash of the gods. You have won Theomachy.

The game is quick to play – typically less than 45 minutes. First, choose your god. Then, drafting cards into your personal deck lets you slowly build your might. Ante up your followers, and stake them against your foes' minions. You can call, raise, or fold, in similar fashion to high-stakes Poker games (and what stake is higher than your own worshipers' souls?)

Your spells are powered by a Constellation, which is laid down in the middle of the table as a Texas Hold'em Poker style flop, river, and turn. Just as in Hold 'em, some Constellation configurations provide you with great combinations for your secret hand of cards, some are disastrous, while most are middling to fair.

Using miracles, spells, and powerful artifacts, powered by the Constellation, send your followers into battles, build temples, and inflict terrible curses on the unfaithful. You face a tough decision in every hand: do you put your power on the line to help your believers, or do you turn your back to cut your losses, abandoning them to certain death? If neither you nor your opponents yield, the showdown takes place - hurricanes are opposed by deathly plagues, tempests extinguish walls of fire, and the ranks of the faithful shrink every second.

Use your god’s power to create miracles and activate myth cards for your heroes, temples, and godly artifacts. For example, the Norse pantheon has access to the Fenris wolf, Thor's hammer, and more. Babylon has Lilith, Ur, the tower of Babel, and more. Even the Lovecraft pantheons have myth cards and their own dark miracles. Place Wilbur Whateley in the forefront of your fight, or wield the Pallid Mask!