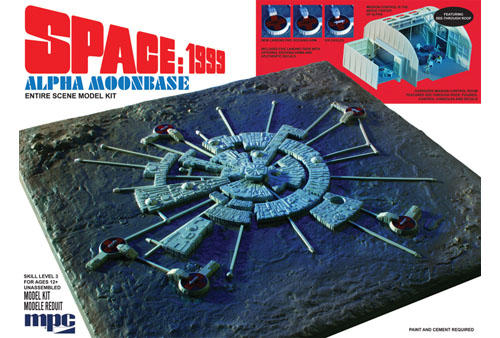 The design and production values of Space:1999 stand in high regard to sci-fi fans around the world. The 1970s TV show created by sci-fi pioneer, Gerry Anderson, left an indelible impression like few others. The main stage for all of the action in the show was Moonbase Alpha. The base housed the crew on their voyage through the depths of space and it is coming back in model kit form. The kit is comprised of two elements, a 1:1800 scale model of the entire base and a larger 1:115 scale of the base?s control room. This updated release contains significant changes to make the model more accurate. Five all-new landing pads are included (previous releases had only 3) along with other pieces needed to accurately portray the layout of the structure. A four-piece vacuform base supplies the entire sprawl of the moon base surface. New in-scale Eagle Transporters are also included.