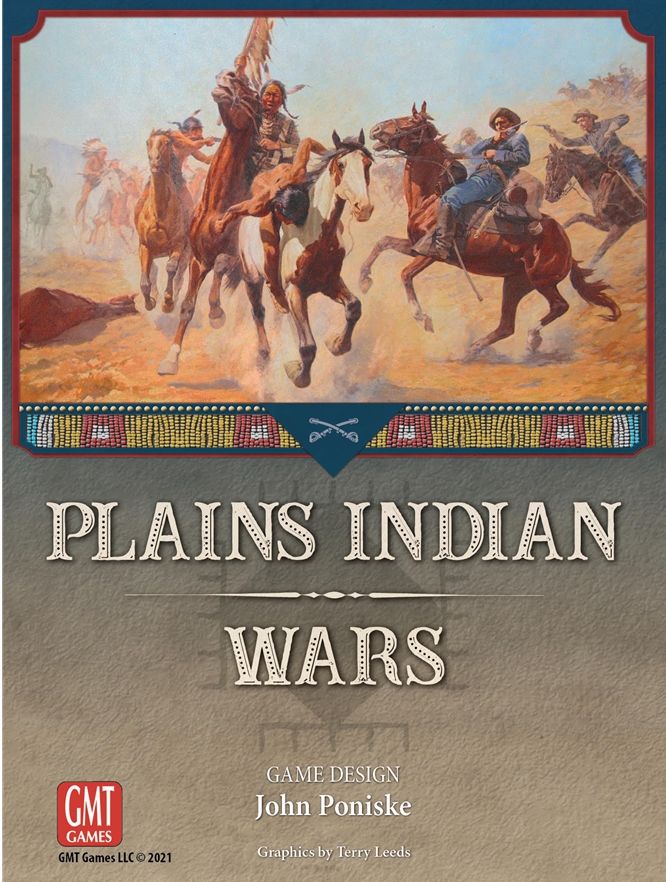 The Great Plains in the latter half of the 19th century was a cultural battleground. The Native way of life was under siege by an avalanche of invaders seeking land and progress. Plains Indian Wars reduces this monumental and catastrophic series of conflicts to its basic elements: A settler surge via long snaking wagon trains, the building of the Transcontinental Railroad, east and west, and the cavalry sent to protect them all. At the same time, Plains Indian Wars seeks to offer the Native-American player the opportunity to unite earlier, hold their own and perhaps even prevent European-American success.

Plains Indian Wars can be played by 1-4 players. It is a card-driven, cube game that uses area movement and control. Game play averages 60-90 minutes.

The Plains Indian Wars Map board centers on the Great American Plains between the Mississippi River in the east and the Rockies in the west, the Canadian border in the north and Mexican border in the south. The Northern and Southern Enemies are each defending 5 purple regions, The NPT and SPT are defending 12 regions each. Separating the NPT and SPT is the planned route for the Transcontinental Railroad. US Completion (linking the two lines) ends the game and earns the US player a bonus. The Indian player earns a bonus if this is prevented.

North and south of the rail line are historic wagon train routes. The US player earns points for each wagon cube that completes its journey. The Indian player earns points for preventing this. All factions may retreat into or enter from Mexico, Canada, the Rockies or the Mississippi, although those cubes retreating into the Rockies go directly to Sacramento and must exit from there and those retreating into the Mississippi go directly to St. Louis and must also exit from there. Also, US movement west out of the Rockies is dependent on successfully building a rail line through the Rockies – not a simple task!

On opposite sides of the Map board are found: faction deck boxes, faction cube reserve boxes, a casualty box, a victory point schedule and a victory point track. Both sides earn VPs during the game. The US player earns them for getting Wagon cubes into the Rockies. The Indian player earns them for capturing Wagon cubes. Most VPs are earned at the end of the game: One point per side for each region controlled and a bonus for either completing or preventing the completion of the railroad.

Faction turn order is random. Faction discs are drawn, one at a time from the draw bag and placed on the map in the order they are drawn. This is key, as players never know when workers will be completing a section of track or when wagon will escape (or enter into) a trap, but they will know what factions they no longer have to worry about that turn.

Each major faction holds a hand of three cards. The 60 cards included represent a selection of leaders and events connected with the Plains Wars. There are two types of cards: War Party/Engagement/Migration cards tell players how many cubes may be drawn from the reserve box and placed in respective home areas and how far the cubes may move.  Text cards allow for special circumstances and may act as reaction or endurance cards. There is only one play immediately card reflecting George Armstrong Custer’s hubris - its play could be positive for the Cavalry player but more often than not ends in disaster.

Combat? Combat is harsh and frequent. When opposing factions occupy the same region, players start rolling their faction’s personalized dice. Each weapon symbol rolled is a hit which removes a cube. Each blank result is a miss which allows a cube of that faction   the opportunity to retreat from battle. Settlers have little firepower but a near endless number of cubes. The NPT and SPT enjoy better firepower increased further when they join forces. Cavalry enjoys the best firepower but has the fewest cubes in the game. When both sides roll a treaty symbol, the stronger force relocates the weaker force. If both sides have an equal force, the battle continues.