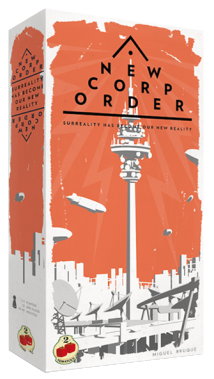 Surreality has became our new reality.

With the influence of the guilty governments fading away, MegaCorps are starting to control the world. But they have to be cautious: in this brave new world of hyper connected citizens, wary of the mistakes of the past, Media Conglomerates hold the key to planetary domination.

As the top executive of one of the world's leading MegaCorps, your task is to improve the public image of your company through the wise manipulation of the 4 biggest Media Conglomerates. Infiltrate their structures and use that influence to your advantage, even if that means playing one conglomerate against the other. After all, the prize is big: The World.

New Corp Order is a game of infiltration, manipulation and world domination for 1 to 4 MegaCorp executives of 12+ years old and around 30 minutes of duration.

There are cards that can be used in this game as well as in Peak Oil. In addition, Peak Oil's barrels may be used in New Corp.