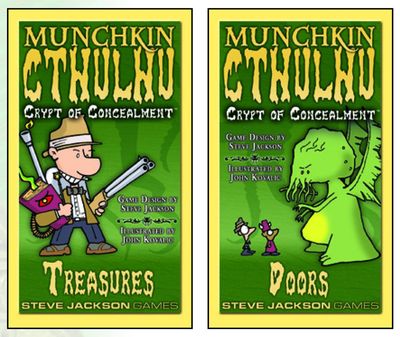 Munchkin Boxes of Holding  (aka Crypts of Concealment)  are designed to hold cards from any of the many  Munchkin  games as those cards are a non-standard size. Each box can hold 500 cards, with one box for Door cards and one box for Treasure cards. Three themed versions of the  Boxes of Holding  exist one based on basic  Munchkin, another based on  Munchkin Cthulhu, and a third based on  Munchkin Zombies; each version is packaged with two unique cards for the corresponding  Munchkinset.