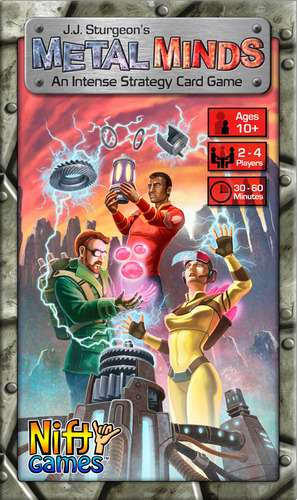 Metal Minds is a science fiction card game of hand and resource management where you play as a psychic agent indentured to the government of a colonial planet. Using your gifts, you can construct intricate machines and create powerful energy spheres called rift orbs to power cities.

A squad of agents is dispatched to a remote mountain range, rich in resources, to harvest rift orbs. While there, your team discovers some mysterious abandoned factories. The government promises release from servitude to whoever can be the first to unlock the factory secrets. As a result, a fierce competition ensues.

Players take turns playing cards and using agent and device powers in a race to get rift orbs. You play cards and use certain powers by spending resources. Cards can have a variety of effects, including drawing cards, converting resources, creating rift orbs and attacking rivals. At the end of a round, a player with 8 or more rift orbs wins the game.