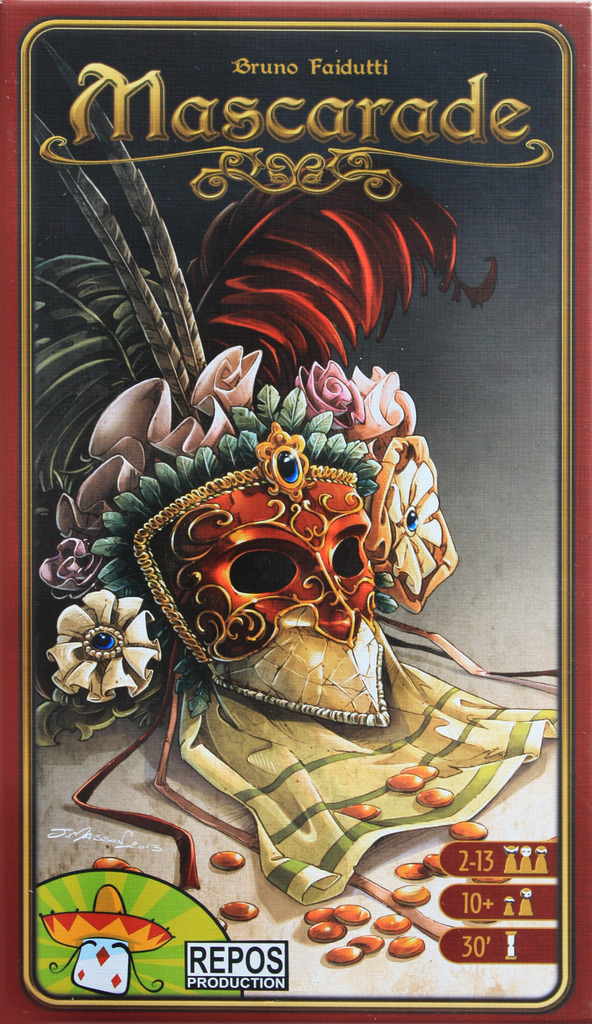 Players in Mascarade start with six coins and a randomly dealt character card. Characters stay face up just long enough for players to more or less memorize them, then are turned face down. Your goal is to be the first player to hold 13 coins, and while you start nearly halfway to that goal, you can go down just as surely as you can go up!

On a turn you take one of three actions:

1) Announce your character: Claim the power of a certain character and take the associated action. You don't have to have that character card in front of you to take this action, but if someone else says that they're that character and reveals the card to prove it, that player takes the action instead while you lose one coin to the tribunal.

2) Swap cards or not: Take another player's character card along with yours, place them under the table, shuffle them around a bit, then give one card back to the other player while keeping one for yourself. You (presumably) know whether you changed characters and can have some idea of who you are now, but that other player might be in the dark.

Play continues until one player obtains 13 coins and wins!

Mascarade includes more character cards than the number of players, so not all characters will be used in each game. The rules suggest that you use certain characters in your first games, but once you know the game, you can try many other distributions. The first edition of Mascarade contains 13 characters. The beggar (woman) has no special ability. Bruno Faidutti says on his blog: "...she has no ability so far. I always like to find blank cards in a game, for which I can imagine my own effects. Here, the card is not blank – it has a picture and a name, but you can devise its effect, and I'm sure there'll be some prize for the best idea."