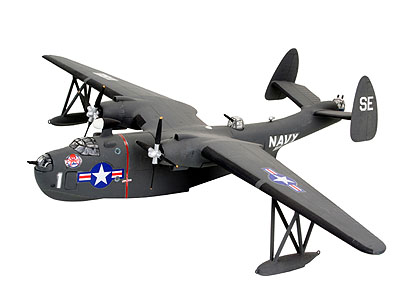 The Martin PBM Mariner was an American patrol bomber flying boat of World War II and the early Cold War era. It was designed to complement the Consolidated PBY Catalina and PB2Y Coronado in service. A total of 1,366 were built, with the first example flying on 18 February 1939 and the type entering service in September 1940.

The first PBM-1s entered service with Patrol Squadron Fifty-Five (VP-55) of the United States Navy on 1 September 1940. Prior to the USA's entry into World War II, PBMs were used (together with PBYs) to carry out Neutrality Patrols in the Atlantic, including operations from Iceland. Following Japan's attack on Pearl Harbor, PBMs were used on anti-submarine patrols, sinking their first German U-boat, U-158, on 30 June 1942. PBMs were responsible, wholly or in part, for sinking a total of ten U-boats during World War II. PBMs were also heavily used in the Pacific War, operating from bases at Saipan, Okinawa, Iwo Jima, and the South West Pacific.

This model kit requires assembley. Glue and paint not included.