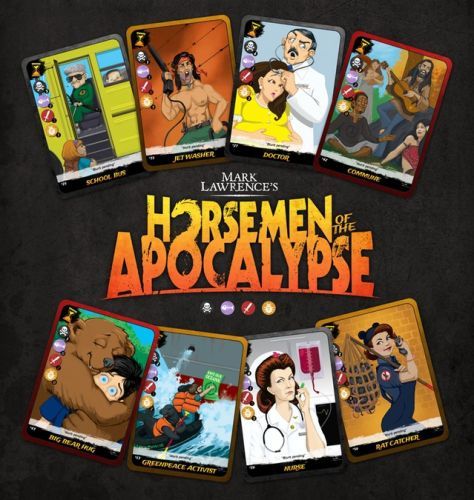 Mark Lawrence's Horsemen of the Apocalypse

A chance to combine your interest in destroying the world, card games, and riding down innocents in order to doom your friends.

EVERYONE WHO PLAYS HORSEMEN OF THE APOCALYPSE DIES. Sorry.

The object is pretty straightforward. Be the last survivor...and ensure your (so-called) 'friends' are ridden down first. How? You do this by throwing innocents under the hooves of the Four Horsemen of the Apocalypse in order to slow them down.

Decks of cards contain the Horsemen: Death, Famine, War and Pestilence, and their Horses. They have arrived on Earth at the End of Days hell-bent on bringing doom and gloom to the world. Everything else in the game is designed to help you survive. For a time, at least.

Delay Cards are many and varied. They comprise the bulk of the game and include such things as hippies, a school bus, a beached whale, your grandmother, nurses, farmers, a basket of puppies...basically anything you can throw in front of the Horsemen to stop them from reaching you.

There are also Effect Cards, which include actions such as Swap, Shield, Force, and more. These cards allow a player to steal another player's defenders, or to turn a Horseman back against the previous player, or to force a player to put down any Horseman/Horse card in their hand.

According to the game's designer, Mark Lawrence, "the game is all about recklessly laying down innocent lives to eke out your own miserable survival, but to win you have to do it effectively. Each Horseman of the Apocalypse is unique. It’s going to take something very different to slow down Pestilence than to slow down Famine. If Death and War are both riding your way, throw the Diplomat under War’s hooves and the Doctor under Death’s, not the other way around."