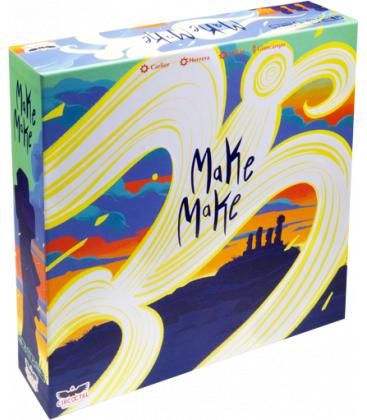 In the strategy game Make Make, each person represents the chief of one of the clans that inhabit Rapa Nui. Each clan seeks control of the island's territories, which will allow them to perform the ceremonial rites dedicated to the god Make Make, who will then make the chief of the clan the new Ariki of the island that will govern and give prosperity to the Rapanui people.

Each player starts the game with one chief token, five Tangata Manu tokens, and eleven dominance tokens. Twelve Moai tokens are placed to the side, and the Make Make figure is placed in the center of the game board, which has a trapezoidal-shaped hex grid on it, with the intersection of any three hexes (called "territories") being marked as a ceremonial ground. The six territories surrounding Make Make are "sacred territories".

During the ceremonial phase, if you control a territory and control all of its surrounding territories and have your chief token and at least Tangata Manu on these territories, then you return tokens on this surrounded territory to your reserve and place a Moai on this territory instead. A territory with a Moai on it is considered to be controlled by all clans, and a Moai cannot be removed from the game board.

If you have all five of your Tangata Manu tokens on the board and you have the Make Make token in front of you, you win instantly.