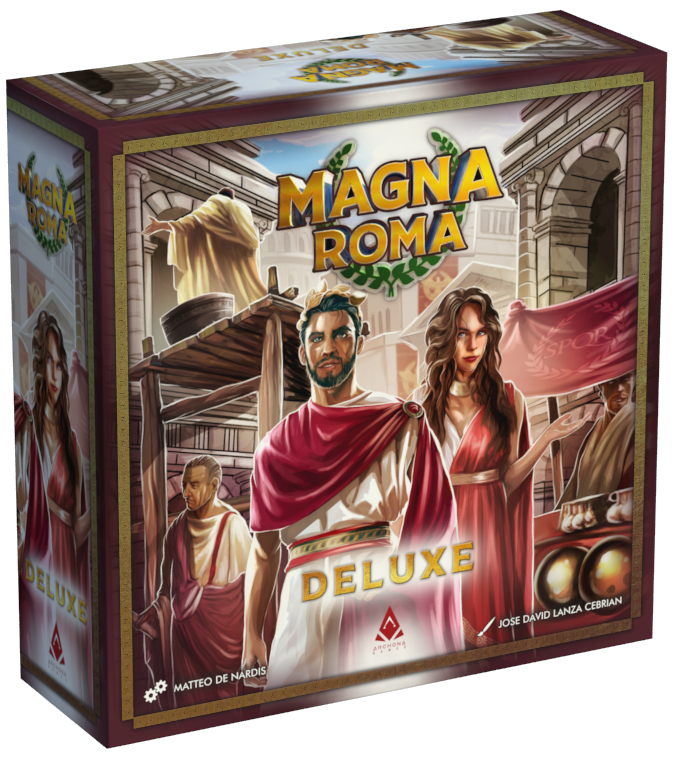 This deluxe version of Magna Roma includes everything from the standard version while featuring an additional 12 beautiful Monument miniatures for enhanced game experience!

You are summoned by the Roman emperor to hear about his great plans for expansion. He wants you to found the next great Roman city and bring glory to the Roman Empire!

Carefully plan your city and efficiently connect neighborhoods to gain valuable resources! Spend coins and employ population to build magnificent monuments! Use legions to conquer distant lands for the Emperor! Produce valuable luxuries to use for scoring points! Gain the Will of the Gods and use it to empower your city! Glory is within your grasp!

Build the greatest Roman cities and bring glory to Rome in this tile-placement, city builder board game for 1-4 players!

In Magna Roma, the objective is to make the most points at the end of the game by building your city efficiently! To do so, players take turns to place city tiles in their city. A newly placed tile must be connected to at least one of the previously placed tiles. When a player places a tile, the connection with the adjacent tiles will result in producing one or more resources for the player. For example, connecting two half-circles found on the tiles produces a coin, a rectangle and triangle produce population, a rectangle and half-circle produce a legion etc. What's more, if the connected shapes are of the same color, the game rewards the player with double the resources.

With these resources, players will be able to play the other actions in the game, such as: build different monuments in your city, gain a Luxury Good, gain the Gods' Favor tiles, conquer new provinces for the Emperor all serving the same goal - to gain the most points at the end of the game and build the greatest Roman city that ever existed!