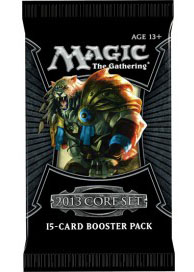 An advanced level core set, 2013 Magic is largely built around Nicol Bolas, Planeswalker , which became the first multicolored card to be included in a core set. The packaging of the set is centered around Bolas' iconic feature, his warped horns. The set includes a cycle of Legendary creatures (only the second time a core set included Legendary creatures, the first being Tenth Edition) and a cycle of Planeswalkers. Ajani Goldmane and Liliana Vess received new cards. Collect ALL of the Mythic Rare Planeswalkers: Ajani, Caller of the Pride; Jace, Memory Adept; Liliana of the Dark Realms; Chandra, the Firebrand; Garruk, Primal Hunter and Nicol Bolas, Planeswalker. Magic 2013 is the first core set with the mechanics exalted, flash and the first core set to have a spell that specifically destroys an equipment - Turn to Slag . An exciting set that brings dual lands from M10 into standard play for another year.