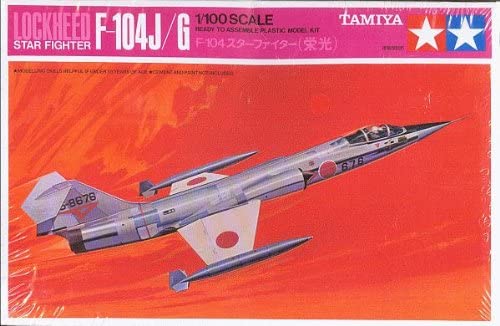 The Lockheed F-104 Starfighter is a single-engine, supersonic interceptor aircraft which was extensively deployed as a fighter-bomber during the Cold War. Created as a day fighter by Lockheed as one of the Century Series of fighter aircraft for the United States Air Force (USAF), it was developed into an all-weather multirole aircraft in the early 1960s and produced by several other nations, seeing widespread service outside the United States.

After a series of interviews with Korean War fighter pilots in 1951 Kelly Johnson, then lead designer at Lockheed, opted to reverse the trend of ever-larger and more complex fighters and produce a simple, lightweight aircraft with maximum altitude and climb performance. On 4 March 1954, the Lockheed XF-104 took to the skies for the first time, and on 26 February 1958 the production fighter was activated by the USAF. Only a few months later it was pressed into action during the Second Taiwan Strait Crisis, when it was deployed as a deterrent to Chinese MiG-15s and MiG-17s. Problems with the General Electric J79 engine and a preference for fighters with longer ranges and heavier payloads meant its service with the USAF was short-lived, though it was reactivated for service during the Berlin Crisis of 1961 and the Vietnam War, when it flew over 5,000 combat sorties.