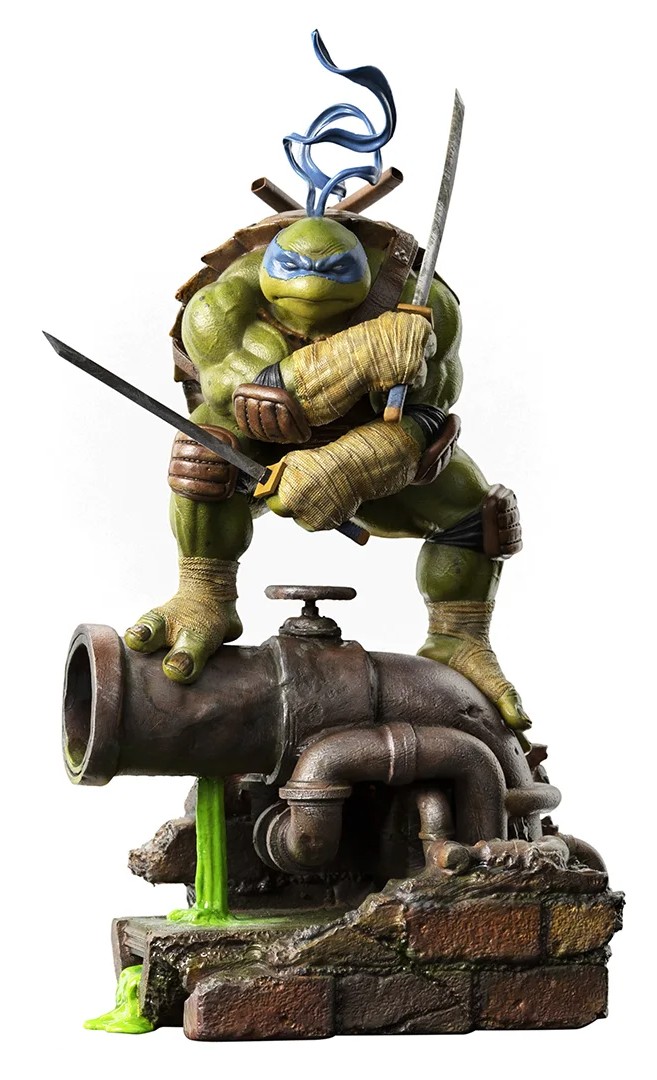 Stealthily moving on a pipe network in New York’s sewers, Leonardo sneaks in wielding his long and sharp Ninjatō swords. By his feet, a broken large pipe leaks a viscous green substance, characteristic of the formula responsible for his and his brothers’ creation, that in wrong hands, could create other dangerous mutations. Bold and reliant, nicknamed Leo, Iron Studios present his statue “Leonardo BDS – TMNT – Art Scale 1/10”, portrayed using a blue mask, he is the eldest among his brothers, tactical advisor, and the group’s field leader, he’s always disciplined and mature and has a very strong connection with his father and mentor Splinter that baptized him inspired by artist and scientist Leonardo da Vinci.

Hidden from society, jumping from the skyscraper’s roofs, or sneaking in New York’s sewer galleries, four young brothers wage a tireless fight against evil in all of its forms, defending the city from the threat of small criminals, facing an ancestral ninja clan corrupted by crime, and even stopping alien invasions, always concealed from the public knowledge. Created in the comics by Kevin Eastman and Peter Laird, Teenage Mutant Ninja Turtles (TMNT), became a huge success in the 1980s, expanding into a multimedia franchise, conquering a legion of fans in the entire world. Formed by four young mutant turtles with human-like features, genetically altered by a viscous substance called Mutagen or Ooze, the brothers, members of the group, got their father figure and Sensei master in the shape of an anthropomorphic rat named Splinter, that baptized them with the name of Italian Renaissance artists. Acting in New York City, their home and base of operations is on the network of sewers where they remain hidden during the day, and only get out for their missions at night. Their greatest arch-enemy is Shredder, the leader of the criminal ninja group known as Foot Clan.

Forming a diorama set of the group in combat in the sewers of New York, their most common territory, the first line of TMNT Art Scale 1/10 statues by Iron Studios is already available for Pre-Order, revealed first on the show Inside Iron Studios Day on YouTube, where fans and collectors certainly cheered for this release by screaming “Cowabunga!”. Check out also the line “TMNT BDS – Comics Exclusive Version – Art Scale 1/10” with the four chelonian brothers characterized as their version from the comics, and the stylized Toy Art collection “TMNT – MiniCo” by Iron Studios. Soon more news from the TMNT universe by Iron Studios.