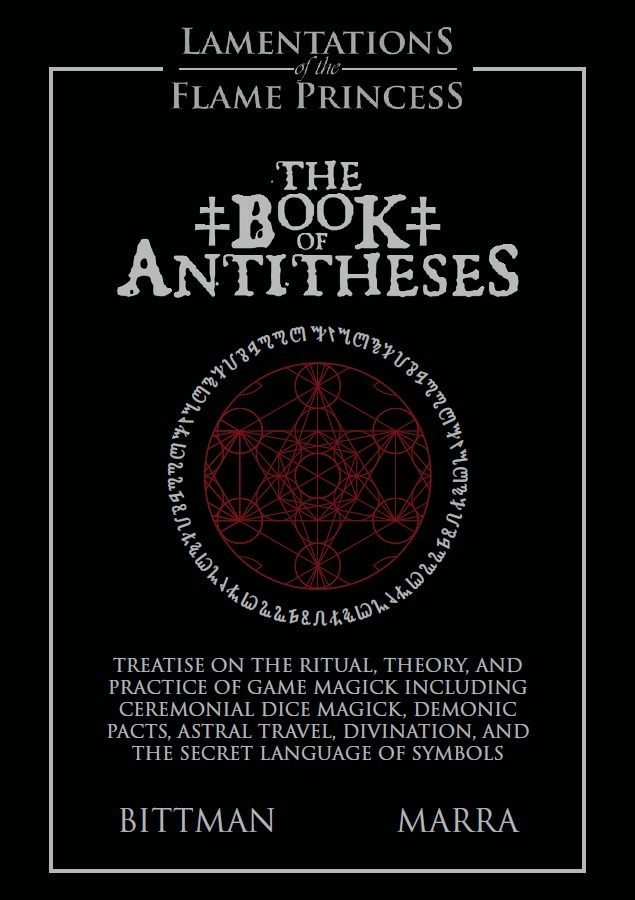 Lamentations: The Book of Antitheses

The time has come to reveal the truth behind role-playing games, their Satanic origin, and how to utilize that truth to manifest true power in the Physical Plane. THE BOOK OF ANTITHESES contains everything you need to initiate yourself into the left-hand path of role-playing. Learn the secrets of astral travel, telegraphy, divination, ceremonial dice magick, and the binding of demons. Succumb to the knowledge that demons live in us, all around us, and can be yoked like oxen to deliver WEALTH, SEX, and POWER. The second half of the book contains a full Lamentations of the Flame Princess adventure built using the magickal principals herein. We have forged the only team with the spiritual attainment and unadulterated will to unfetter your mind and unleash your potential: Written by Jobe Bittman, author of THE ONE WHO WATCHES FROM BELOW, TOWERS TWO, and THE MONSTER ALPHABET. In this book, Bittman taps his experience as a pataphysicist and master of the occult sciences to reveal the true magickal underpinnings of tabletop role-playing games. Illustrated by Benjamin Marra, the infamous and influential underground comic artist whose album cover for Wayfaring Strangers: Acid Nightmares garnered him a Grammy nomination. His comic books include NIGHT BUSINESS, AMERICAN BLOOD, and TERROR ASSAULTER: O.M.W.O.T. (One Man War On Terror). Foreword written by J.F. Martel, filmmaker and essayist on art, culture, religion, and philosophy. He also co-hosts the WEIRD STUDIES podcast, a series of conversations on the intersections of philosophy, the arts, and the weird. Martel is the author of RECLAIMING ART IN THE AGE OF ARTIFICE and REALITY IS ANALOG: PHILOSOPHIZING WITH STRANGER THINGS. Join us and attain ROCK-HARD OCCULT POWER now!