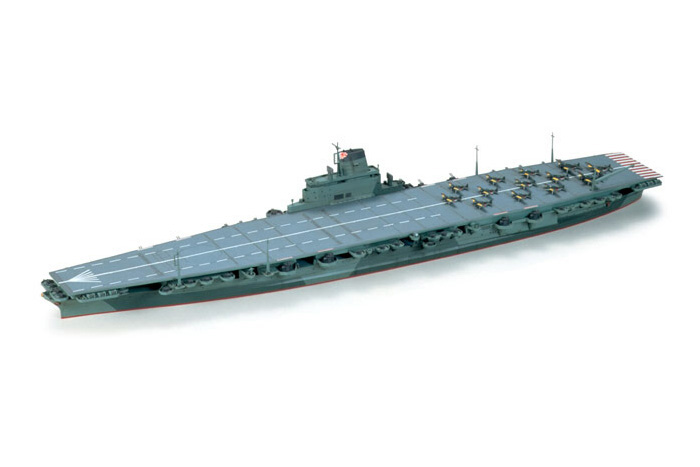 One of the largest carriers of WWII, Shinano was originally planned to be the third installment of Yamato class battleships. The construction of this monstrous vessel was started soon after the Japanese defeat at Midway and was completed on Nov. 19, 1944. Its overall length stretched to 266m and it displaced 62,000t. It was well protected with heavily armored sides, inherited from Yamato, and a reinforced flight deck able to withstand the direct blast of a 500kg bomb. On its way to be fitted out however, it was spotted and torpedoed by an American submarine, later capsizing off the shores of Shionomisaki.

This is the 1/700 assembly model kit of Shinano, the massive carrier, which was sunk only ten days after being put into commission.  The unique hull design of Yamato and Musashi was passed down to Shinano, and has been accurately molded. The hangar under the flight deck has also been recreated, and can be equipped with aircraft.  Both the front and rear aircraft elevators can be modeled in the raised or lowered position.  The bridge, sloping funnel, and steam pipes have also been modeled with the utmost attention to detail.  Kit also features accurate molding of rocket launchers, powerful anti-aircraft guns, and other powerful weapons of Shinano.  Kit includes 32 aircraft, including the Ryusei. Since aircraft are molded in clear plastic, leaving the cabin portion unpainted produces a realistic finish.