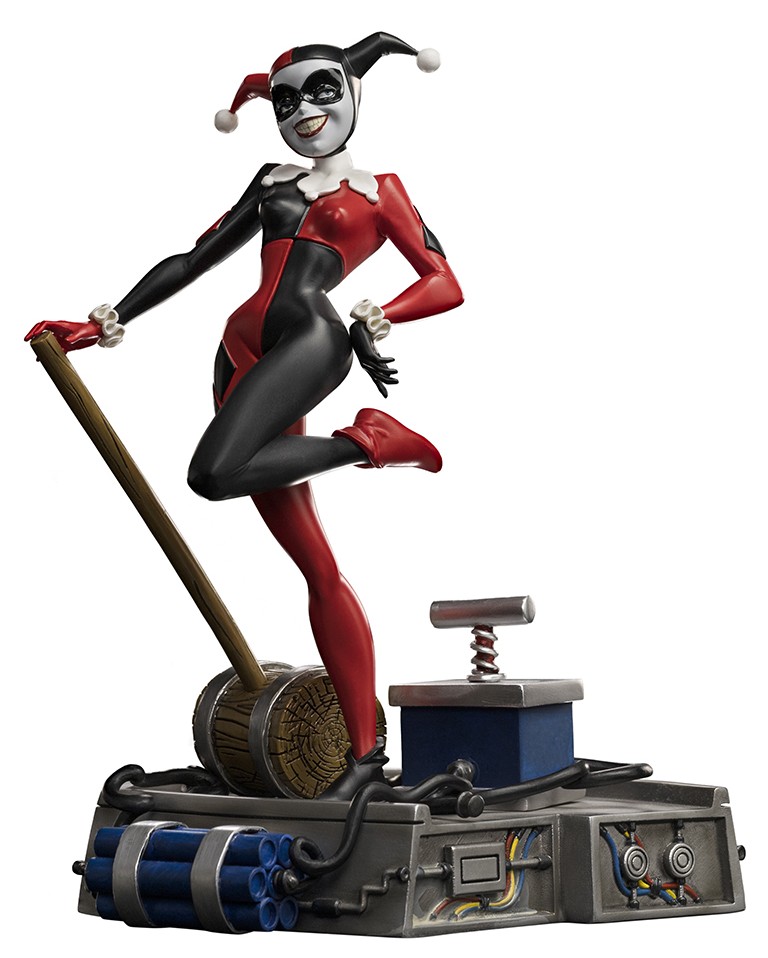 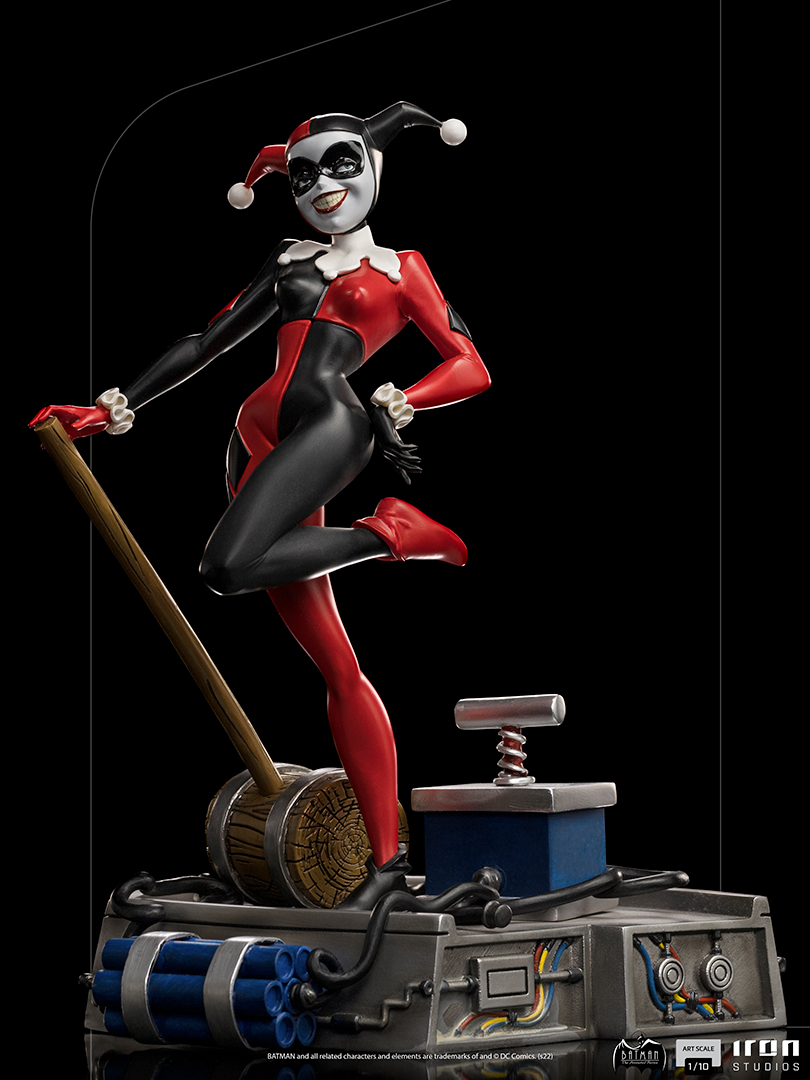 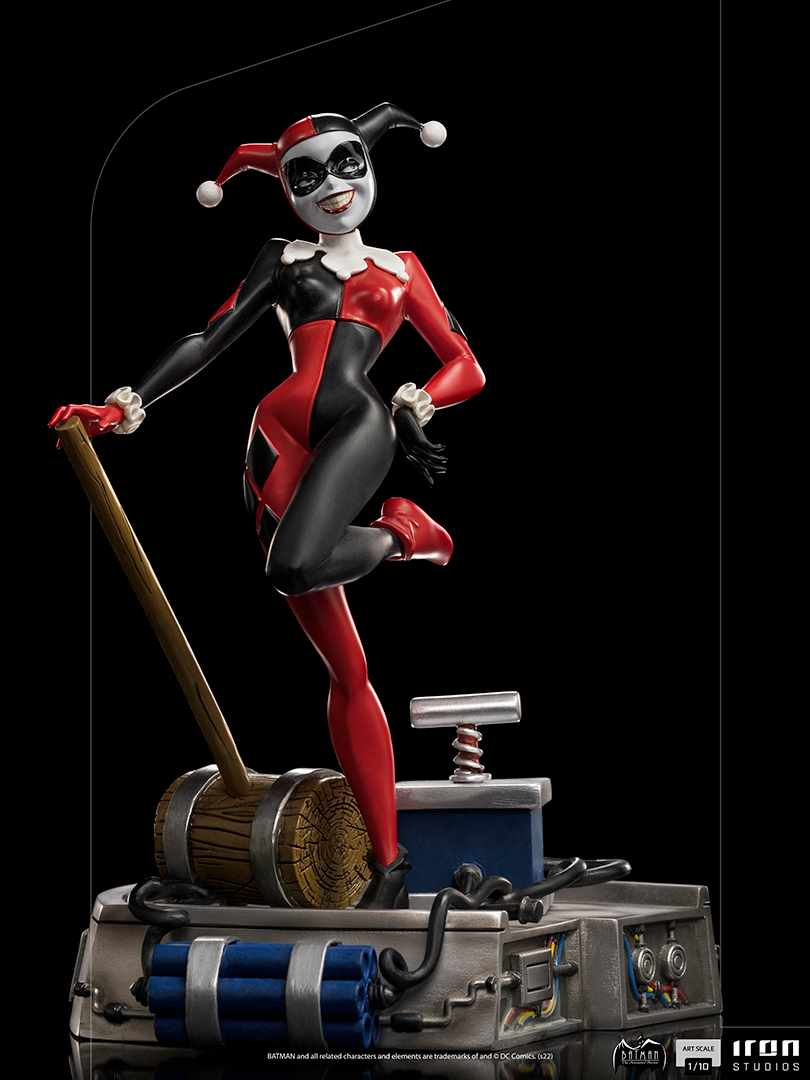 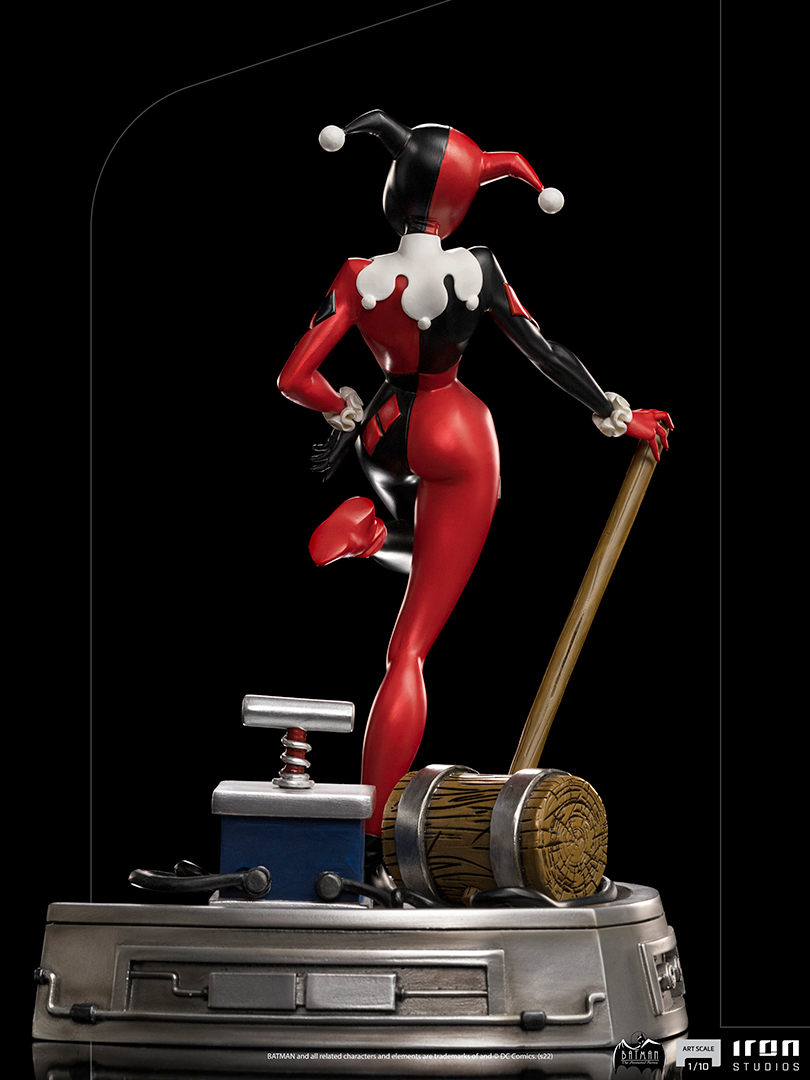 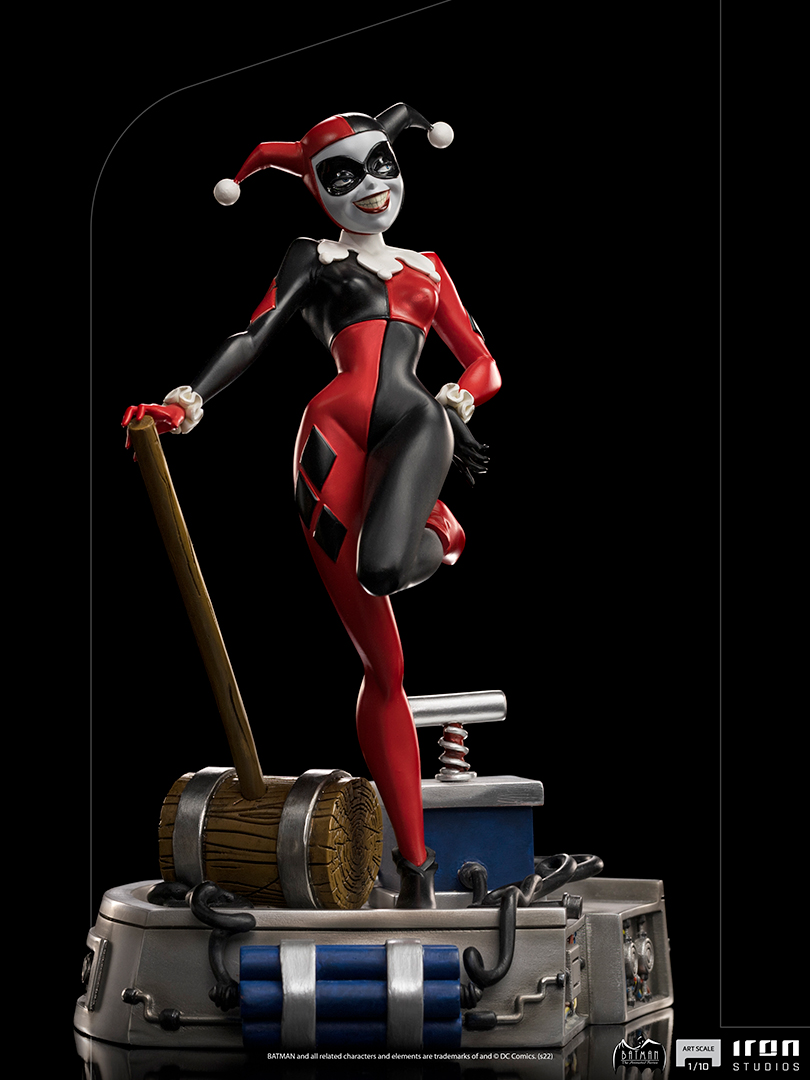 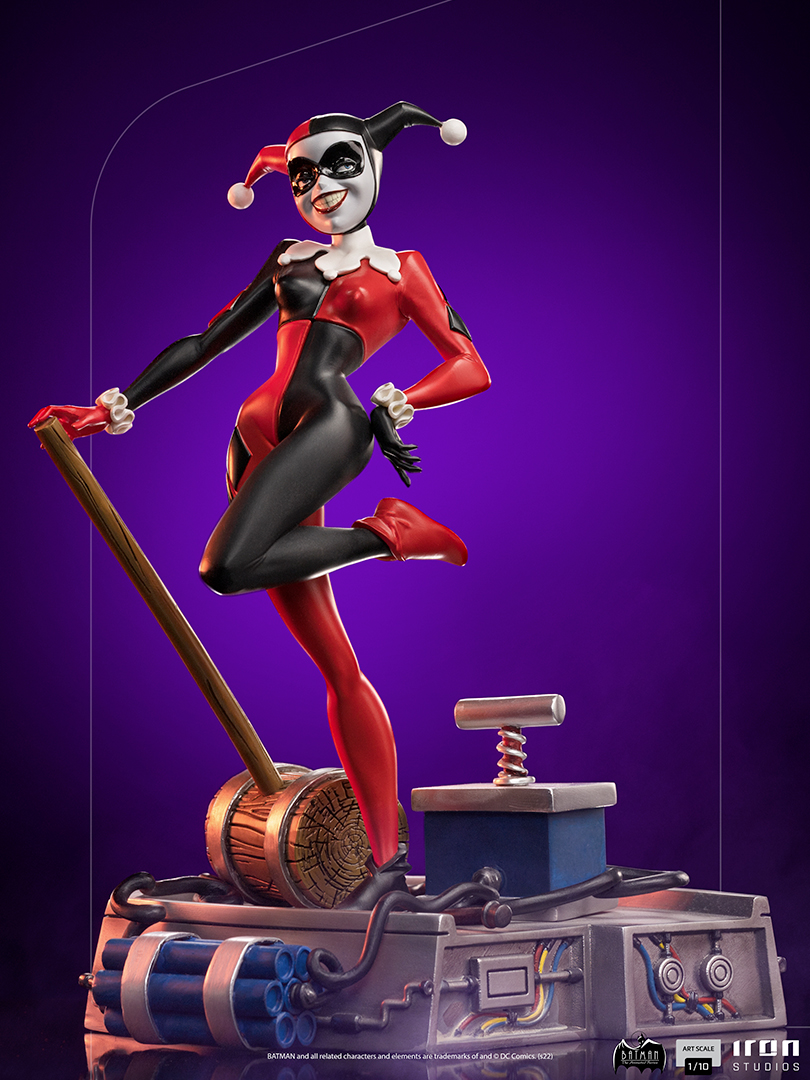 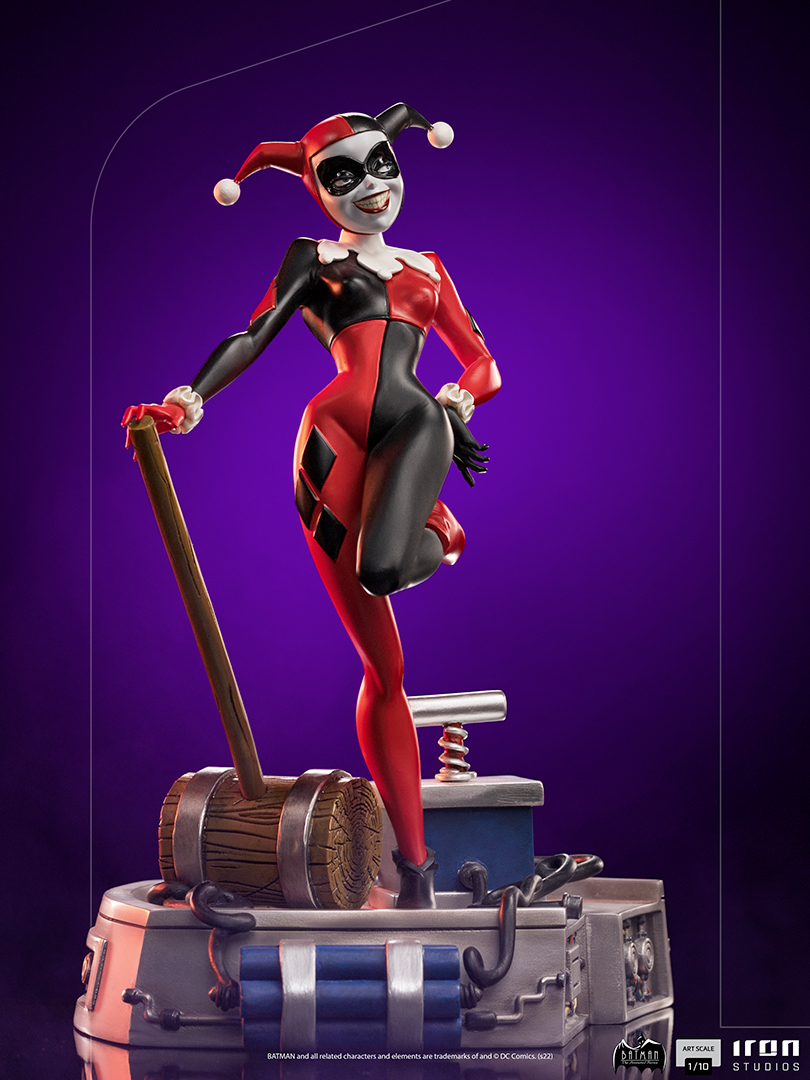 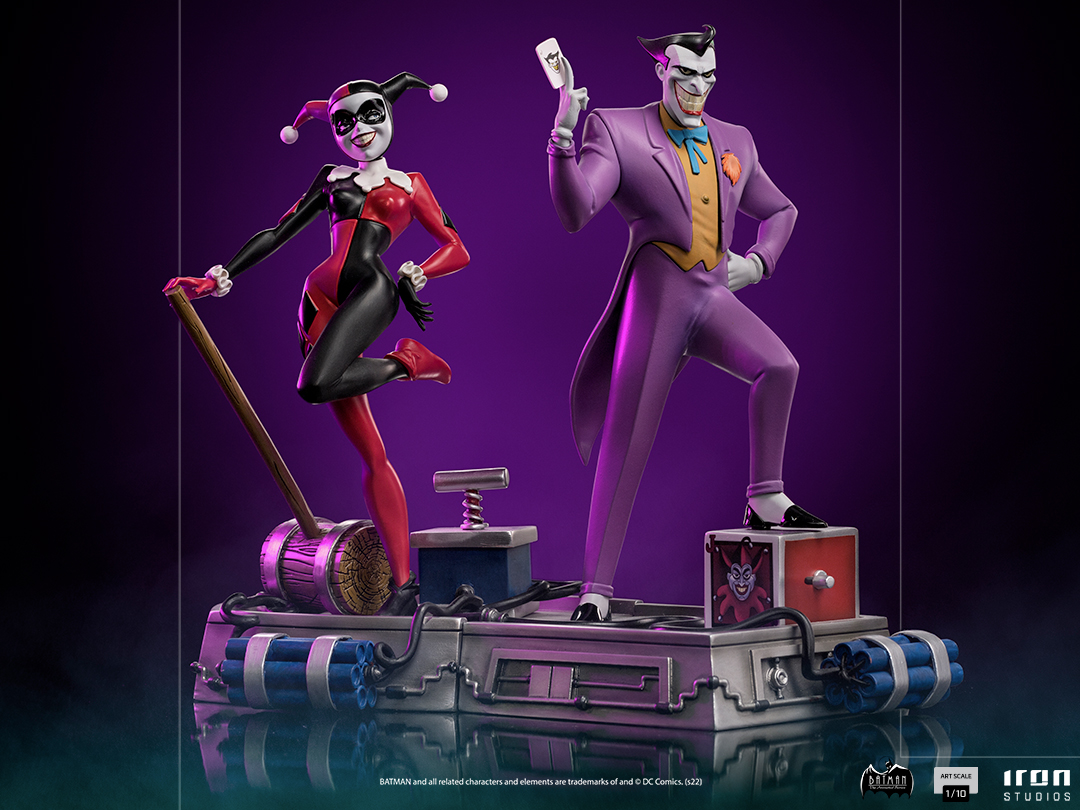 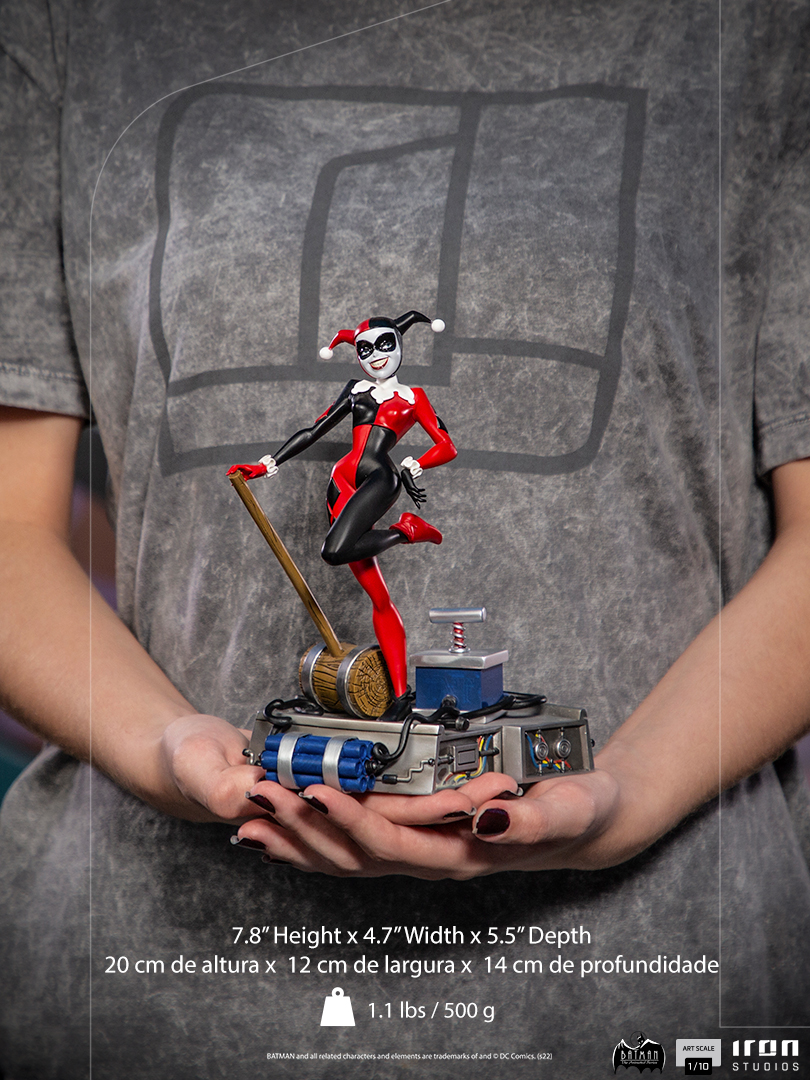 Leaning on her big wooden hammer, a weapon she uses with extreme ability despite its heavy appearance, Gotham’s Maid of Mischief poses on her right leg with the grace of a ballerina, thanks to her skills as an acrobat and gymnast. On a technological pedestal, with a Blasting Machine (an electric current portable explosive’s detonator) by her side, wearing her original black and red costume, patterned with diamonds just like in the deck’s suit, with the characteristics of a court buffoon of her boss and boyfriend, Iron Studios bring the statue “Harley Quinn – Batman The Animated Series – Art Scale 1/10” with the classic villain in her original conception by illustrator, animator, and writer Bruce Timm, celebrating the 30th anniversary of Dark Knight’s iconic animated series from 1992, that originated what is called today the DC Animated Universe.

Ex-psychiatrist and intern at Arkham Asylum sanatorium, Dr. Harleen Quinzel felt surprisingly attracted by the charm of her patient known as Joker. With his charismatic and extravagant behavior, the Clown Prince of Crime seduced and manipulated the young doctor, driving her insane and turning her into his girlfriend and criminal sidekick called Harley Quinn. With the agility and fighting skills above average, differently from Joker, she can also act like a sane and normal person, enough to disguise herself, and her charisma and psychiatric training allow her to psychologically manipulate others. Created by the duo Paul Dini and Bruce Timm, the positive reactions to the character from critics and audience made her presence constant in this animation and future Batman animations as well, up until 1999 when she was also added to the DC Comics universe.

Developed by Bruce Timm and Paul Dini and produced by Warner Bros. Animation between 1992 and 1995, Batman: The Animated Series, where Harley Quinn was created, is widely praised for its noir aesthetics and thematic complexity. Its acclamation helped it win four Emmy awards, including Outstanding Animated Program, and it’s considered by many the best Dark Knight’s adaptations for other media. Now celebrating three decades of success, she’s also known thanks to Margot Robbie’s acting, that plays the character in the DC Extended Universe in the movies since Suicide Squad from 2016. Harley next to “Puddin” (an affectionate nickname she uses for Joker since the creation of the series) opens a new collection from Iron Studios. The pedestal of Harley Quinn and Joker’s statues connect, creating a diorama set with both statues surrounded by explosive tubes connected through cables, with the blasting machine detonator at Maid of Mischief’s side. Revealed in the Inside Iron Studios Day, check out more news from Batman’s animated universe by Iron Studios soon.