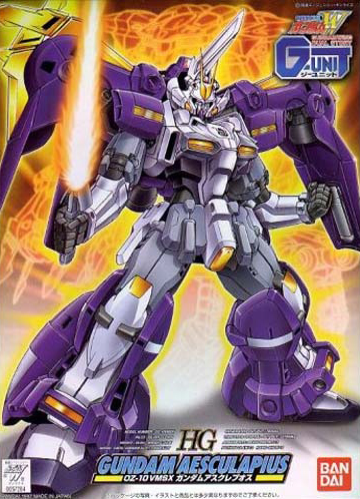 The OZ-10VMSX Gundam Aesculapius is the upgrade of the OZX-GU02A Gundam Geminass 02 appeared in the New Mobile Report Gundam Wing Dual Story: G-Unit manga and the Manga adaptation of ˆ Gundam series. It was piloted by MO-V's Odel Bernett and later by Corin Nander.

Technology & Combat Characteristics
Based off the Geminass 02 in its basic configuration, the Aesculapius was configured as a heavy assault mobile suit capable of transforming into its "Close Combat" mobile armor mode. The unit retains the innovative feature known as the PX System present in the original version, which takes advantage of the increased adrenaline a pilot feels during combat and also increases the performance of the mobile suit, but does have a time limit which, if exceeded, has serious consequences for both the pilot and the suit. However, the Aesculapius' armaments have been substantially changed. The new backpack allows for a close combat mode where the backpack is mounted onto the head and the python claws on the shoulders mount over the hands like a pair of gloves. Other armaments include four new rapid shots, as well as two beam swords.