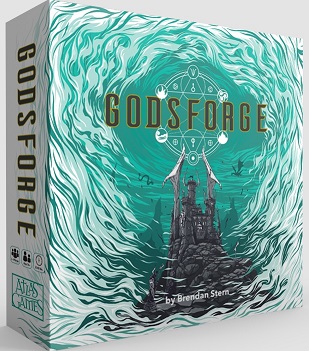 Godsforge is a fast-paced, card-and-dice, battle game published by Atlas Games. Players are spellcasters who battle to control the dwindling Etherium, a primal resource, which can now only be found at a single location dubbed the Godsforge. Dice combinations are used to solve mini puzzles and earn materials used to build an army of ancient monsters and cast spells to defeat enemies. The game lasts around 30 mins and caters for 2-4 players, aged 14+

Godsforge features simultaneous play where players attack the player to the left and defend against attacks from the player on the right. Each turn, all players simultaneously rolls 4 dice up to 3 times, Yahtzee style. Then each player selects one of the 4 cards in their hand to play facedown. Players reveal those cards, in turn order, paying the cost to activate them using specific numbers on the rolled dice, or the sum of rolled dice, or veilstones (obtained by rolling a 6), or a combination of those options. Cards are one-shot effect spells and creatures which can attack, defend, or be sacrificed for special abilities. Once all cards are resolved, damage is assessed between players and any unwanted cards are discarded and new ones are drawn to refill a player's hand to 4 cards. Eliminated spellslingers damage all players each round to speed up the endgame.

The game is designed by Brendan Stern with art by Diego L. Rodriguez.