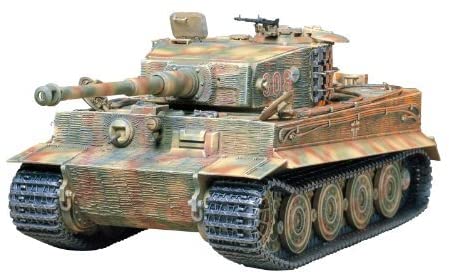 During WWII, the German Tiger I was greatly feared by Allied forces for its thick armor and powerful 88mm gun. This is a 1/35 scale plastic assembly kit model of the German Tiger I late production variant which was put in production from January 1944 and appeared on the Normandy front. Features of the late production variant of the Tiger I, including the distinctive silhouette, the powerful 88mm gun, periscope on commander's cupola, and pressed steel wheels, have all been realistically reproduced. In addition, shell loading area in the turret as well as hatch undersides have detailed finish. Kit includes two types of gun barrels and gun mantlets to enable to build the last production variant model. Furthermore, one commander figure also included.