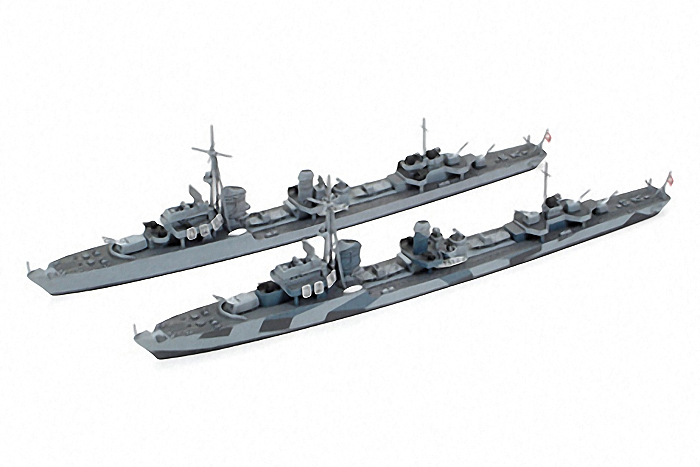 The German Z Class Destroyer, which served in actions off Narvik, Norway, and as escort to the Battle cruiser Scharnhorst prior to her final sortie, is available as a 1/700 Waterline Series model. This set includes parts to build 2 destroyers, and allows depiction of either early version or late-war Project Barbara configuration.

About the German Destroyer Z Class

The Z class destroyer was constructed during Germanys rearmament prior to WWII. The comparatively large hull and high temperature/high pressure boilers combined with efficient German workmanship for an imposing and effective ship. A large number of destroyers, designated Z1 to Z43, were deployed between 1935 and 1944. The early types (Z1-22) were relatively lightly armed with five 12.7cm guns, while the 1936A Type (Z23-30) and 1936A Mobilization Type (Z31-34, Z37-39) featured heavier 15cm guns. As air power began to play a dominant role in naval warfare, plans were drawn up in 1944 under code-name Barbara to add air-defenses to the Z class destroyers. This was to comprise fourteen 37mm (6 coaxial, 2 single) and ten 20mm (3 coaxial, 1 quad) cannon as well as six 8.6cm RAG rocket launchers, with some variations between individual ships.