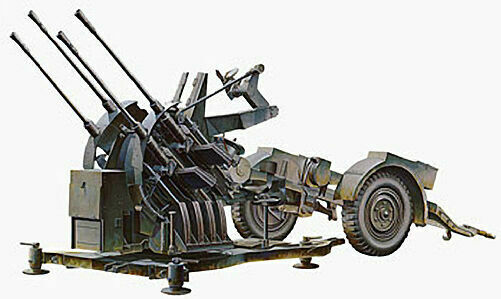 Shooting an impressive 600 rounds per minute and greatly feared by Allied pilots was the German 20mm Flakvierling 38 MITSd.Ah.52 which is now represented as a plastic assembly model kit. Although its purpose was to provide aerial defense against Allied aircraft attack from a grounded position, it was also seen used with trucks and other land vehicles as well on warships. Features of the model including the skyward aimed gun barrels, ammunition cartridges, operating handles, pedals etc. have all been realistically reproduced. The gun barrels along with its gun sight can move up-down and left-right. Also included with the set is a trailer to allow you the choice of assembling the Flakviering 38 in either transit or shooting states.
Specifications are subject to change without notice.