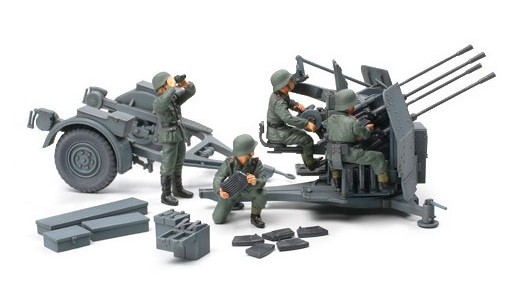 Originally developed as a light anti-aircraft weapon for the Kriegs marine, the German army also adopted the 20mm cannon for use on land and was widely-used throughout WWII. To compensate for the cannonï¿½s low rate of fire, 4 of these cannons were mounted together to create the Flakvierling 38. The mount featured collapsible seats, ammo cartridge racks, a three-legged base, and could be rotated via hand wheels, with the guns themselves fired via two foot pedals,each of which controlled a pair of diametrically opposed cannons. In basic form, the Flakvierling38 was loaded onto a 2-wheeled mount for towing to deployment points, but it was also fitted onto halftracks, tank chassis, ships, barges, and trains to provide close-range air defense against Allied fighter-bombers.

High-quality 1/48 scale assembly model kit of the German Flakvierling 38 anti-aircraft gun.
Quad-20mm cannons are linked to gunsight. Guns can be freely elevated/depressed and gun pedestal can be rotated to enable various firing positions.
Parts are included for the trailer, enabling the gun to be towed by 1/48 scale vehicles such as ITEM 32534 6X4 Krupp Protze (Kfz.70).
4 figures in realistic poses as well as detailed accessories such as ammunition boxes and magazines are included as well.
Excellent as a stand-alone diorama piece or as a component in larger displays