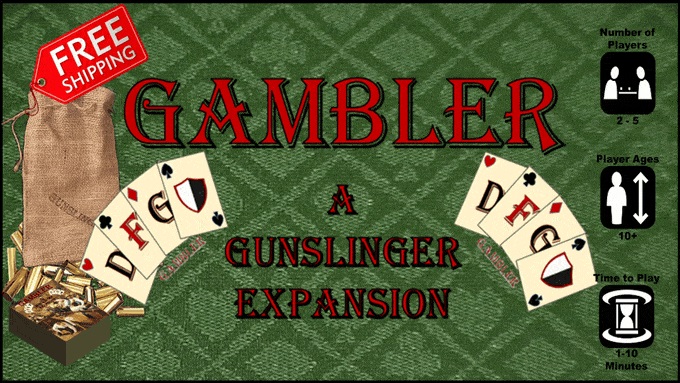 In the new expansion Gambler someone has cheated! The table has been flipped and catawampous fisticuffs are immanent! Grab a beer bottle, chair or whatever you can use to cash in that sidewinder. Cheat’n ain’t never won nothin’ so obviously the cheater is the Gambler on the ground!  The original Gunslinger is a fast paced spaghetti western card game where one minute you are standing tall and the next you are taking a dirt nap. This game can be learned and played in less than eight minutes. Once you play a few rounds you will be a Pro, or Addicted, or Both! I’d bet my britches on it. Both Gunslinger and Gambler are stand alone card games. Players can choose to mix the games or combine multiple copies of the same game for additional players. Each game is designed to be played with up to five players. Depending on the number of players and their experience level, games are completed less than ten minutes. Each game is a unique western themed gunfight or saloon brawl complete with epic rivalries, explosions, big bets, and friendships lost.