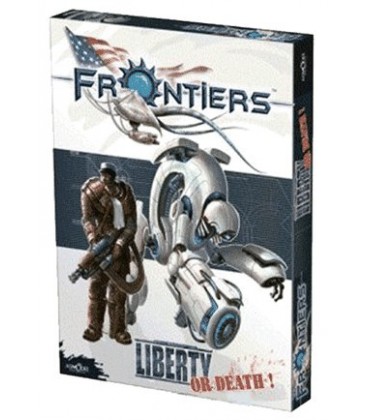 Frontiers is a strategy game in which you lead your units on a futuristic battlefield. The game mechanics are geared for simple fun: orbital bombardment, short-ranged missile fire, hosing down your opponents with uranium-enriched ammunition, head-on and manly assaults in the name of humanity's religious purity.

In short, Frontiers is a simple and spontaneous mix of fury, blood and strategy!

Frontiers - the miniatures game without miniatures...

In the confines of the Pacified Empire of Humanity, the Legion of Democracy brings the marvelous concept of democracy to alien races. Poor creatures who do not know the treasures that our way of life can bring often confront the brave soldiers. In the name of the struggle against the Axis of Evil, our legionnaires have sworn loyalty and obedience to our Emperor, leader and divine inspiration, and fight for the triumph of the law, peace and the Holy Scriptures!
Those who do not stand with us, stand against us!

In the confines of the Zirl galactic hub, the tachyonic combat applets valiantly weather the assaults of the infamous totalitarian terran forces. The brave nanosoldiers courageously fight against the terran brutes who do not suspect the extent of the riches of our antediluvian civilization.

Those who do not stand with us, stand against us!

Take command of your units, terran or alien, and get ready for war!