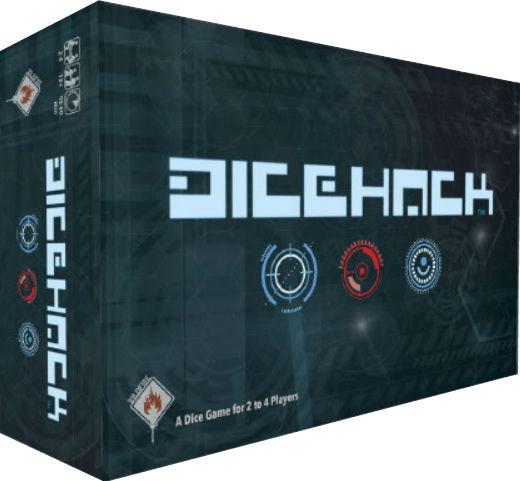 Dicehack is a new dice game about hacking!

The Node protects some of the corporate world's most valuable information, but a group of hackers has found a backdoor. Be the first to exploit this weakness and gain access to the treasures of the Node. Other hackers are hot on your heels, so you'll have to bring all your talents to bear.

Each player in Dicehack is competing against the others. Games take 45-60 minutes, depending on the number of players. The player boards provide nearly all the reference information you'll need to play.

Game play is a combination of wagering resources, luck of the roll, and strategy in capturing, attacking, and defending. Players roll dice and try to add or multiply them to unlock a series of spaces in the Fibonacci Sequence. Math is not for everyone, but you can win at Dicehack using the calculator on your smartphone. You'll wager the number of dice you'll need to open spaces on your board, to attack other players and set them back, to protect your own spaces from attack, and to allow you to change faces on other dice. You'll choose your targets, use your number skills, and manage your resources. The first player that unlocks all eight spaces on their board wins the game.