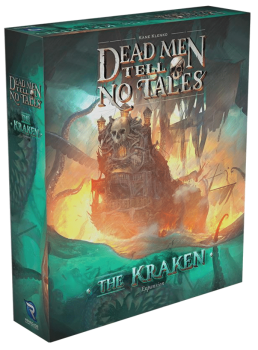 At first, all I could feel was vibrations in my feet, then, a low rumble that seemed to shake the entire ship. It grew louder until it was almost deafening. The ship lurched to one side, and I instinctively reached for the nearest post — despite the flames that crawled up it. There was a screeching sound that seemed to come from everywhere... And then I was on my back. The wood splintered as it crashed around me. The room flooded with water. Then I saw it: a tentacle the size of a ship’s mast crashed through the room, obliterating everything in sight. But I was ready for this! I knew the Kraken was in these waters. So I took up my axe and pushed my way toward the treasure...

A new threat has emerged from the sea! In order to win the Game, in addition to getting the treasure and your Pirates off the ship, you must also kill the Kraken. If the Kraken destroys the ship or pulls it underwater, you lose the Game.

This is an expansion. Dead Men Tell No Tales is required to play.