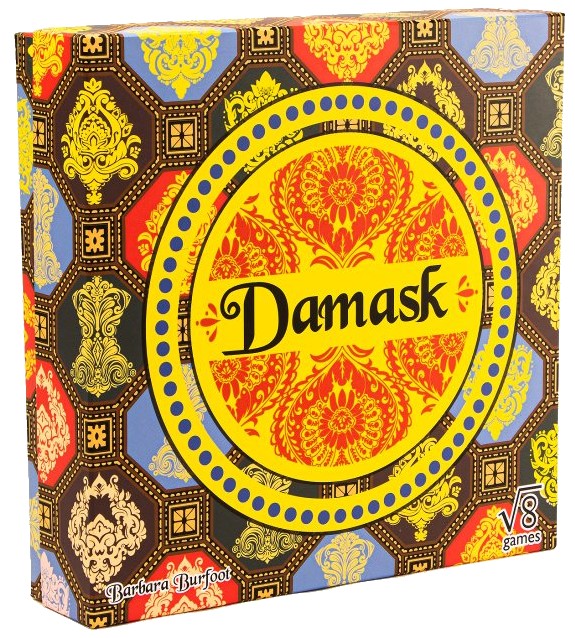 European traders first encountered the Chinese silk patterns in the city of Damascus, and gave them the name 'Damask'. We have worked hard to represent the style and beauty of those patterns in Damask, a clever yet easily accessible game. Our unique components, such as the spinning wheel, don't just look amazing on the table, but also enable interesting choices which make for an original and fun game. Damask is easy to learn, but still has deep decisions resulting from the clever intertwining of its mechanics.

On a turn, players either take a damask card, or you draft cubes from the spinning wheel by choosing a cube, then going clockwise or counter-clockwise until they hit the second cube of any color. Collect all of those cubes, placing them on damask cards as you wish and keeping the remainder in your overstock. Each damask card requires three cubes of one color and two of another to complete. After the required action, you can take one of two optional actions: Take all cubes of one color from an opponent's overstock (with them receiving a guild favor in compensation), or mount a damask by returning the five cubes on it and standing it in your personal holder. You earn 1 coin when mounting a damask and 1 additional coin for each color or pattern it has that matches the previous damask you mounted, i.e., at most 4 coins.

If a mounted damask also matches the season's color or pattern, you gain guild favors. Each guild favor has a color or pattern on it, and you can use them to mount damasks in place of missing cubes, replace damask cards available in the display, mount an additional damask, or avoid paying taxes for extraneous cubes left in your supply at the end of a season. Three guild favors are worth 1 coin at game's end. Damask is a beautiful and thematic pattern creation game, with lovely tactile components, an original and unique cube selection mechanic, and is highly interactive without being at all mean. From playtests through to demos at conventions we have always had a hugely positive response to the game, from the entire range of boardgamers, all ages and genders.