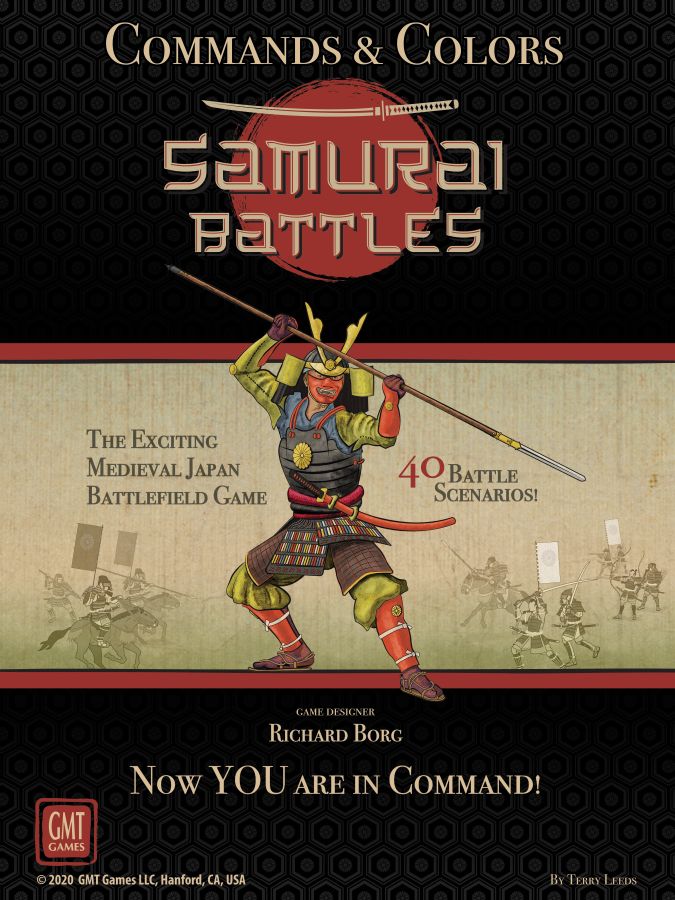 Samurai Battles, from the game company Zvezda, premiered almost seven years ago. And although the game achieved some popularity for the most part the game flew under the radar of most gamers. Perhaps the blame was with the time required to assemble the 100 plus plastic Samurai figures before one could even play the game. And once assembled these plastic models, although truly fine figures, were very fragile, almost too fragile for game pieces. Finally when it was time to pack up after a game, it was extremely difficult to store them away safely.

Yet, the Samurai Battles game still gained a small following of very loyal fans. I tend to believe, many fans who were already familiar with one or more of other games that use the Commands & Colors system; Battle Cry, Memoir ’44, Commands & Colors Ancients, or Commands & Colors Napoleonics, actually brought them to the game. But after a couple of years of dwindling sales and the untimely death of Zvezda CEO Konstantin Krivenko, who was very supportive of the project, the game was phased out.

The Commands & Colors: Samurai Battles game rules allow players to portray important engagements of Japanese history. The battles, included in the scenario booklet, focus on the historical deployment of forces and important terrain features in scale with the game system. The scale of the game is flexible and varies from battle to battle. For some scenarios, an infantry unit may represent an entire clan of soldiers, while in other scenarios a unit may represent just a few brave warriors.

The Command cards drive movement and creates a “fog of war” and presents players with many interesting challenges and opportunities, while the battle dice resolve combat quickly and efficiently. The Honor & Fortune game mechanic will task players to maintain a balance between these two important game elements. The Dragon Cards add an element of suspense and surprise that can bend the rules and instantly change the course of a battle. The battlefield tactics you will need to execute to gain victory, however, conform remarkably well to the strengths and limitations of the various Japanese unit types, their weapons, battle terrain, and written history.

First - there are more units and more unit types in the game. Yep, it will take some time to apply stickers to all the blocks, but doing so is a breeze, when compared to the time it took to assemble figures. When done, blocks are very durable and easy to store.

Second - the battlefield comes on a one-piece mounted map board. Not really any larger in that it still stands at 11 hexes deep by 12 hexes wide, but there are plenty of terrain tiles including new types of terrain, fences, ramparts, castle walls and more.

Third - more scenarios, which no doubt will be the most important feature for anyone who owns and enjoys the previous version of Samurai Battles from Zvezda. If all goes as planned, the game will have around 40 scenarios.

Truth be known, in regard to Zvezda’s Samurai Battles game... A few weeks before the game was to go to the printers, I was informed that the number of plastic figures originally planned for the game had been reduced. Therefore, the number of units in most of the Commands & Colors scenarios had to be reduced. After a few days of scrambling, the Commands & Colors scenarios were adjusted. So even if some of the battle scenarios titles in GMT’s scenario booklet are familiar, they are not exactly the same because they are now back to their original unit deployments, which means more units to command.

Much of what is written here is to give players that own an old version of the game enough information about GMT's enhanced game to provide them with reasons to support this project. But even if you have never played the Zvezda edition or any Commands & Colors game, there is plenty the game has to offer. For me personally, I never stopped believing in the game and I have always known that the Japanese Samurai period provides some very fascinating and interesting historical possibilities. GMT also believes in this and that is why they will make a Great game. Welcome and Enjoy! - Richard Borg