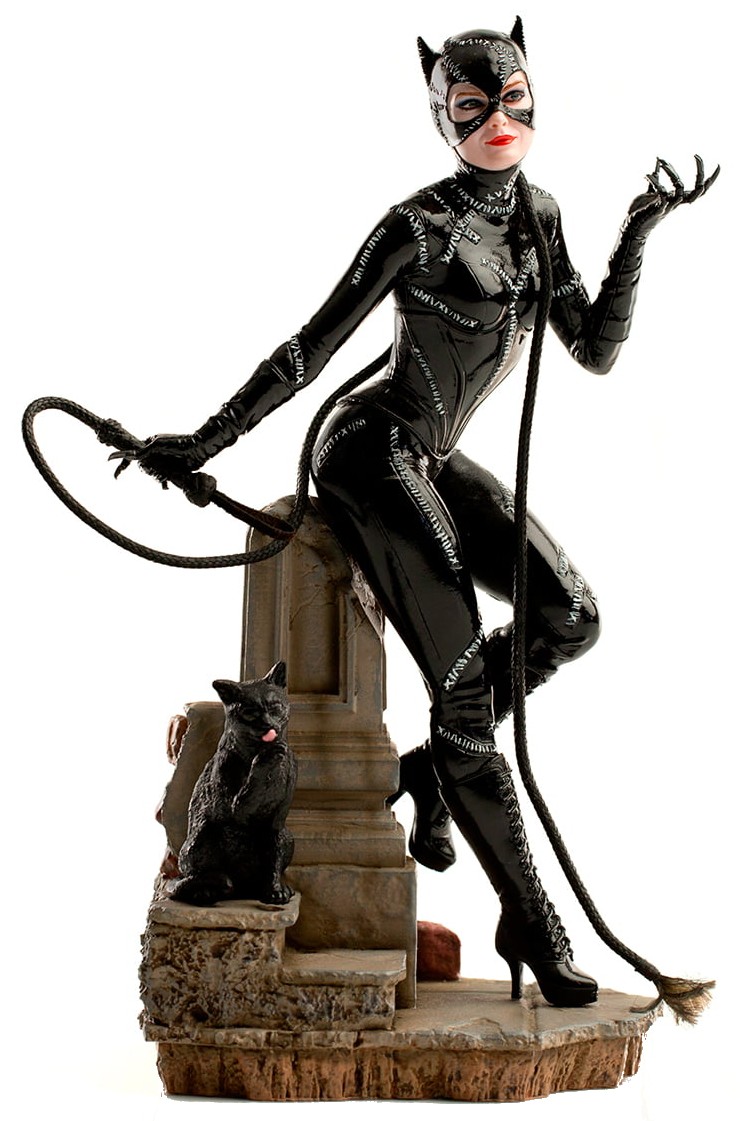 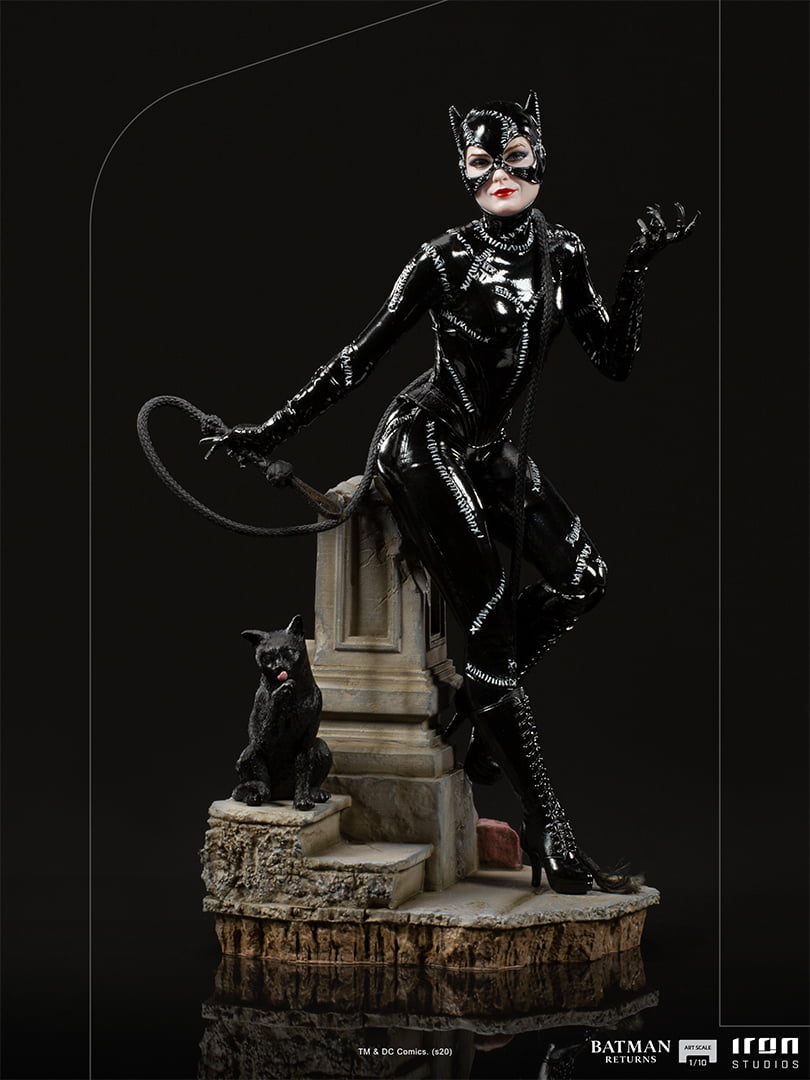 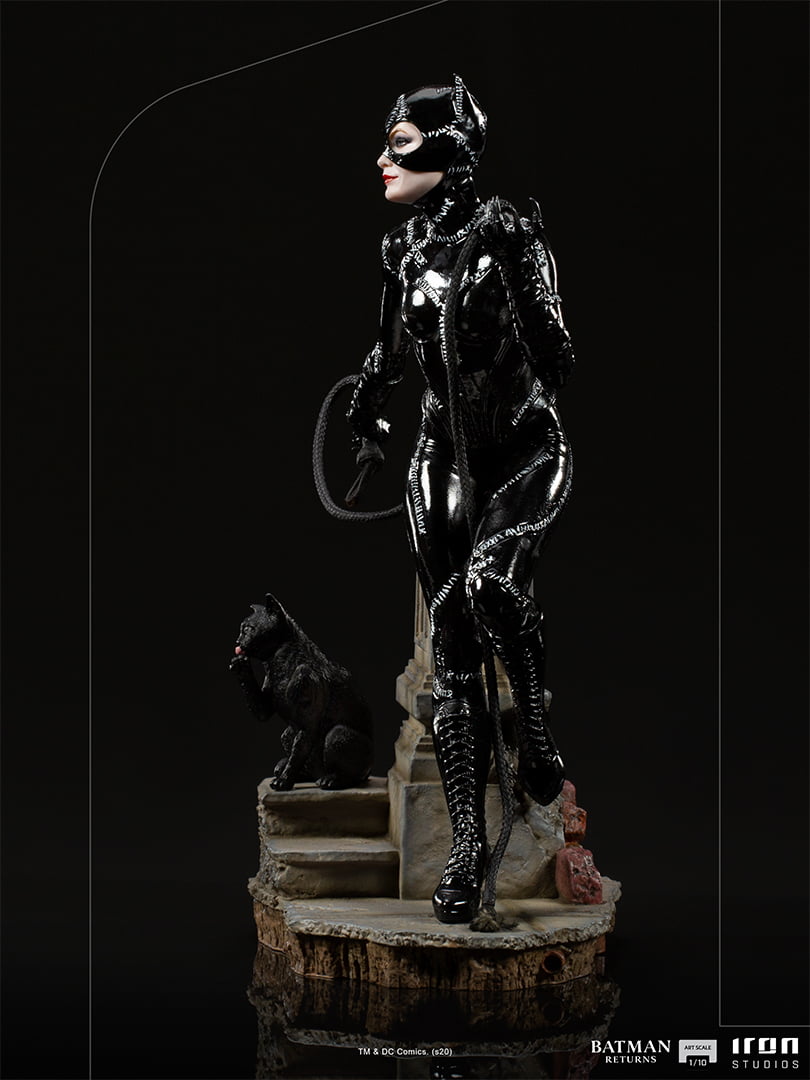 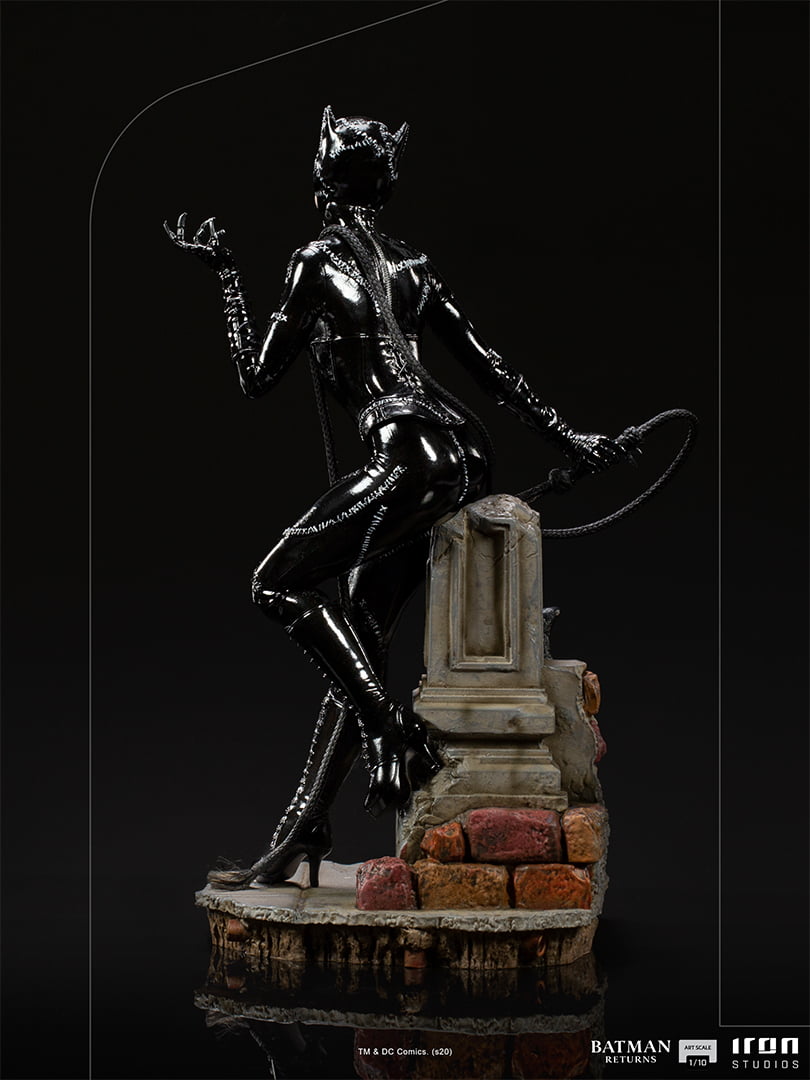 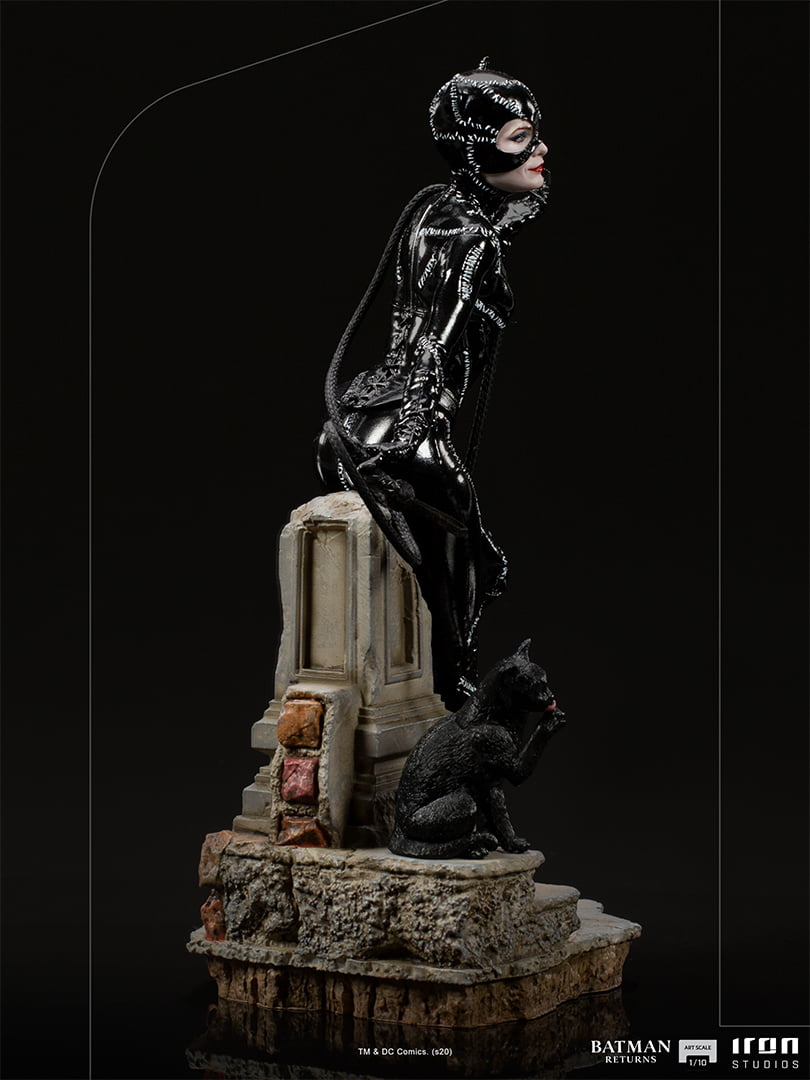 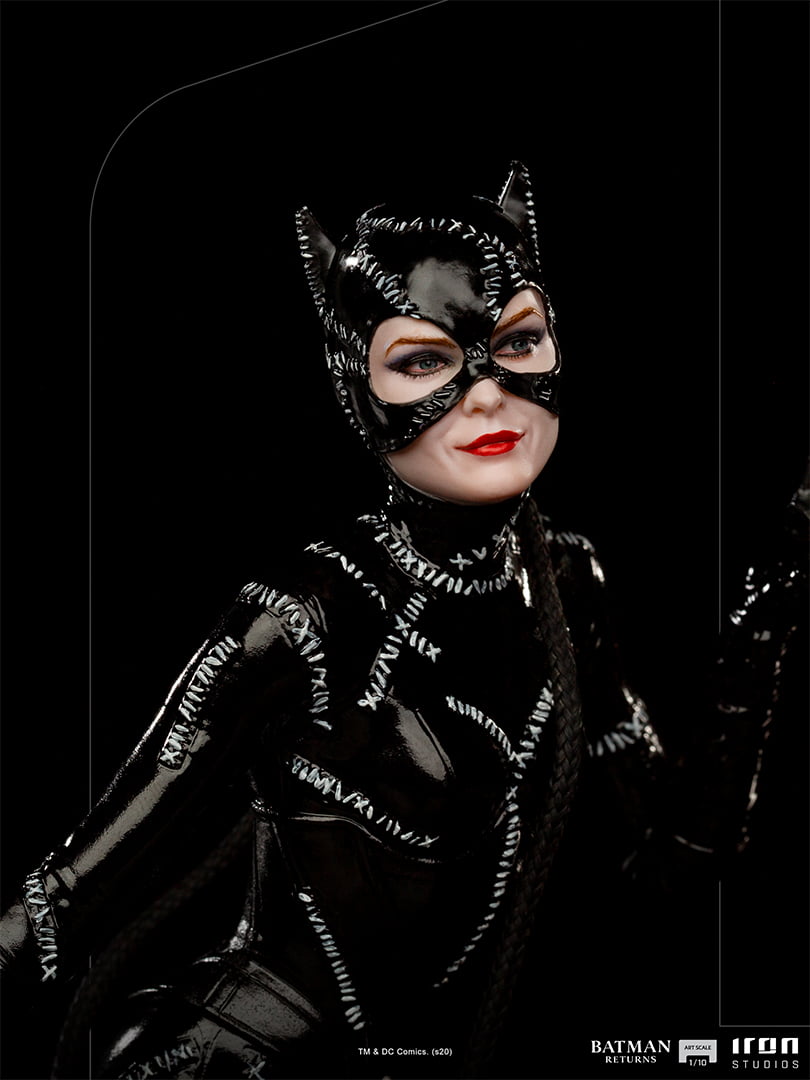 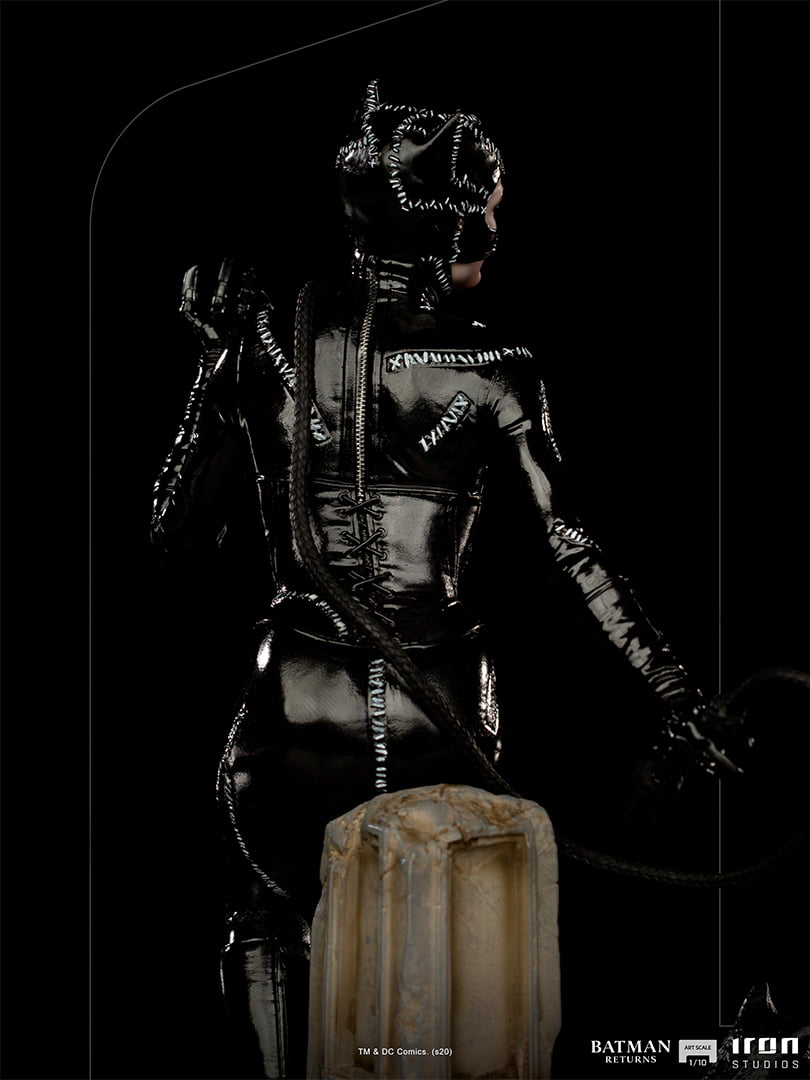 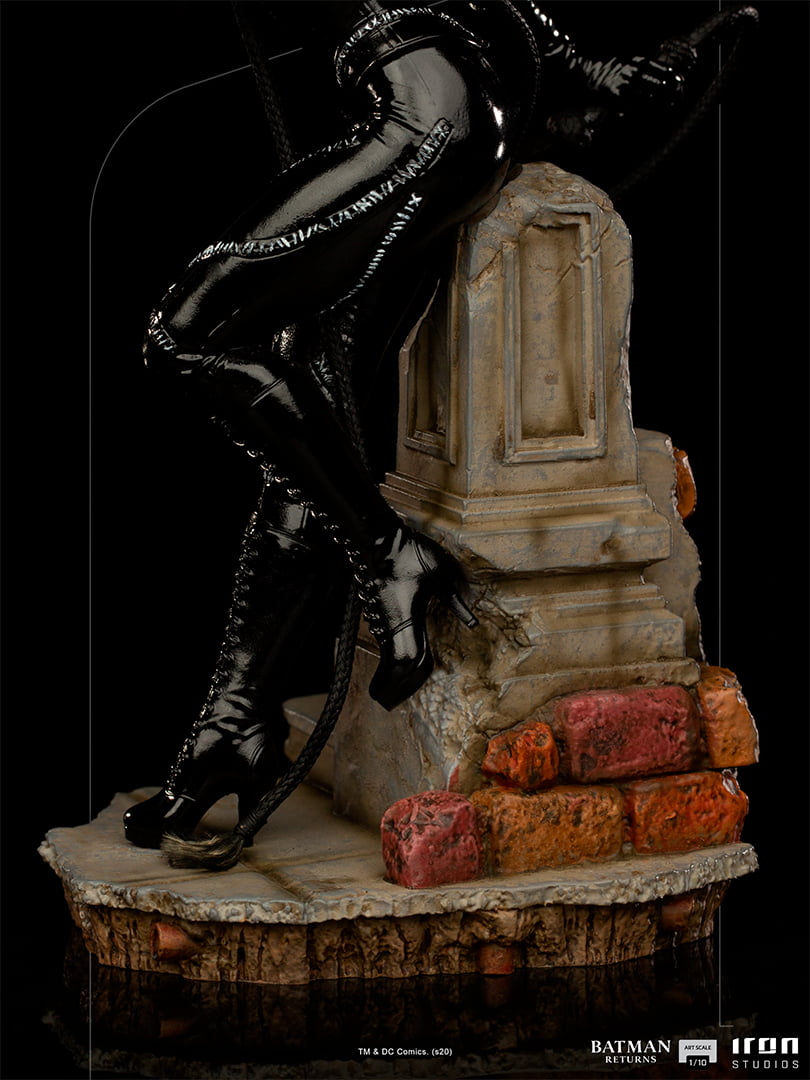 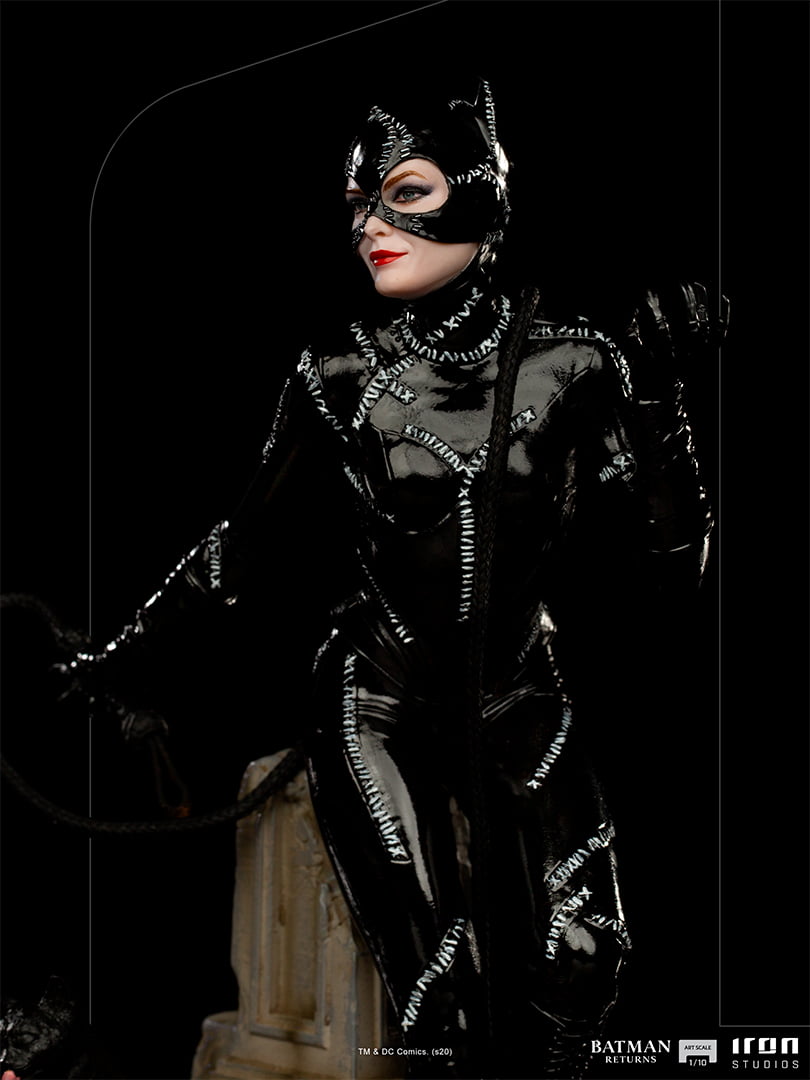 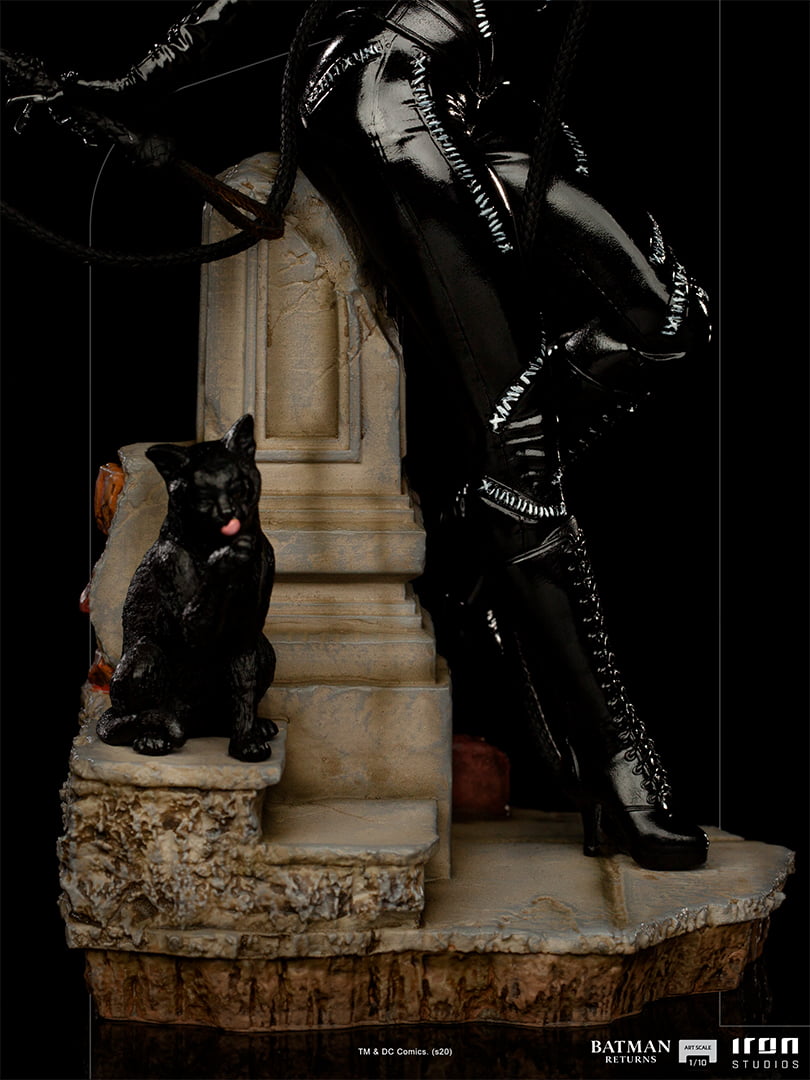 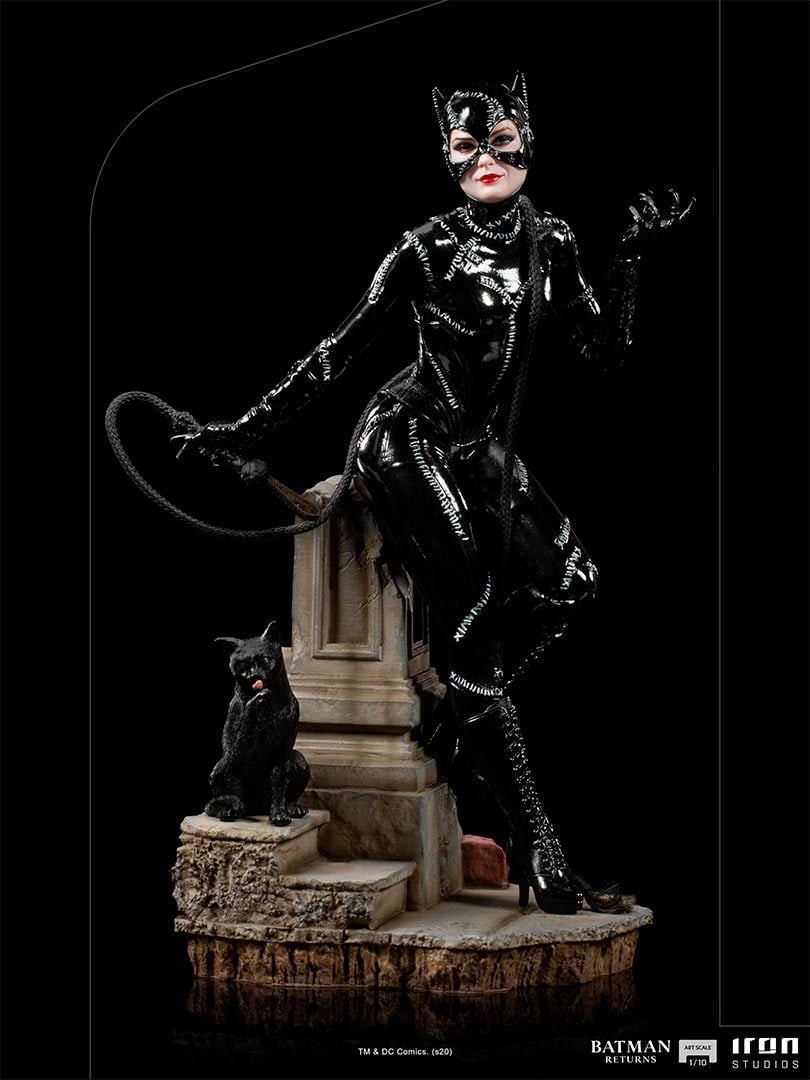 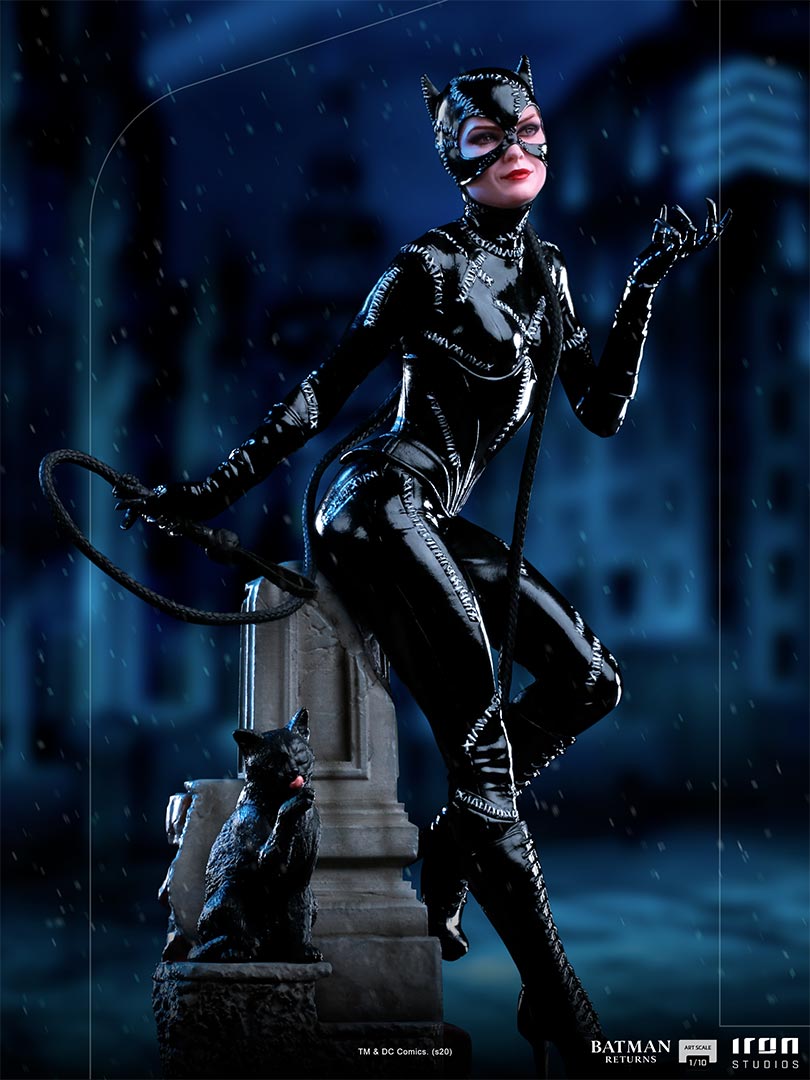 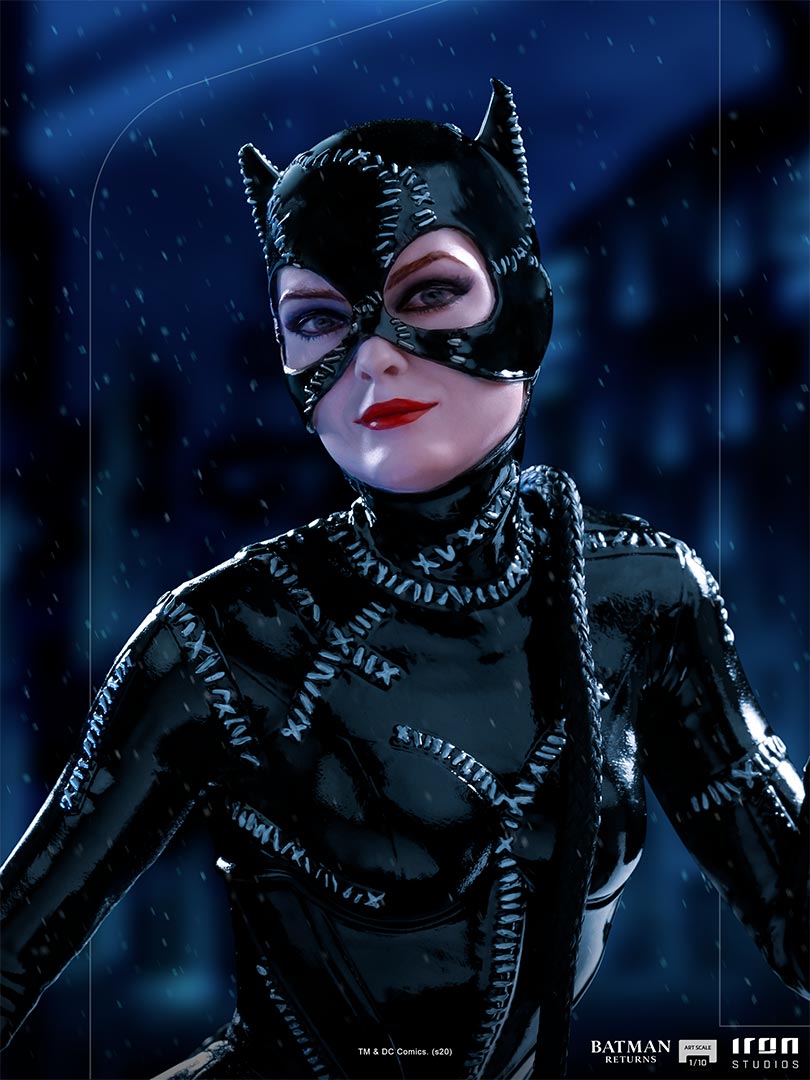 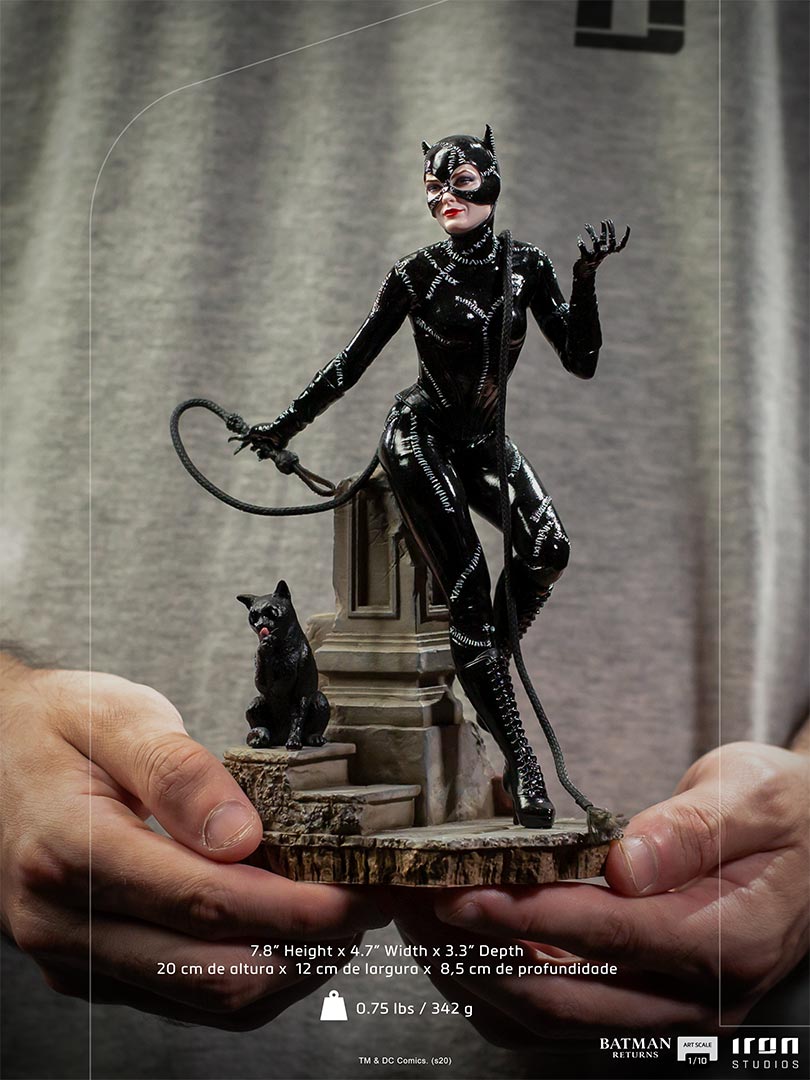 The classic Catwoman from the big screen of the 90’s get’s it’s first version by Iron Studios!

Wielding her whip, the mysterious black masked figure, dressed in a uniform all sewn on sticky vinyl scraps, shows her metallic claws at the tips of her left hand fingers defiantly, supported on a base inspired by the historic and cold buildings of the gloomy Gotham City, with a black cat sitting on the steps of a stair beside her, posing as her mascot and ally. She is Selina Kyle, better known as Catwoman, masterfully played by Michelle Pfeiffer in the classic film ”Batman Returns” (1992) directed by Tim Burton, and thus presented in one more collectible figure from Iron Studios, in the ”Catwoman Statue – Batman Returns – Art Scale 1/10 – Iron Studios ”.

In the film, once a beautiful but lonely and frustrated secretary, when she discovers the plans for a plot by her boss, a tycoon named Max Shreck, to drain Gotham’s energy, Selina is pushed out of a window by Shreck to silence her, but the fall is cushioned by several awnings. Awakened by several cats after passing out in the fall and having a concussion, she suffers a psychotic breakdown and ends up creating her costume and assuming the identity of the feline villain.

Created in 1940 by Bill Finger and Bob Kane, the Catwoman is one of the most famous characters in the comics and is among the main characters in the Batman universe, present in almost all adaptations of the hero outside the comics. Courageous, adventurous and cheating, she always had a troubled romantic relationship with the Batman, going from being just a thief to becoming an anti-hero.