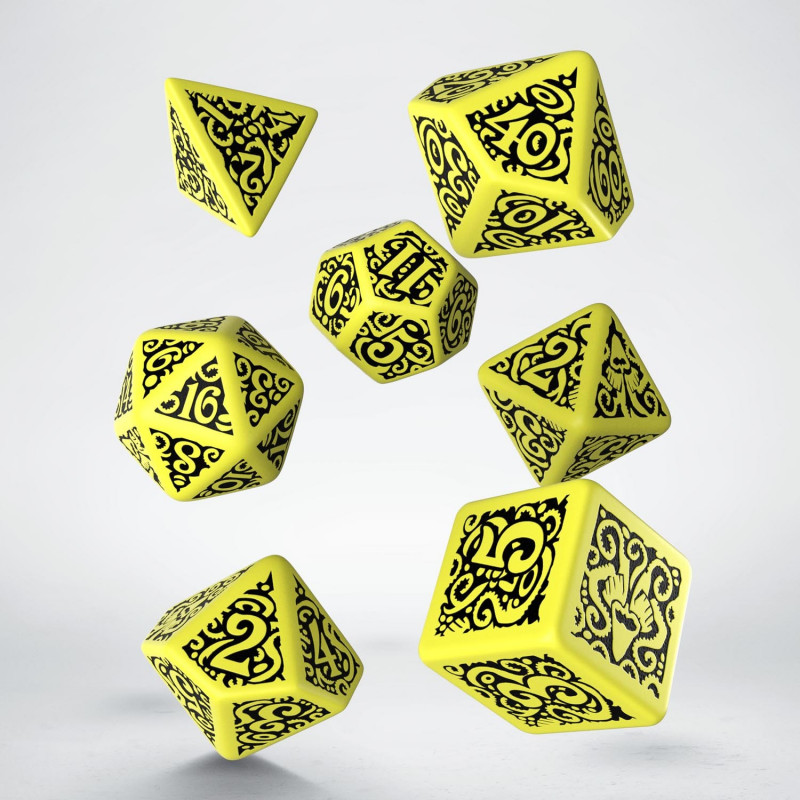 Hastur is the Great Old One who escapes our perception and understanding. His being is based on the incomprehensible idea of multidimensionality, far beyond our cognition. We wanted to praise the might of this deity in set dedicated to Hastur - Call Of Cthulhu The Outer Gods Hastur Dice Set (7) from Q WORKSHOP. The Great Old One exists at the same time in infinitely many realities. We tried to capture the essence of Hastur as the Deity pervading the universe with many faces on the beautiful polyhedral dice in color of the King in Yellow, along with the black engraved symbols and figures. Sophisticated carvings in high quality plastic will certainly make it easier to understand the depth of the power of this astonishing being. This set is one of the few praising the Outer Gods from Cthulhu Mythos, that have been originally funded in reversed color version through Kickstarter, The dice were made using all rules of non-Euclidean geometry known to our investigators and tested in terms of depriving sanity and winning battles during all RPG games. Dice have always scored high. Usually when needed.

Multidimensionality means that Hastur can be anywhere in innumerable incarnations and talk to each of his cultists at the same time. They say too that to summon Hastur, you only need to say his name three times. That's why they call him He Who Is Not To Be Named. Oops, did we just use his name more than three times?? Probably yes, but many madmen claim that, when they called Hastur, the gifts of masterly made objects dedicated to the Old One, especially those with the official patronage of Chaosium, allowed them to survive the encounter. They're worth having when a player or the Game Master says ˜Hastur' too many times.
(In the text the name of the Great Ancient One was used ten times, and you can still buy dice dedicated to Hastur from Q WORKSHOP. This is the best proof of their advantages).