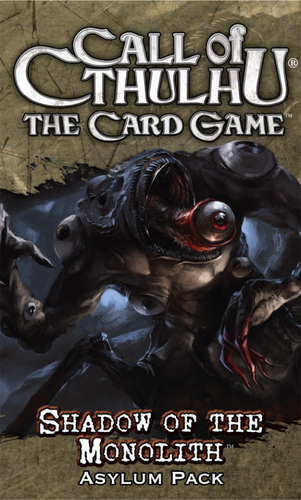 Call of Cthulhu: The Card Game - Shadow Of The Monolith

The sixth and final Asylum Pack in the "Ancient Relics" cycle for  Call of Cthulhu: The Card Game,  Shadow of the Monolith  continues the cycle's development of the exciting new Relic trait and concludes the cycle's exploration of the Ancient Ones' global reach.

Sixty new cards (three copies each of 20 different cards) take the game's different factions to the South Pacific, where they are greeted by malevolent cultists and their dark spells. Who will prosper when the region's Relics are unearthed? Who will fall mad or die along the way?  Shadow of the Monolith  removes the final veils of the Ancient Relics cycle of Asylum Packs,
but its secrets aren't for the faint of heart!