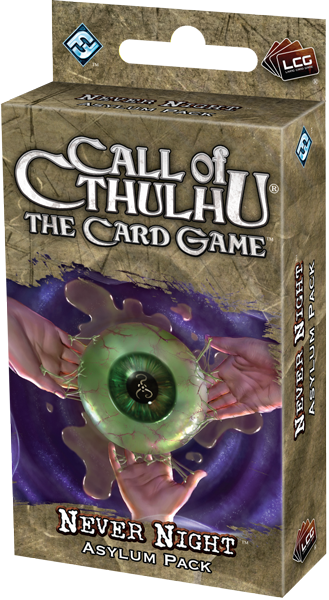 A voice from other epochs belongs in a graveyard of other epochs. As it was, however, the noise shattered all our profoundly seated adjustments all our tacit acceptance of the inner antarctic as a waste as utterly and irrevocably void of every vestige of normal life as the sterile disc of the moon.     H.P. Lovecraft, At the Mountains of Madness

The hunt for relics of power takes the different factions of Call of Cthulhu: The Card Game to the glaciated shores and frozen mountains of Antarctica in Never Night, the fourth Asylum Pack in the Ancient Relics cycle. Dedicated cartographers, gun-toting thugs, insidious cultists, and terrifying beasts seek to unlock the secrets frozen in time beneath layers of ice.

The Silver Twilight undertakes its first expedition to Antarctica, hoping to unlock powers previously undreamt and unknown. Meanwhile, mad sailors, gibbering monsters, corrupted cultists, scarred hit men, and others all struggle to advance their own goals in the desolate climes of a land where all summer the sun glares down. With three copies each of 20 new cards, Never Night provides each faction exciting new cards that reinforces their existing methods of operation as they drill into the ice for items of unfathomable power.