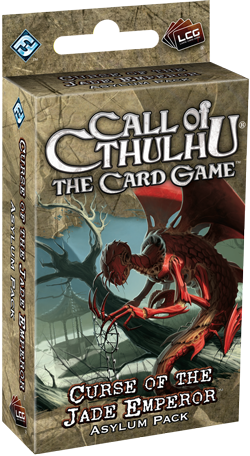 Call of Cthulhu: The Card Game - Curse Of The Jade Emperor Asylum Pack

The Great Old Ones' insidious reach continues to spread and Curse of the Jade Emperor, the second Asylum Pack of the Ancient Relics cycle, follows the tendrils of evil into the Far East. Prepare for restless dead, secret societies, and unholy artifacts!

Ancient Relics is based on the theme of the global influence of the Ancient Ones and their cults and moves the action from H.P. Lovecraft's dread-filled New England to the wider world. In Curse of the Jade Emperor players will find exotic, yet hauntingly familiar characters and tales, pulled from the myths and legends of ancient China. The Middle Kingdom's undying past collides with a present made all the more uncertain through the interference of diverse otherworldly actors.

The pull of China is strong and in Call of Cthulhu it attracts academics from Miskatonic University, eager to study the history and artifacts of one of the world's oldest civilizations. The forces of law and order also come to do battle with some of the world's deadliest criminal organizations. Curse of the Jade Emperor also follows Ancient Relics' over-arching theme of artifacts with great and terrible power reoccurring throughout history. Pack your bags for a voyage to the Orient in Curse of the Jade Emperor!