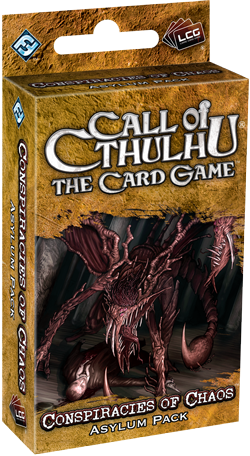 Secrets and mysteries abound in a classic Asylum Pack, which is emerging from the shadows to crawl back into the light. Conspiracies of Chaos, the fifth Asylum Pack in the Forgotten Lore cycle of expansions for Call of Cthulhu: The Card Game, returns!

Conspiracies of Chaos reintroduces to the Living Card Game environment this intriguing Asylum Pack, updated to the 60-card per pack format (three copies each of 20 unique cards). The included cards have been updated to incorporate the most recent FAQ. In addition, the text on a number of cards has been altered from its original printing, adjusting for game balance and rules clarity.