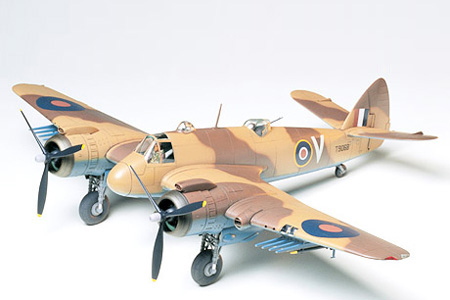 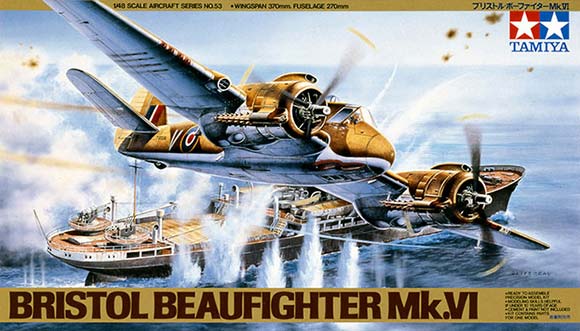 About the Bristol Beaufighter Mk.VI

Bristrol's "Beaufighter" was one of the most successful and widely used twin engines fighter types during WW2. The first series production Beaufighter MK.1 entered service in September 1940. With its four nose-mounted 20mm cannons and six 7.7mm machine guns in the wings, this stub-nosed fighter became the most heavily armed aircraft in service with the RAF during the war.

As the German Luftwaffe eventually turned to night bombing in autumn of 1940, priority was put on night fighters and the first operational Beaufighters were fitted with the Airborne Interception (AI) radar, which designated the Mk.1F (F was suffix for Fighter Command). Meanwhile, its rugged construction was thought ideal for long range fighting and escort duties, and the Mk.1C under the Coastal Command became ready for initial operations in late March 1941. Introduction of the more powerful, 1,670hp Hercules VI engines by late 1941 resulted in the Mk.VI. A 7.7mm machine gun being added in the observers canopy for rearward defense, and the horizontal tail plane was modified to have a 12 degree of dihedral, to eliminate the unstable characteristics observed on the preceding types.

The Beaufighters saw active service not only above Europe but also in the Mediterranean, North Africa, Middle East and Pacific area. More than 5,900 Beaufighters of various types were produced.