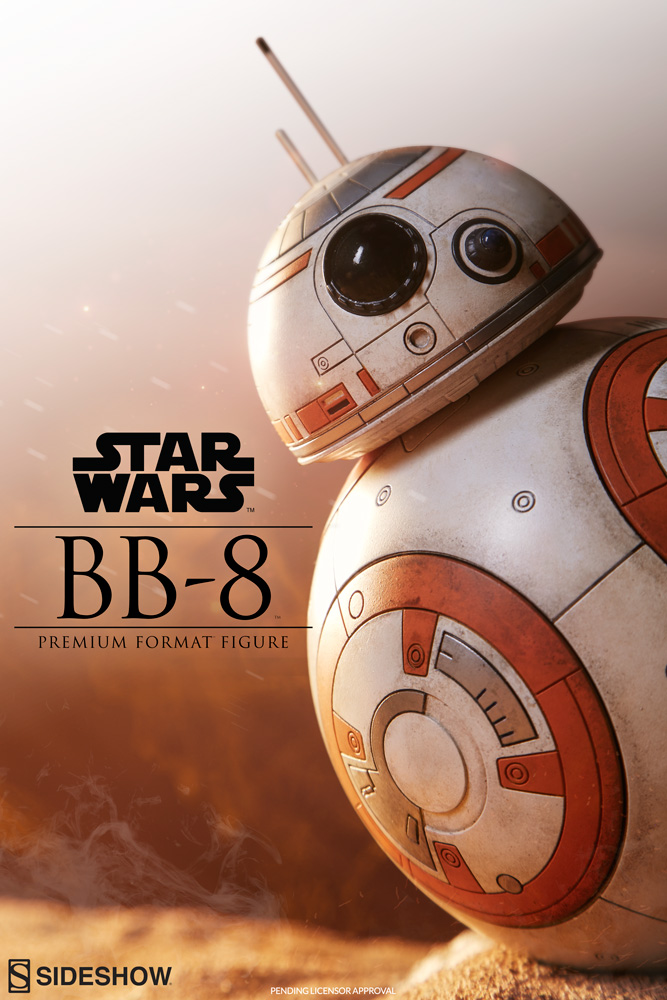 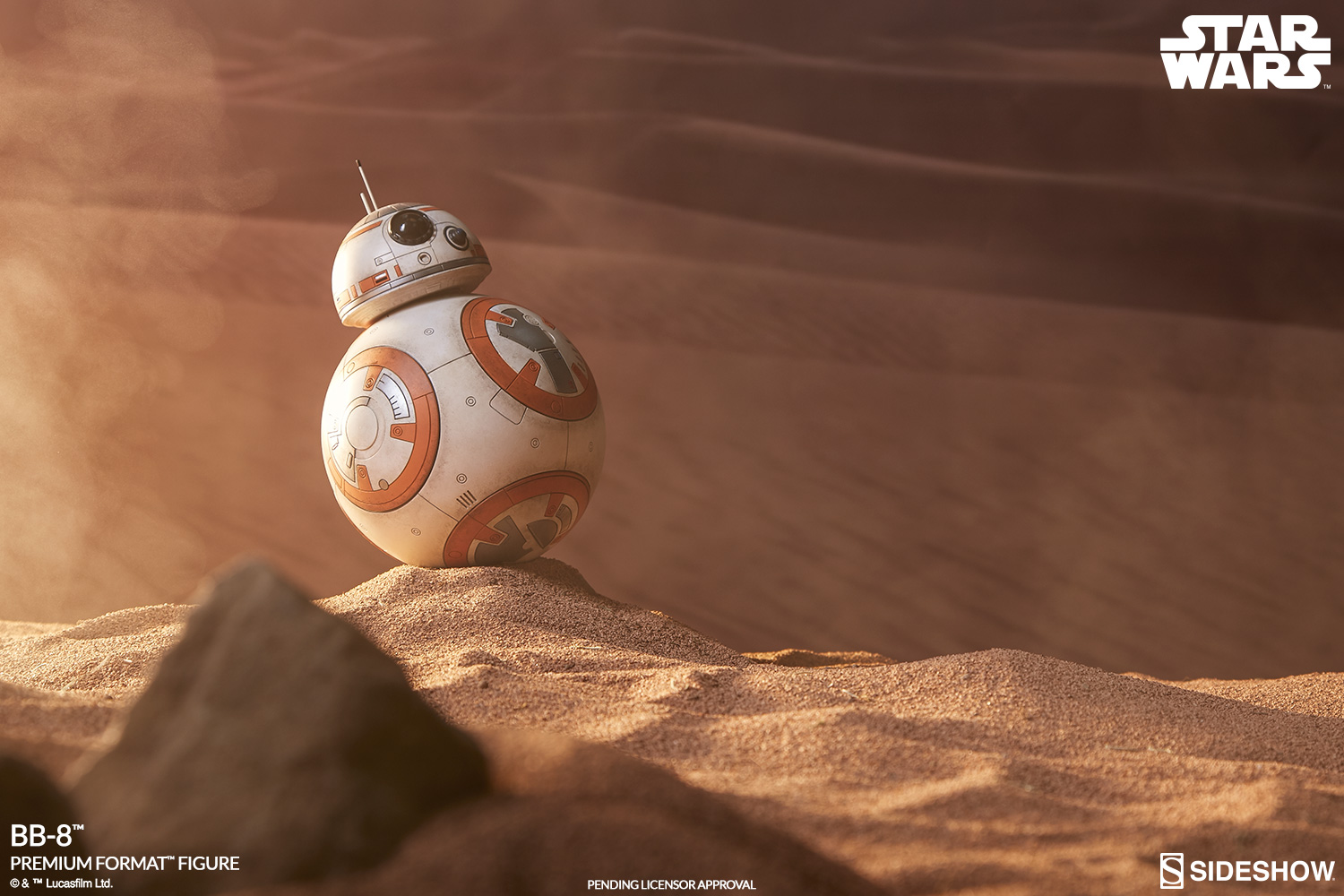 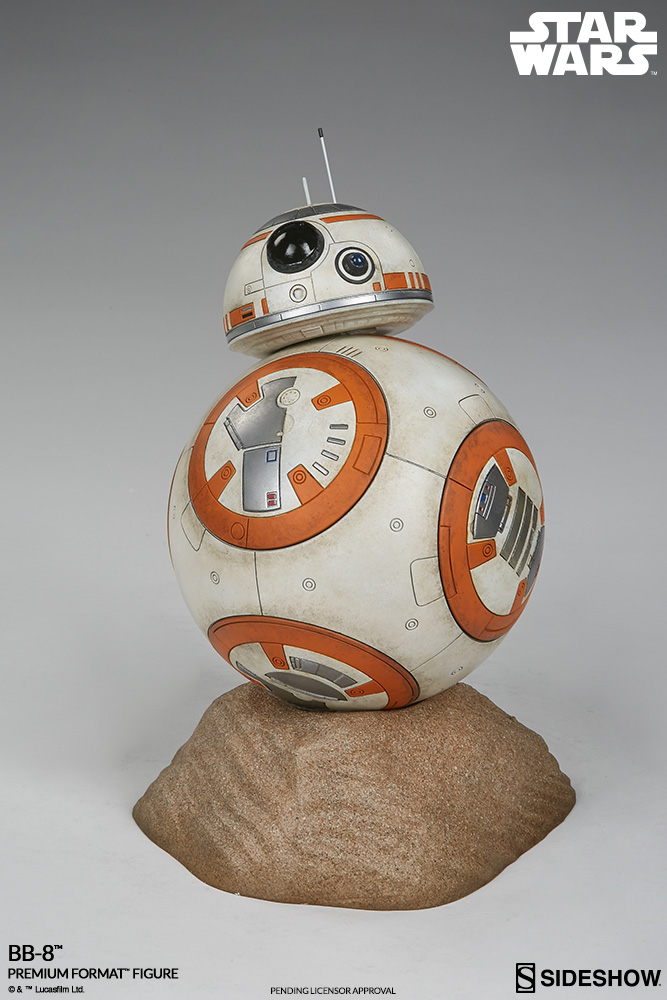 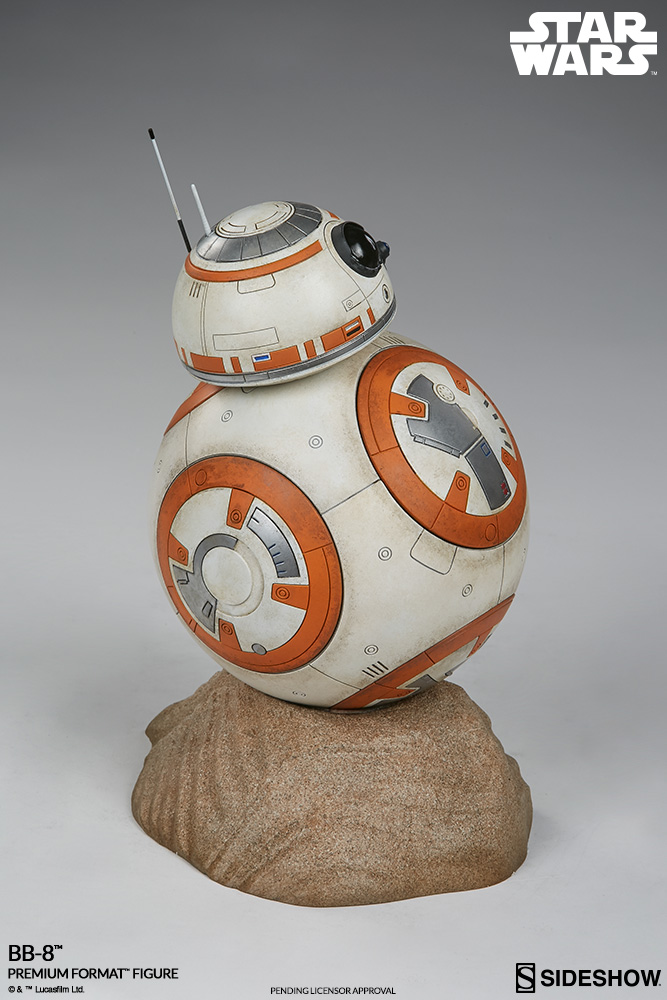 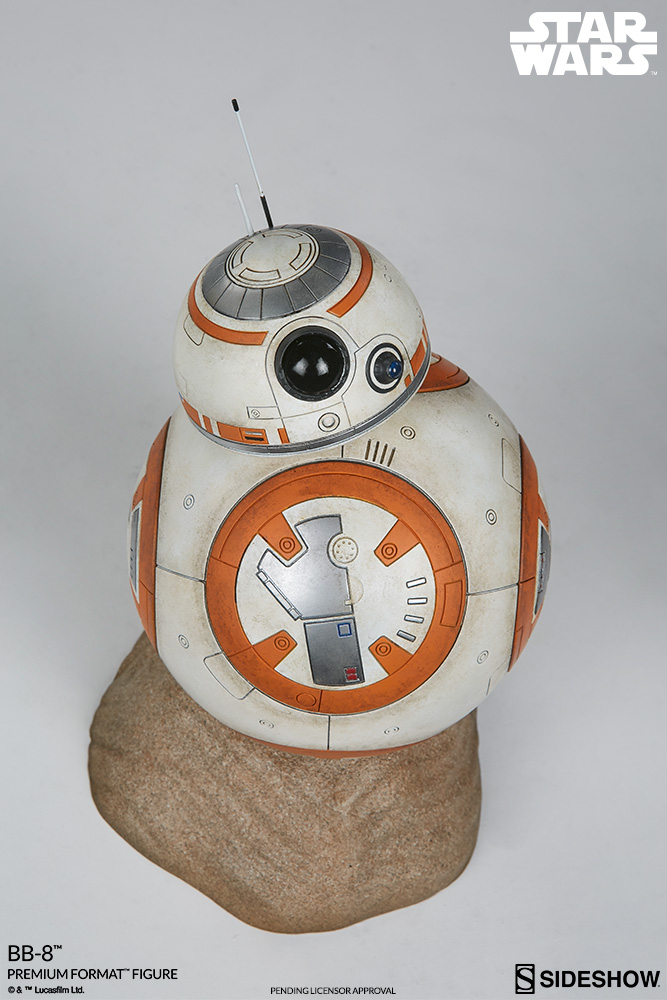 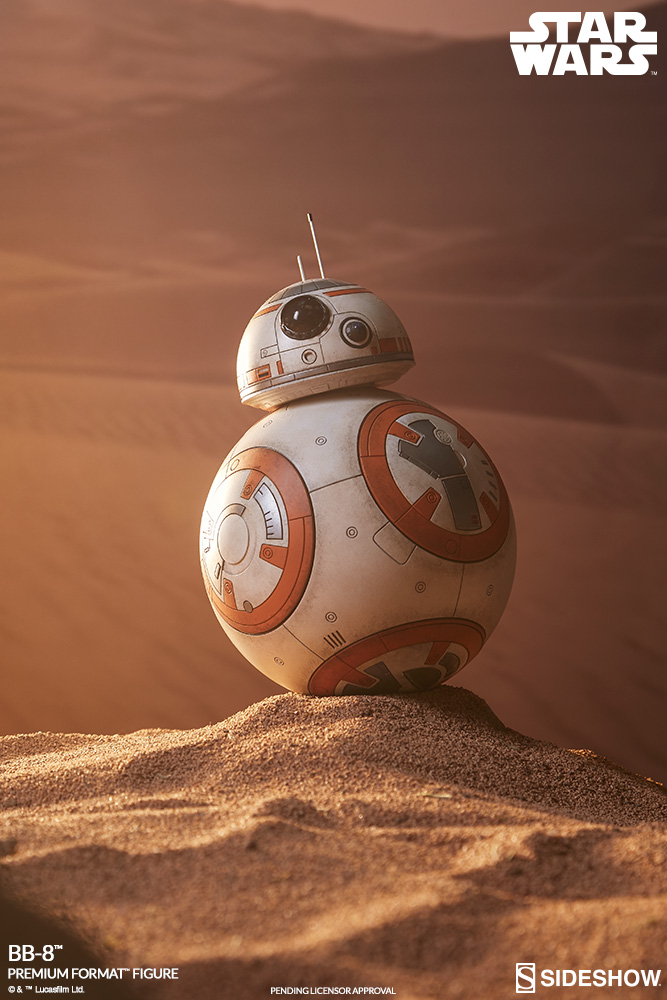 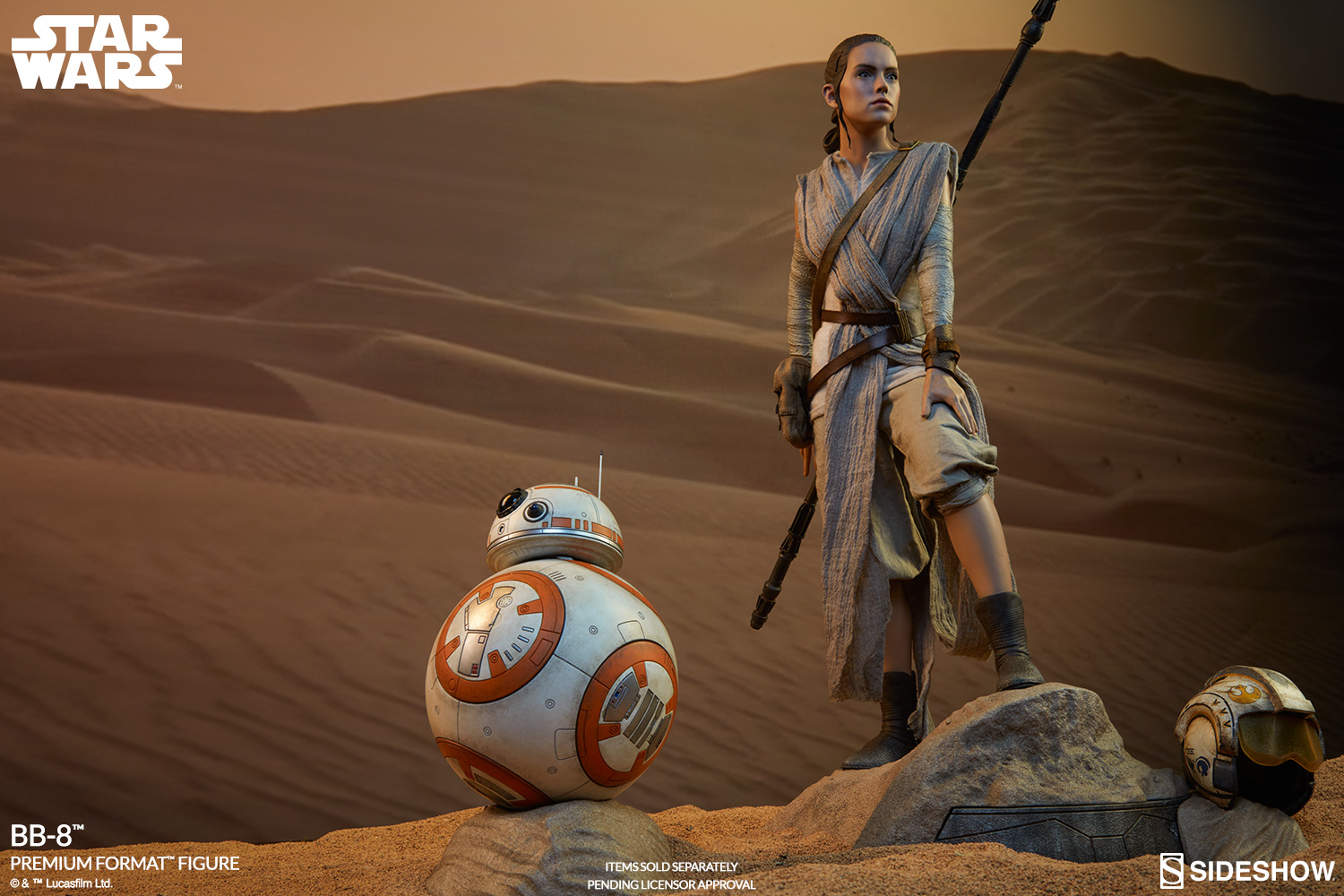 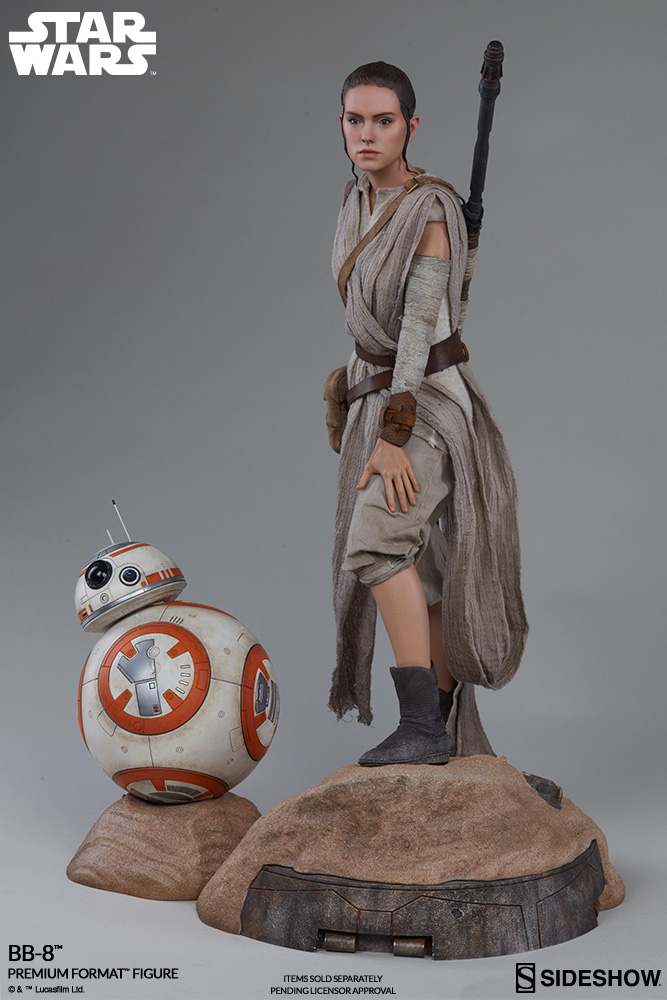 ABOUT THIS PREMIUM FORMAT ,¢ FIGURE

It all began as a sketch drawn by J.J Abrams on a napkin one evening.
A deceptively simple design comprising of little more than a ball with a dome on top, but Abram's novel idea for a droid (which he named BB-8) was quickly brought to life by special effects wizard Neal Scanlan and became both an engineering marvel and one of the most exciting and innovative practical effects in recent movie history.
Abrams and his creative team also managed to develop a droid that was packed with charm and personality.  BB-8 was the little robot that captured the hearts of everyone who saw him an adorable new member of the Star Wars universe!

BB-8 is a BB Unit Astromech droid, a friend, and companion to Resistance pilot Poe Dameron. In Star Wars: The Force Awakens we saw him roll adorably into action alongside Poe, Rey, and Finn as they fight The First Order. He quickly became an office favorite character here at Sideshow HQ, and it is our pleasure to offer him for the first time in our flagship Premium Format ,¢.

From the bottom of his base to the tip of his antenna, BB-8 stands 9  tall, and he is simply overflowing with the little intricacies that you have come to expect from our Premium Format ,¢ Figures.

We've captured every subtle nuance of BB-8's ingenious design, from the surprisingly soulful and character filled eyes  of his photoreceptor, to the stained, scratched and dirty panels of his spherical body, each little detail helps to make this chirpy little Astromech come to life and steal your heart.

Both BB-8's head and torso feature integrated LED light up features, bringing another layer of screen-accurate detail as well as added visual charm to this adorable BB unit.

BB-8's desert themed base is designed to echo the visuals found on our Rey Premium Format ,¢ Figure.

Whether you choose to display him on his own, or as a companion piece to Rey, we know he'll be one of the prized jewels in your Star Wars collection! 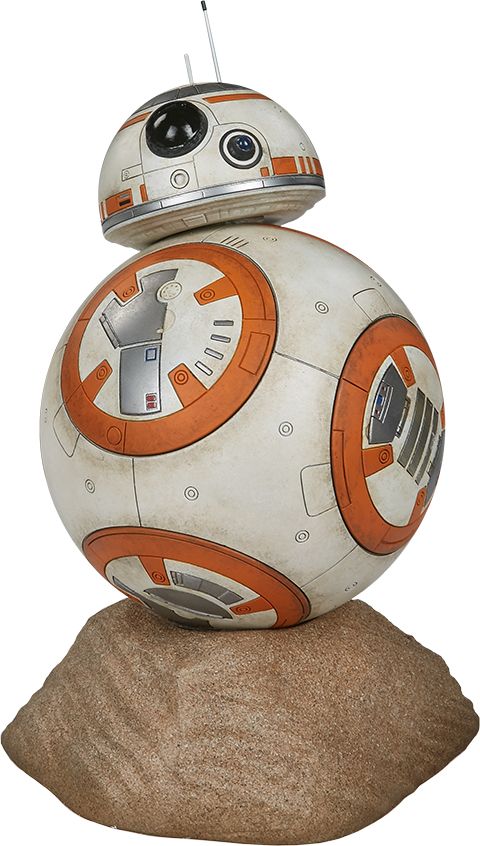