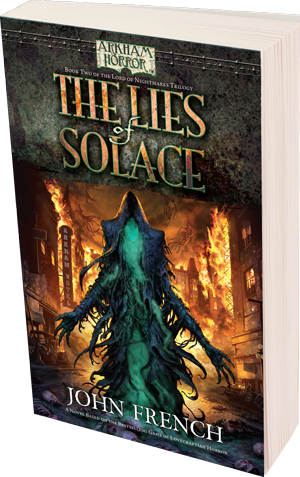 Arkham Horror: The Lies of Solace

The Lies of Solace is the second novel in The Lord of Nightmares Trilogy, a series of grim tales based in the wildly popular Arkham Horror universe! This disturbing tale explores the depths to which desperation and tragedy can plunge us, and the grim consequences that await those who surrender to grief and pain. When Jacqueline Fine experiences disturbing visions of a robed man before the crumbling edifice of a city, she's determined to prevent her nightmare from becoming a reality. Meanwhile, an Arkham doctor tries desperately to save his only daughter from the hands of a dark cult, and a distraught bootlegger attempts to unravel the mystery behind the sudden silence of his fiancee's letters. Will these three strangers be able to save everything they love from a terrifying future, or has their suffering only just begun?