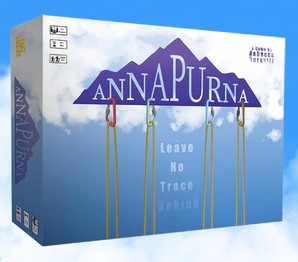 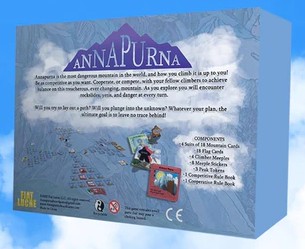 Climb the most dangerous massif in the world! In Annapurna you co-operate — or compete — with your fellow climbers to achieve balance on this treacherous, ever-changing mountain. As you explore your mountainside made of cards you will encounter rockslides, yetis, and danger at every turn!

You start with a deck of 18 mountain cards, laying out 15 of them face down in a pyramidal mountain and keeping the rest as your backpack. Each card has a yin or yang value of 1-4 on it as well as a special effect. To start the game, each player reveals a card in their bottom row, carries out the effect, then places their meeple on the card.

On a turn, you explore an adjacent card on a non-lower level by flipping it over, carrying out its effects, and placing your meeple on it; trade a card from your backpack with a card in your mountain, pacing the replaced card in a cache; or hide a card, which is the same as trade, but on another player's mountain. If your face-up mountain cards have a balance of yin and yang, you can remove them from play.

Once you reach the mountain's peak, you add your cache to your hand, then you can spend your turns doing nothing, dropping cards from your cache face up on the mountain to better balance your yin and yang, and throwing cache cards onto another player's mountain, who then flips up one of your remaining face-down cards.

In the competitive game, when everyone is at the peak, players score 3, 2, and 1 flags based on who is most balanced, with ties being broken in favor of whoever ascended their mountain first; play multiple rounds until someone collects nine flags and wins. In the co-operative game, you end the game after everyone has scaled their mountain, and you all win only if everyone has an even yin-yang balance.