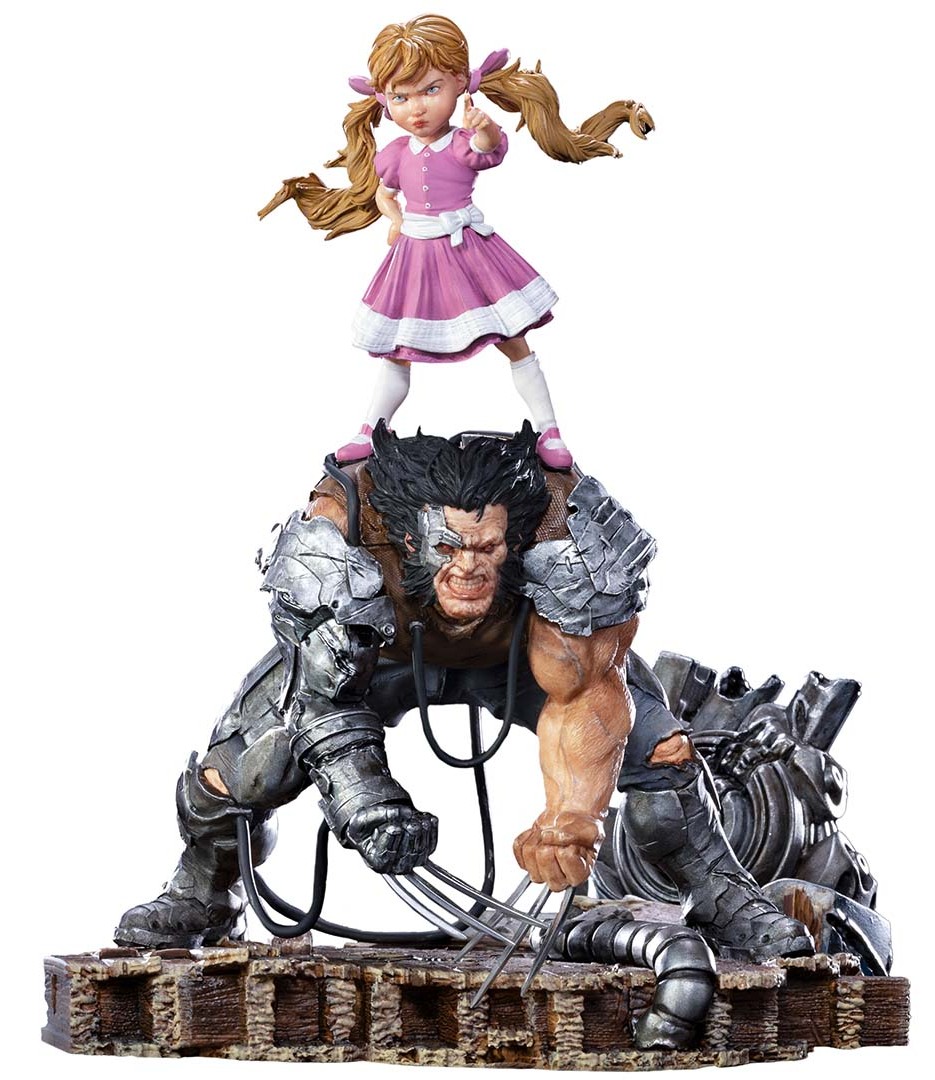 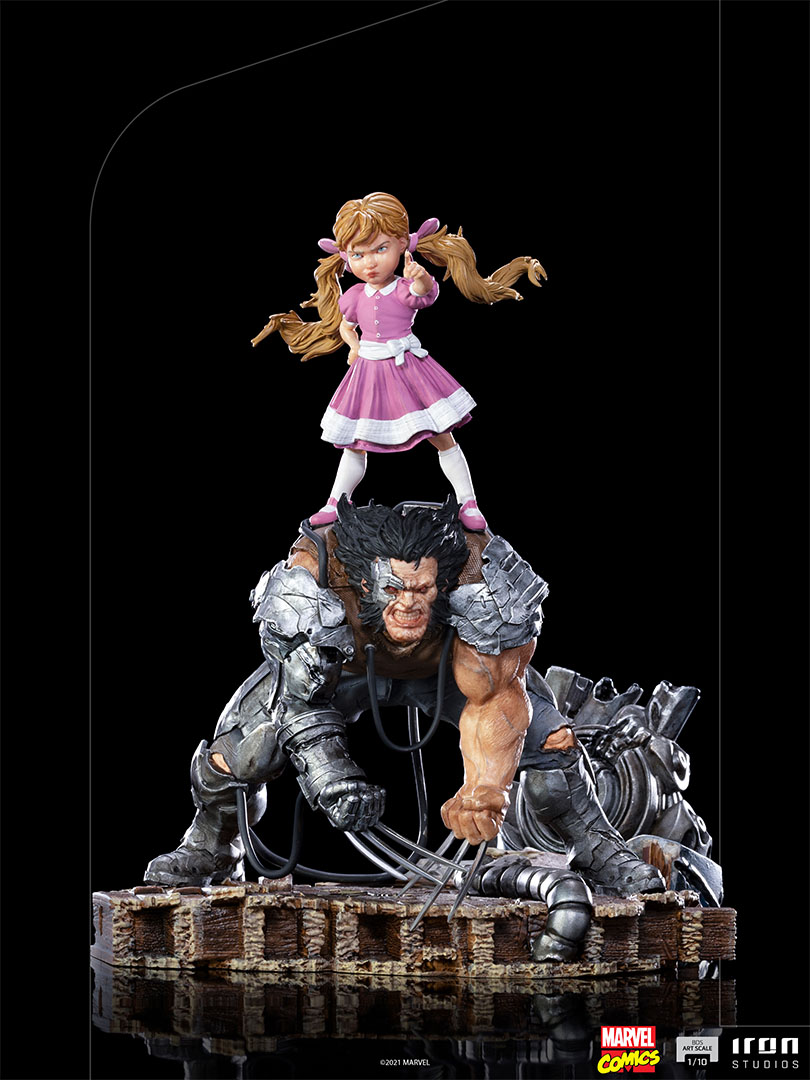 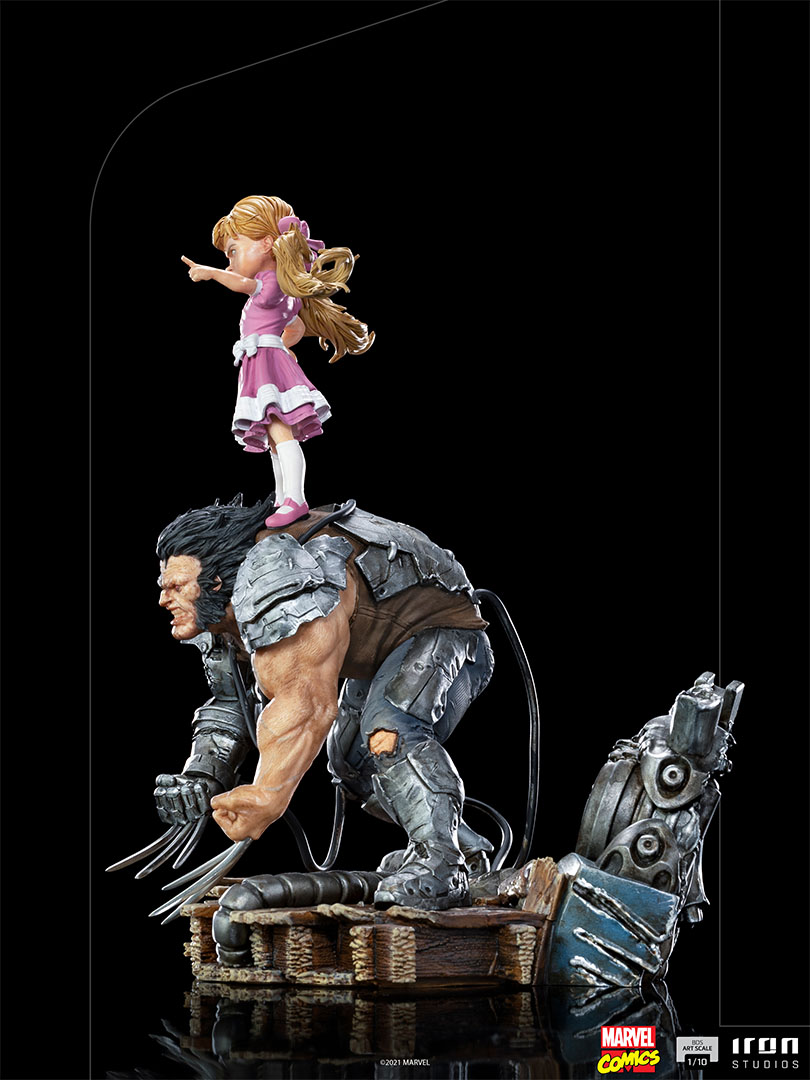 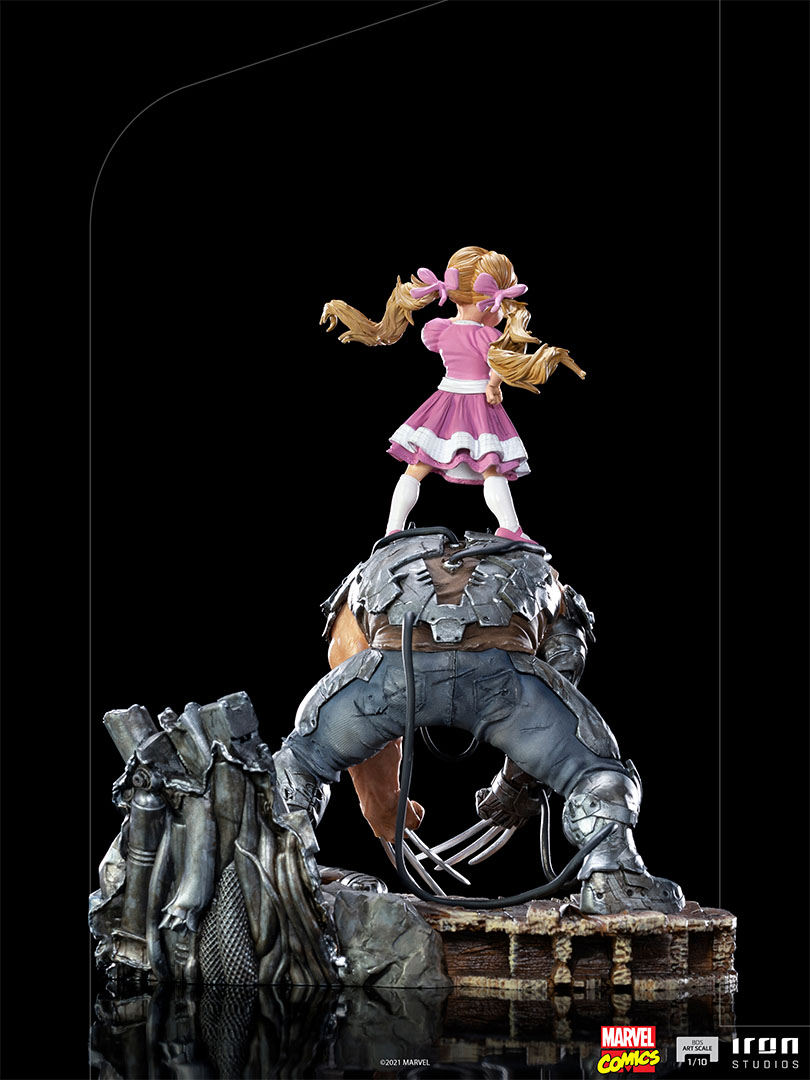 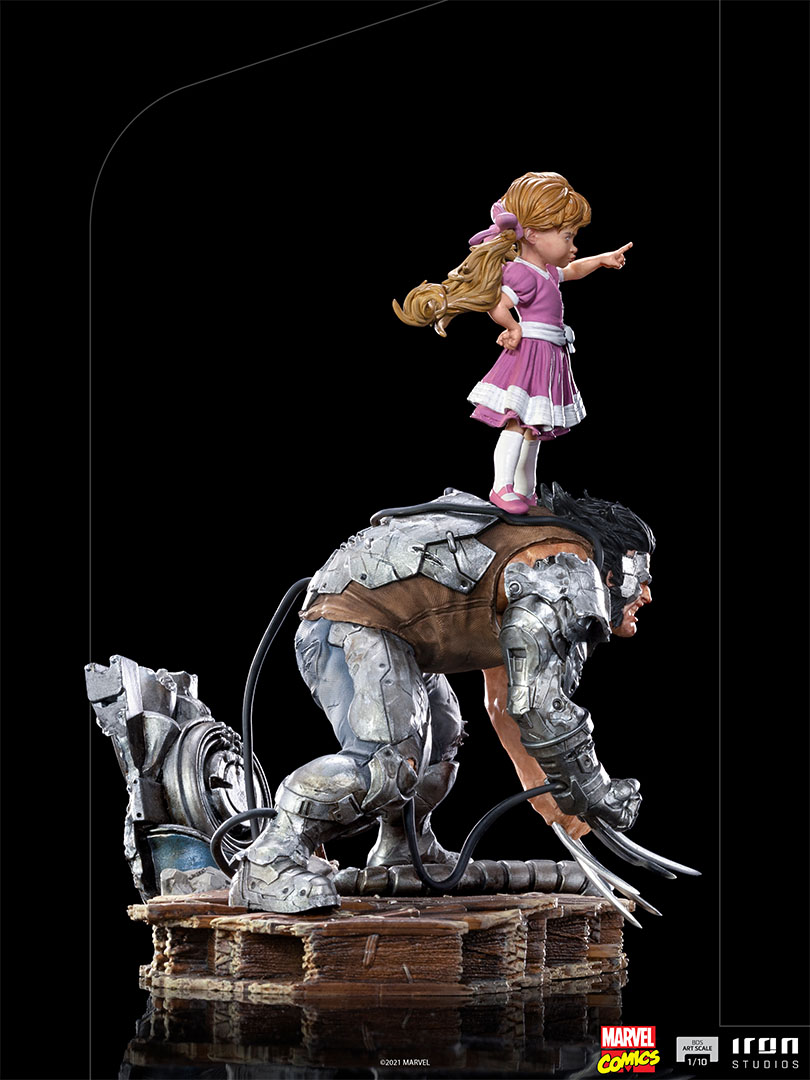 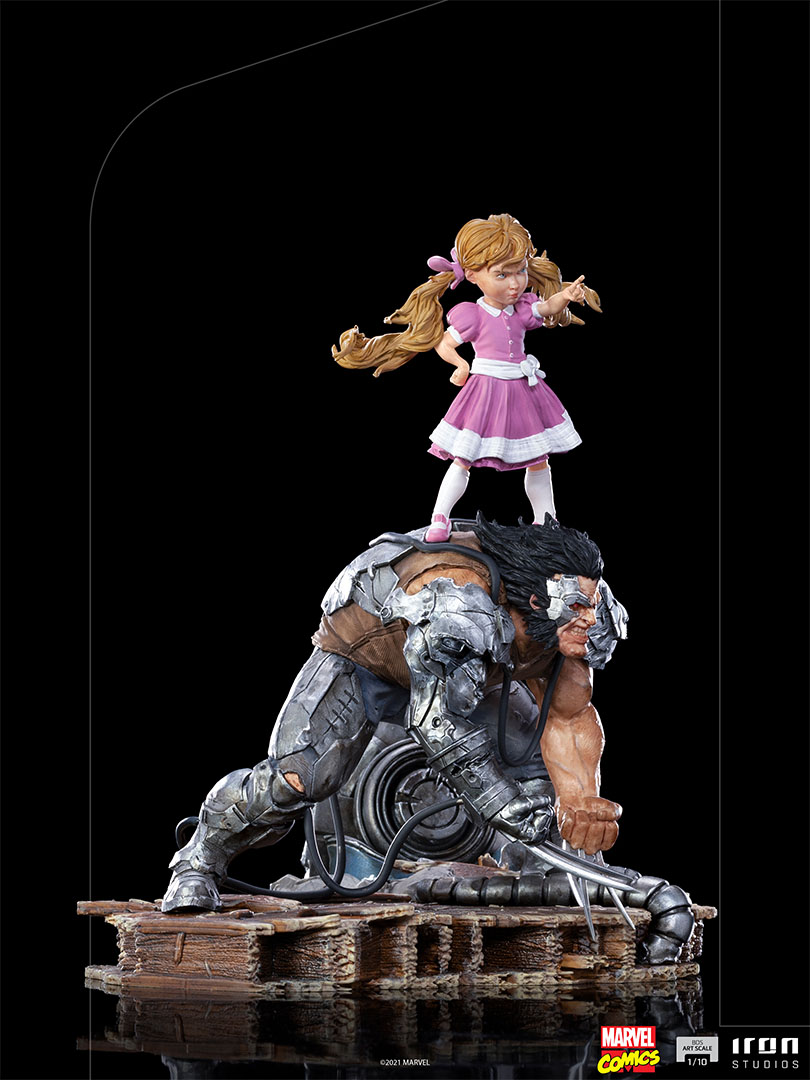 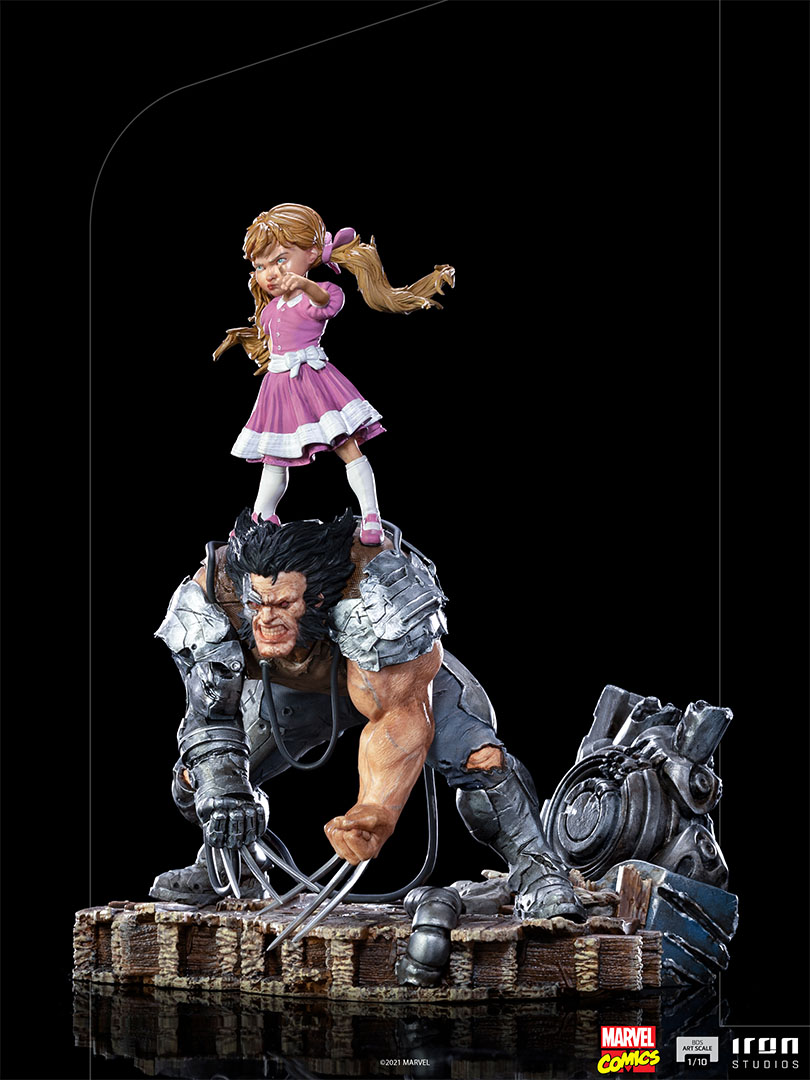 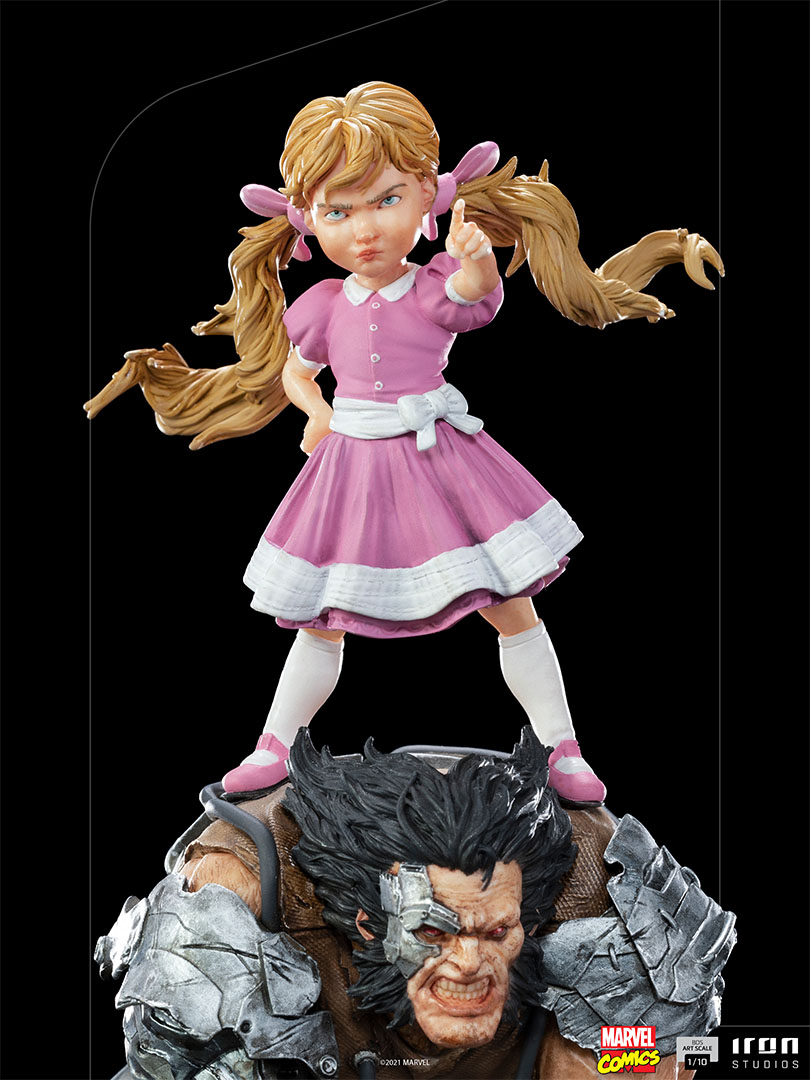 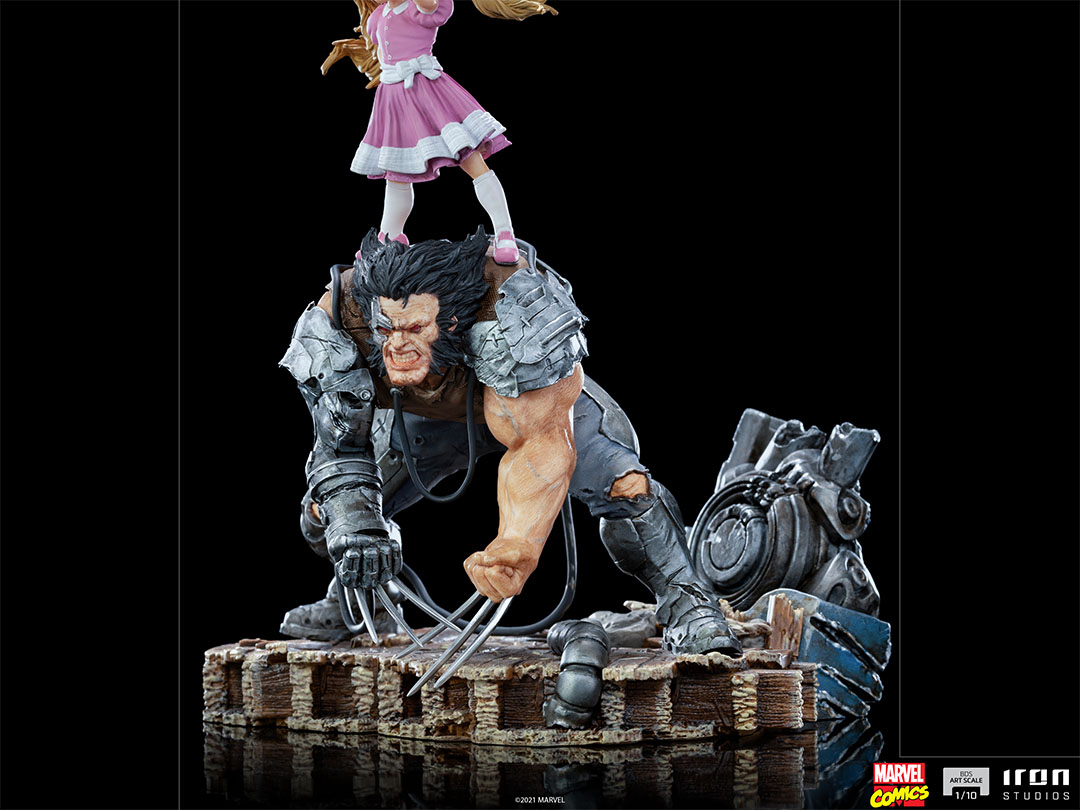 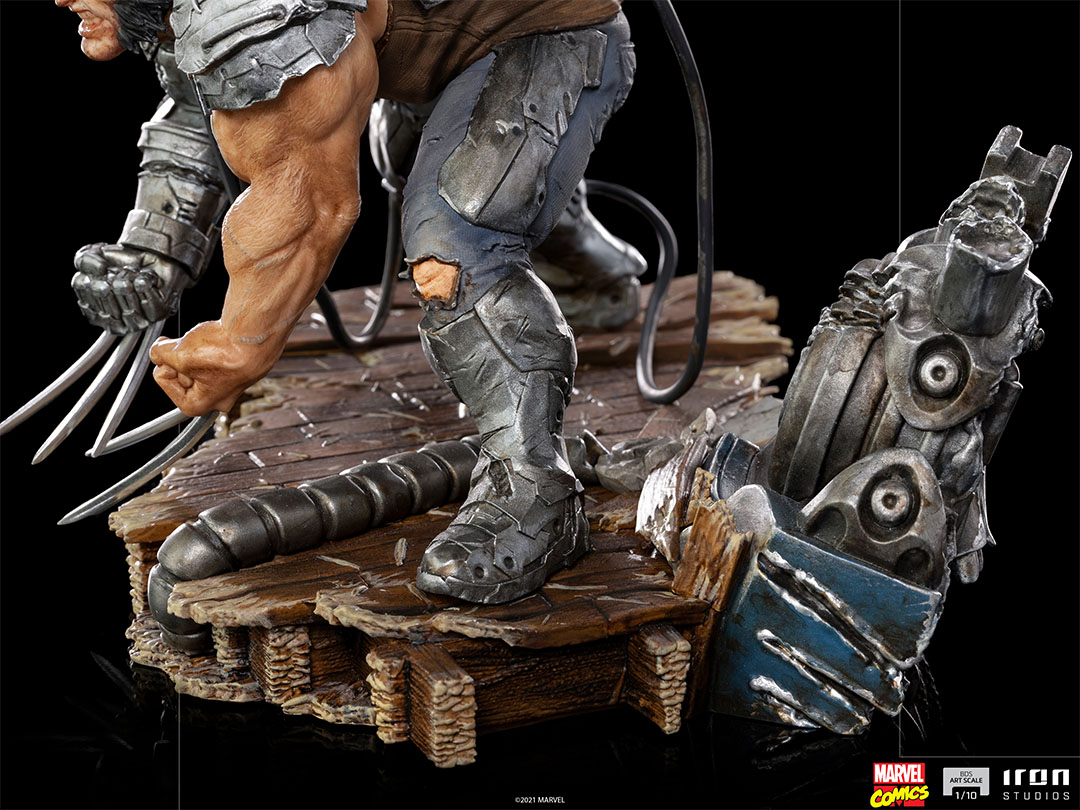 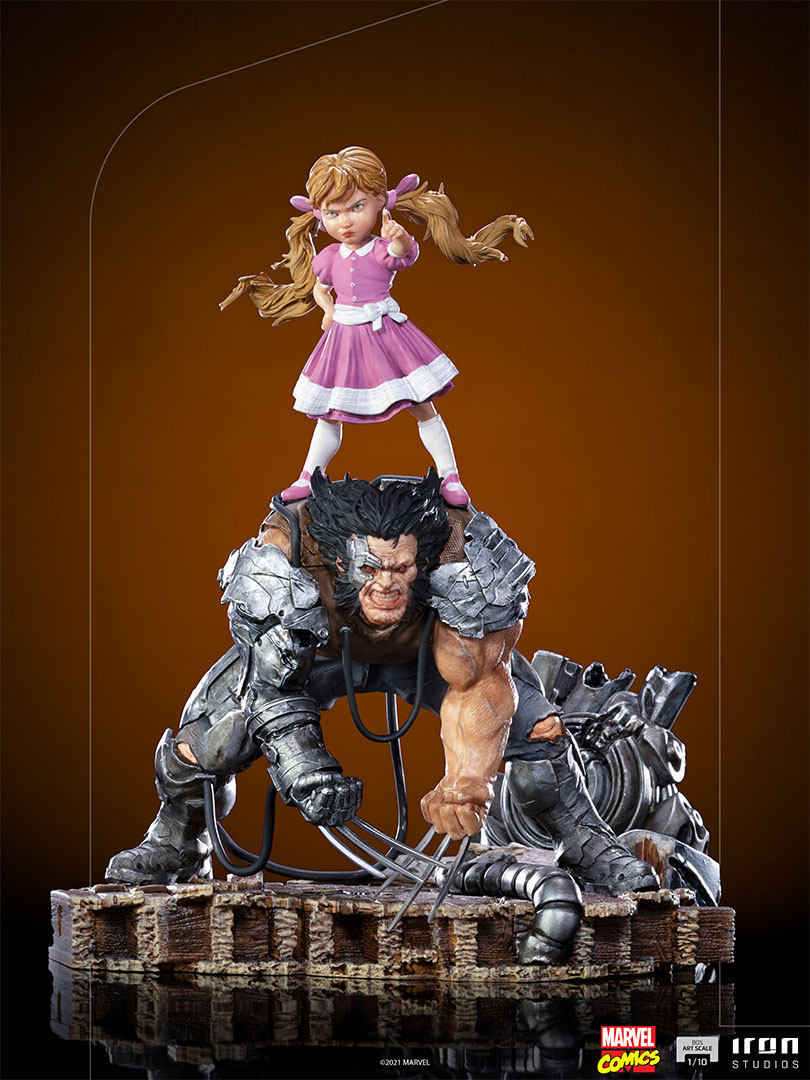 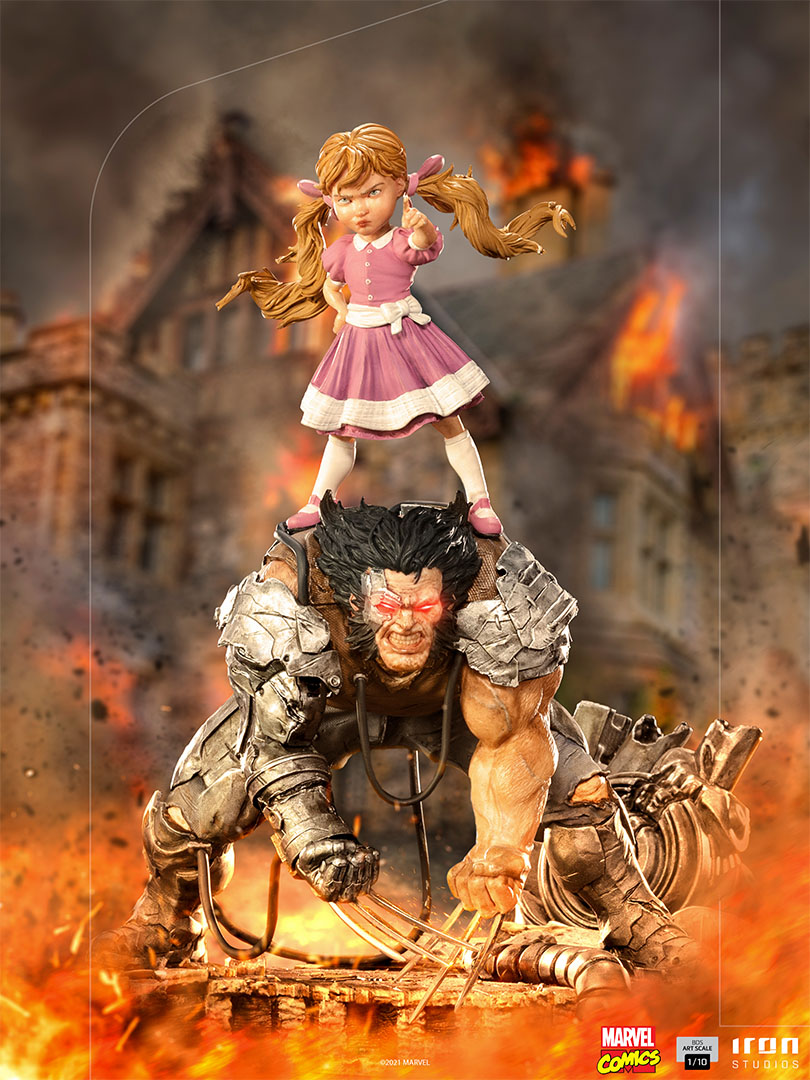 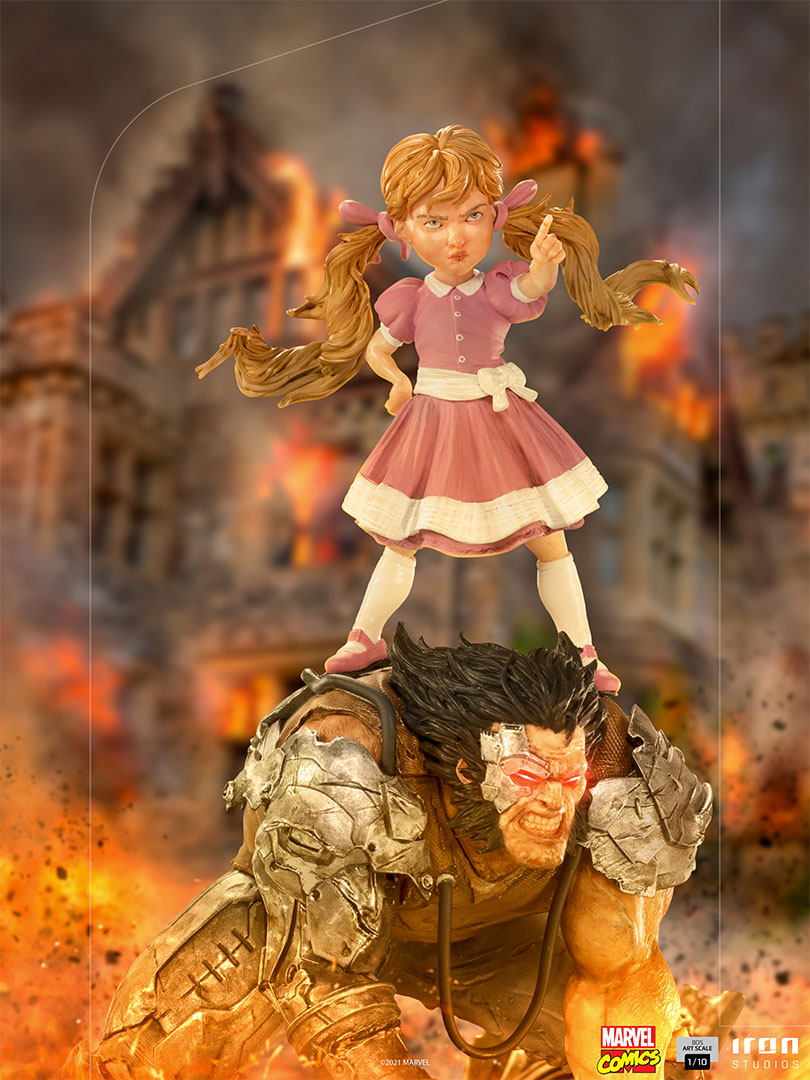 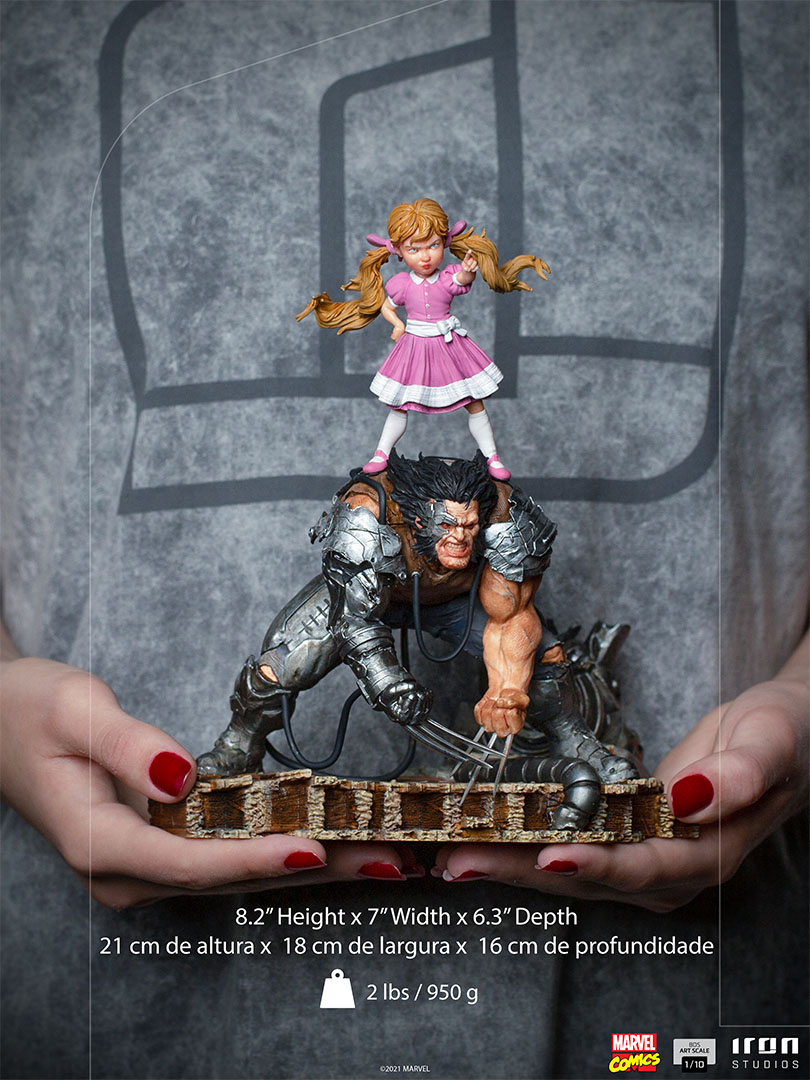 On the wooden foundation of the remains of Mansion X, an automaton replicated from the wild Canadian mutant named Logan unsheathes its claws from its fists and prepares its reconstructed half-machine and half-man body for imminent combat. On his back, a seemingly harmless little girl in a pink dress uses her advanced intellect to direct her counterpart, friend and ally, to join the group of mutant heroes X-Men against the gigantic Sentinel robots controlled by Magneto, and their allies of the Mutant Brotherhood. Thus, Iron Studios presents its statue ”Albert and Elsie-Dee – X-Men – BDS Art Scale 1/10” with the unusual android allies of Wolverine and the X-Men.

Created by cyborg supervillain Donald Pierce, the droids Elsie-Dee (a pun on LCD, for their artificial origin) with the appearance of a five-year-old girl, and their counterpart, Albert (a robot, copy of Logan), were designed to kill Wolverine. Thanks to the evolved artificial intelligence of Elsie-Dee and Albert (named after Albert Einstein), they come to the conclusion that Logan was a noble person and didn’t deserve to die, and thus, abandon their original mission and become eventual allies of the mutant hero. Elsie-Dee has superior intellect, can interact with computers, and has above-average strength. Albert has similar characteristics, claws like Wolverine (but not adamantium), fighting abilities, and reinforced armor on the metallic parts of his body.

Created by Larry Hama and Marc Silvestri in 1991, Iron Studios features never-before-seen statues of these characters, increasingly expanding the cast of characters that make up its diorama of the X-Men versus their greatest enemies, and each collector can create the diorama of his preference. The statue is already available for Pre-Order. Stay tuned for the many news that will come soon.