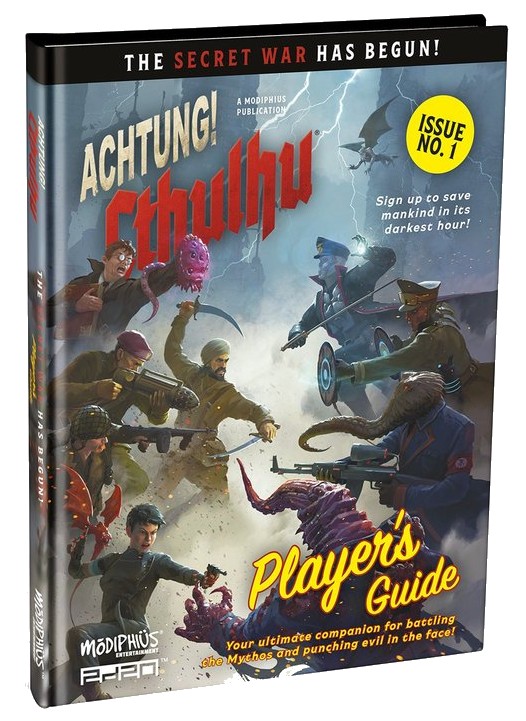 Welcome to the Secret War in this fast-paced pulp-influenced rollercoaster of an RPG which nimbly mixes the sanity-challenging terror of Lovecraftian cosmic horror, with the chaos and heroism of World War II.  Enter a world of audacious Allied agents, malicious Nazi villains and the unfathomable gods and monsters of the Mythos themselves, each striving for supremacy in mankind’s darkest yet finest hour!  Answer the call with the dauntless men and women of the Allied occult forces: Britain’s Section M, the United States’ Majestic, or the brave Resistance, all willing to make the ultimate sacrifice to hold back the legions of the Nazi occult.  Battle the Black Sun, Nazi warrior-sorcerers supreme, who use foul magic and summoned creatures from nameless dimensions to dominate the battlefields of men. Struggle against Nachtwölfe, the Night Wolves, who utilise technology, biological enhancements, and wunderwaffen (wonder weapons) to win the war for Germany. Can you prevail against such overwhelming odds, or will you succumb, like so many others, to the terror of the Nazi occult or the malign influence of the Mythos?  This is your story to tell!