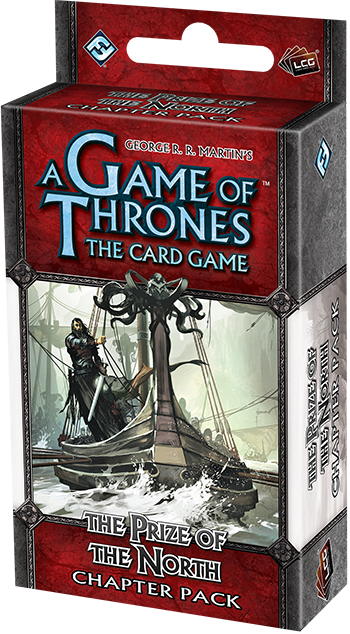 A Game of Thrones: The Card Game - The Prize of the North

Her life meant little and less to him. She was only his hostage, a prize to show the north that he could vanquish the iron born.
George R.R. Martin, A Dance with Dragons

The Prize of the North is the fifth Chapter Pack in the Conquest and Defiance cycle for A Game of Thrones: The Card Game.

The Prize of the North Chapter Pack continues the cycle's major themes, introducing fourteen cards with the Prized keyword and giving additional support to the possibility of multi-House or Neutral Faction decks. Every Great House in Westeros gains powerful cards, including a new Sand Snake for House Martell, powerful Warships for House Greyjoy, and a new version of The Wall for House Baratheon!

Among the sixty cards from The Prize of the North (three copies each of twenty individual cards), you'll find a host of new Prized characters, locations, and attachments, as well as a potent Prized plot, and three versatile new attachments. Whether you strengthen the bonds between the Great Houses to possibly build a multi-House deck or utilize the power of Bannermen, you'll find the cards you need in The Prize of the North!

An A Game of Thrones: The Card Game core set is required to play. Contains cards 81-100 of the Conquest and Defiance cycle.