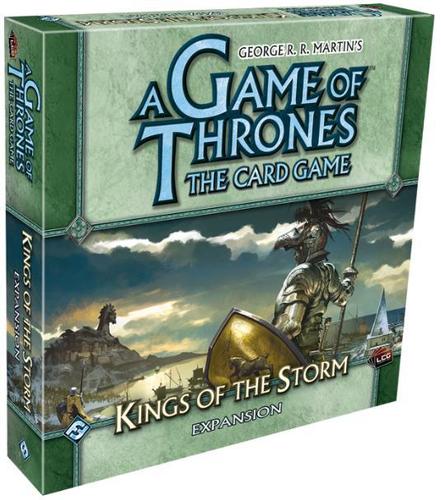 A Game of Thrones: The Card Game - Kings of the Storm

Ours is the Fury And what was Robert's thanks? He names me Lord of Dragonstone, and gives Storm's End and its incomes to Renly. Storm's End belonged to House Baratheon for three hundred years; by rights it should have passed to me when Robert took the Iron Throne. 
Stannis Baratheon, A Clash of Kings

The Kings of the Storm expansion showcases House Baratheon and brings the full power of the crowned stag to A Game of Thrones: The Card Game. This set contains 165 cards (three copies each of 55 different cards), including the three brothers feuding for the throne, Robert, Renly, and Stannis Baratheon, as well as the formidable Baratheon stronghold, Storm's End. Along with a wealth of new strategies, tactics, and deckbuilding options are essential cards for two exciting theme decks, Power Rush  and Knights of the Realm.  This is not a stand-alone game; a A Game of Thrones: The Card Game Core Set is required to play.