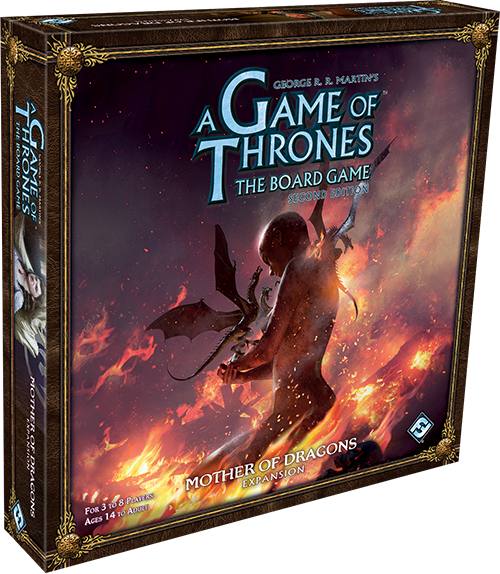 A Game of Thrones: The Board Game (Second Edition) Mother of Dragons Expansion

Soon after the Mad King fell and in the wake of Robert's Rebellion, the last two Targaryen children were forced to flee and hide in Essos. Now, King Robert is dead and the remaining lords and ladies of Westeros clamor to fill the space left behind on the Iron Throne. The time has come for the Targaryens to reclaim their birthright with fire and blood. With every ally and tool at their disposal and the long-forgotten fire of dragons, they will claw their way across the Narrow Sea and bring Westeros to its knees.

Cross the Narrow Sea with the Mother of Dragons expansion for A Game of Thrones: The Board Game!

Clawing their way into power, this expansion includes a side board of the Free Cities of Essos and an overlay of the Eyrie, as well as new characters and mechanics to bring House Targaryen and House Arryn into the fray. As you make your claim to the Iron Throne, you can call other Houses to your cause with the new vassal mechanic, or even ask for aid from the Iron Bank of Braavos. But be cautious, for the Iron Bank will have its due, and if your campaign proves to be a poor investment, the money lenders' retribution will be swift.