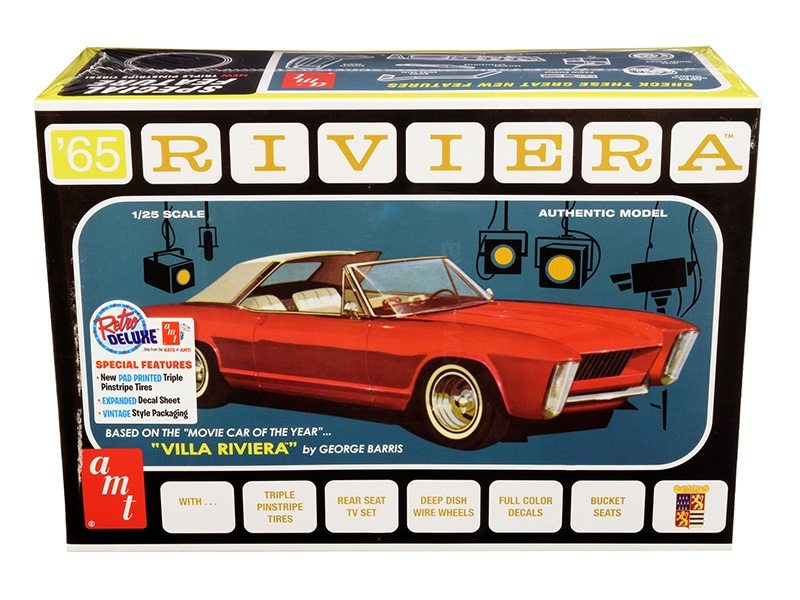 After decades of waiting, the Kats at AMT have restored the Villa Rivera Parts to the iconic 1965 Buick Riviera (3 'n 1) kit. Arguably one of the most beautiful American automotive designs of all time, the '65 Riv' is elevated to the stars with this amazing George Barris design.

The Villa Riviera began as George Barris’ personal car, a gift from Buick Division’s press fleet to “see what he can do with it.” Barris did a lot with it and as he did, he wrote a series of articles and photo documented each step of the customization in Hot Rod magazine’s 1964 Custom Car Yearbook.

Soon after it was customized and painted, movie producer Leslie Martinson selected it for use in an upcoming surf movie starring James Darren, Pamela Tiffin, Nancy Sinatra, and Bob Denver called For Those Who think Young. The Villa Riviera played a significant role in the movie as James Darren’s and his sidekick Bob Denver’s car.

Barris was a master promoter and never missed a chance to publicize the Villa Riviera. It became a well-known Barris feature car at shows. In 1965, AMT released a special version of its annual kit with custom parts and instructions to build a Villa Riviera model. A neat post card was included with the model kit, showing the fogged paint job.