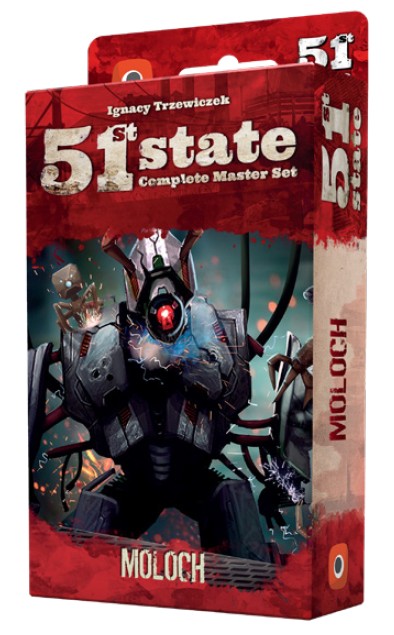 The Moloch State Pack is an expansion to 51st State: Master Set, which introduces a semi-cooperative experience.

It consists of 27 Moloch cards to be shuffled in the Base Set cards and 23 double-sided Machine cards.

Each round a number of new enemy Machines are deployed and threaten all the players. Players may fight the Machines using two new actions, by hacking or destroying them.

Hacking a Machine requires to pay the resources indicated in the Machine’s code, and lets the player who does the action flip the Machine’s card and build it as their own location offering that player a new ability. Another way to fight a Machine is destroying it, which requires spending Contact tokens equal to Machine’s defense level. It brings the player victory points.

If Machines are left in play, because no one hacked them or destroyed them, they will attack all players in the Assault phase and deal damage specified on the Machine’s card. Players may choose to work together fighting the Machines or face the dangers alone.