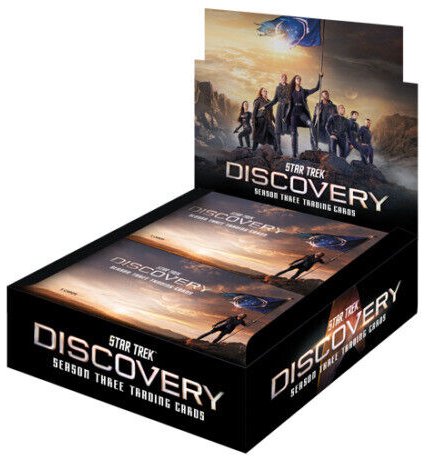 2022 Rittenhouse Star Trek Discovery Season 3 trading cards stick with a lot of the same focal points as the two previous sets. Autographs continue to land two per hobby box. Like Season 2, there’s also a memorabilia card per box. The checklist has plenty of other inserts as well that go together to make for a deep dive into the show’s third season and its characters.

2022 Rittenhouse Star Trek Discovery Season 3 Checklist Overview
The base set has 78 cards. Divide that by the season’s 13 episodes and that works out to six per show making for lots of summary space. Each card also has a parallel, which combine to land one per pack.

Autographs are available in a variety of formats and designs. These include inscriptions and autographed relics. The checklist features many of the show’s leads including Sonequa Martin-Green (Michael Burnham), Michelle Yeoh (Captain Georgiou), Doug Jones (Doug Jones), Michelle Wiseman (Sylvia Tilly) and Anthony Rapp (Stamets).

Relic Cards include swatches from costumes. More than 25 different cards are on the checklist.

Other insert sets include:

Dealers ordering several cases are eligible for exclusive cards not available in packs. These start with a couple of Dual Autographs for both the six- and nine-case incentives. The first, for six cases, has Wiseman and Rapp. The nine-case bonus has signatures of both Martin-Green and Jones.

An 18-case incentive also exists. This is a special Archive Box that has some exclusive autograph variations, Printing Plates and more.

What to expect in a hobby box: