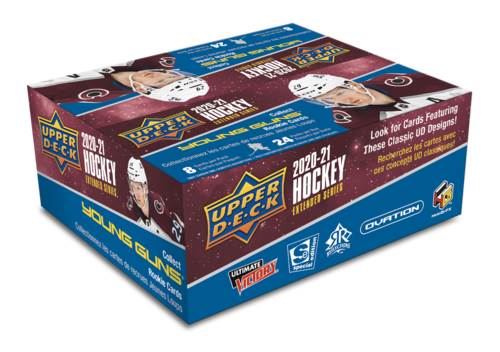 A unique season like the 2020-21 NHL season calls for a unique product. Introducing 2020-21 Upper Deck NHL Extended Series, which will serve as a continuation of the 2020-21 Upper Deck NHL edition started with Series I and Series II. Extended Series will of course include a new slate of Young Guns, in addition to a variety of brand new rookie content that will encompass the entire roster of rookies that were also found in series I and II. This fresh rookie content will be featured via a number of legacy Upper Deck brands, including such brands as UD3, Ultimate Victory, and SPX Finite to name a few.

• Complete your 2020-21 Upper Deck Base Set - the most cherished and widely-collected annual set in hockey!

- With more than 700 cards, including over 125 Young Guns®, this is the most extensive base set in the 30-plus year history of Upper Deck’s iconic flagship series.

• Also look for the continuation of the inaugural Dazzlers - Orange insert set. Collect cards 101-150 of this brightly-colored collection.

Rookie-Specific Cards (w/ Parallels)
Rookie content is based off of players who have qualified for rookie card status as of 2.12.21.

*Content, including the stated numbering and ratios, is subject to change.