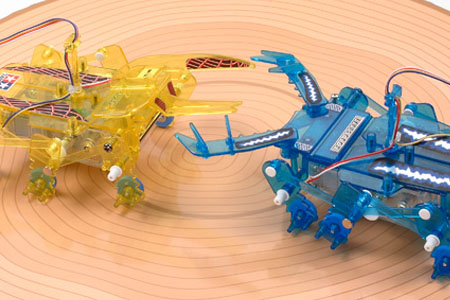 Tamiya's 2-Channel Remote Control Rhinoceros Beetle and Stag Beetle were extremely well-received when they were released earlier in 2007. Many fans were especially excited at how these robot beetles could be used in beetle wrestling matches just like the actual insects. Fans of all ages can now enjoy these fun competitions much more easily thanks to the release of this new convenient all-in-one set.

Set includes one 2-Channel Remote Control Rhinoceros Beetle and one 2-Channel Remote Control Stag Beetle, both featuring parts made from durable plastic molded in new eye-catching colors to distinguish them from the previously released individual items.
Forward/reverse and left/right movement produced by 2 motors in pre-assembled gearboxes, which are controlled by a 2-stick, 2-channel remote controller with self-neutral function.
Screwdriver is included to make assembly even easier.
Battle ring can be conveniently created from the set's package box for instant action.
New colorful sticker set included to enable fans to decorate their beetles and battle ring
Specs