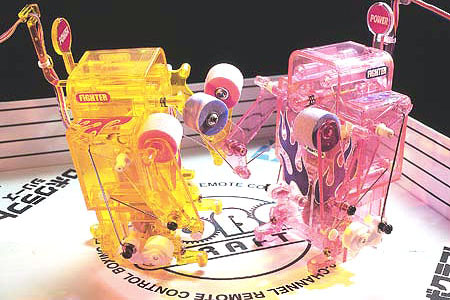 Match up with friends and family!

The Boxing Fighter now comes as a set of 2. The boxing fighter features a twin motor gear box enabling this little boxer to punch while moving backwards, forwards or turning to the left or right. The Boxing Fighter is also equipped with a judging plate that will allow you to decide who the winner of the fight is. The plate will lower each time you hit your opponent's mouth. When your opponent's plate is completely lowered, you win the fight. You can also adjust the level of each fighter, making it easier or harder for your fighter to be knocked down by fitting one or two stays to the bottom rear of the fighter. Assembly is very simple with use of screws and snap-lock parts. Packaging specially designed to be used as a ring, with a boxing ring printed on the inside.

Choose between a straight punch and upper cut

Through a simple adjustment the type of punch can be changed from an upper cut to a straight jab. You can also combine them for more tactical fights.

The remote-control allows you to control the two gearboxes. Each lever controls one gearbox. In no time, you will be able to make your boxing fighter go anywhere you want.

In order to give the Boxing Fighter a more aggressive look, set includes new stickers. Combined with the red and yellow tinted parts these stickers give your Boxing Fighter its very own unique look.

Hitting your opponent in the mouth will make the judging plate lower. When your opponent's plate is completely lowered, you win the fight.